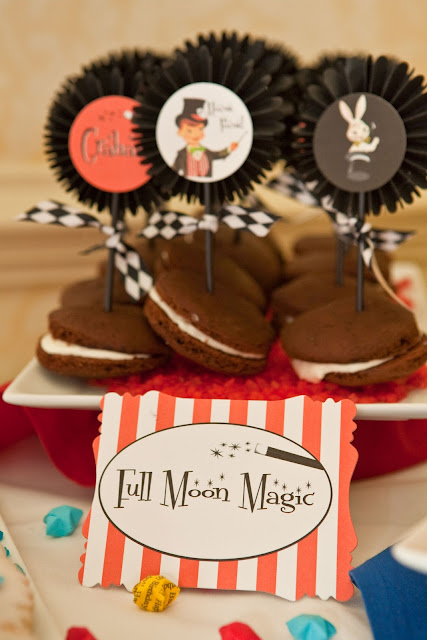 And next up…this wonderful MAGIC THEMED BIRTHDAY PARTY submitted by Lydia Menzies of The Party Wagon! SOOOO cute! I love, love, love the vintage magician tags by Loralee Lewis. Everything was put together so nicely, Lydia! Thanks for your submission! Congratulations on being chosen as today’s feature!

Here is what Lydia said about the party- “Abracadabra…Graham is 6! I recently hosted a Magic Party for my son. After seeing Mark the Magic Man several times at a lake resort near our home, my son asked if he could come to his birthday party!
As the guests arrived, they were greeted by magic carpets hanging from shepherd hooks on each side of the entrance. I used rolled canvas and cut out rectangles. Then, I handpainted a rabbit popping out of a black hat on each one (24 of them). I punched holes along each side of the mats and tied ribbon (girls) and raffia (boys) on the ends as fringe. My son requested one without any ribbons or raffia and so his was perfectly plain, just as he wished!Each child was fitted with a magician’s cape when they came in the door and were encouraged to make some magic!The activities included, Mix Your Magic- guests could mix primary colors in water to magically make secondary colors. Next, they could choose an animal to put in the small container to take home and watch magic happen (it would grow in water and shrink when out of water). My son wanted everyone to have a coin trick and so we set up a station with mini magician hats and a quarter. They had to try to guess where the coin was as the hats were switched around by my husband. We had a Magic Hat Parade- similar to a cake walk but the prize was a black top hat. I do this game a lot at birthday parties because the children love it and it keeps them moving- but in a circle!!Everyone had a snack and then watched the Magic Show. Each child choose his or her own “Magic Carpet” to sit on during the show. Mark the Magic Man was great at including parents and children- he kept them mesmerized for 45 minutes! Graham especially loved it when his daddy was turned into a ” monster”! After the show, we sang and had cake and then the magician tied animal balloons for everyone. The tied balloons were a BIG hit!

The colors were blue, red, yellow, and black. My son’s favorites are blue and red and so I incorporated them as much as possible. I asked my son to choose the cape colors and design- I thought he would choose red and blue but he wanted red and black with a yellow G and a star. The excellent capes were made by First Crush Designs. Graham’s cape was reversible with a G on one side and a star on the other. All other capes were red with a black shiny star and reversed to black. Graham chose to wear his cape with the G showing. I loved it that First Crush Designs made his cape extra-special!

The party signs, banners, favor tags, straw flags. rosettes, etc. were by Loralee Lewis. Loralee designed these especially for this party, and I was thrilled when the package arrived. I loved what she created! She made us feel so special!! We used Abracadabra! Graham is 6! for the banners and the straw flags, rosettes, and food flags.

Large, modular origami stars in red, blue, and yellow were used for the centerpieces at the tables. I put them in white pots and filled the pots with magic crystals (rock candy crystals) Small, customized origami stars were sprinkled around the pots. The small stars read, “Happy Birthday” and “Graham is 6”. I also had 3 of the large, modular stars hanging together over the “Magic Potion” table, just above the silver bowl that billowed with steam from dry ice. Placed on a mirrored cube out of reach of the children, the smoking bowl had a magical effect. The stars hanging above it was a fun and perfect touch. We all loved these stars made by Origami Delights! They were sprinkled on each table at the party. I loved seeing how the children played with them and rearranged them all around the tables. I think there was some color sorting going on! I saved them to use over and over.

The Magic Potion Table had cream soda as the potion. The customized labels were by Loralee Lewis. I loved these labels and the little rabbit for the top of the bottle! Striped straws with flags made the potion more fun! I used a red tablecloth and placed 20 orbs around the bottles to light up the table. The bottles glowed against the orbs for another magical effect.

The food table had the beautiful birthday cake as the focal point. The topper was a rabbit coming out of a black hat made by Brittany of Edible Details. The cake was baked by Chef Patrick Dezii and he added fondant circles cascading down the 3 tiers and flowing to the word “Abracadabra”. I loved how the word Abracadabra was off center- it added to the mystique! He also added cards scattered about the circles. The cake was really adorable. The table sign read… “Vanishing Birthday Cake…watch it disappear!” It disappeared fast!

Chef Patrick also made Full Moon Magic (moon pies/whoopie pies), Magic Wands (fruit kabobs topped with star fruit slice), Alakazam Cookies, Lucky Star sandwiches. All of those were plated on a bed on magic crystals in red, blue, and yellow. We also served popcorn, pretzels, and bugles in “Floating Wizard Hats” which were hung on a metal stand using fishing wire to seem invisible. The cones were kindly sent to me by Deanna of Mirabelle Creations. Stickers by Loralee Lewis.
When the cake was served, the children could also “pull a rabbit from the hat” which was a push pop with vanilla ice cream with a cardstock bunny on the front. They were served from a black top hat and the rabbits peeked over the top of the hat.
For favors, the children could take home their capes, hats, and magic carpets- we also gave each child a magic wand and cookies that were decorated to look like a card with the number 6 on it. Chef Patrick also made one with a joker on it. They were bagged, tied with ribbon and raffia, and topped with a favor tag from Loralee Lewis.

It was a magically fun time! The best part was the conversations my children had for at least a week after the party about “what if I were magic and…”
I also love it that my son wants to wear his cape and hat for Halloween! Maybe he will turn all the goblins into candy!” 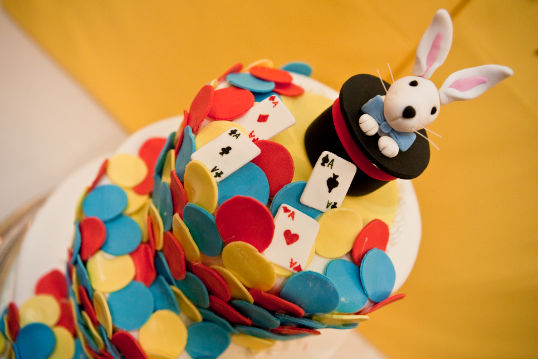 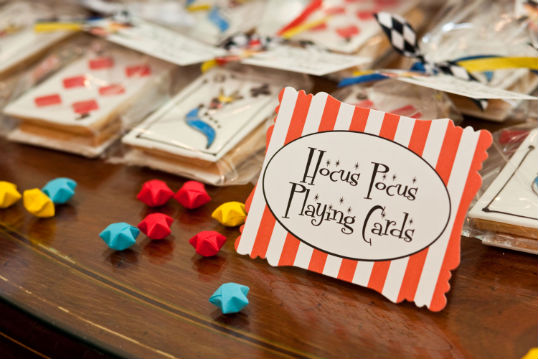 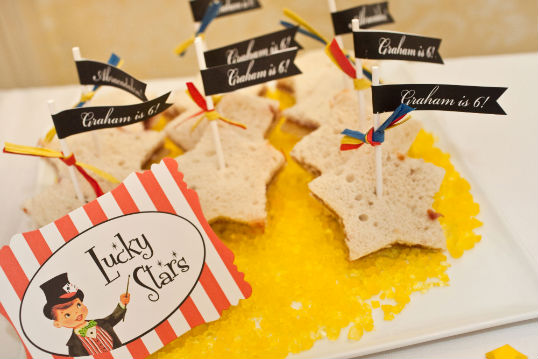 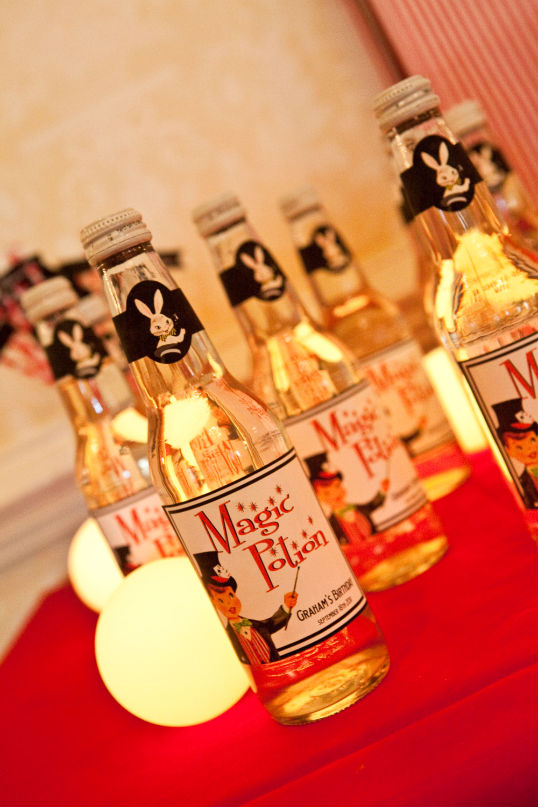 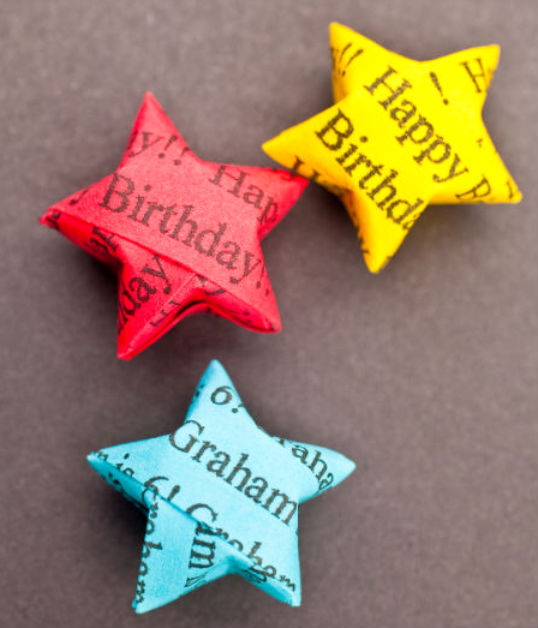 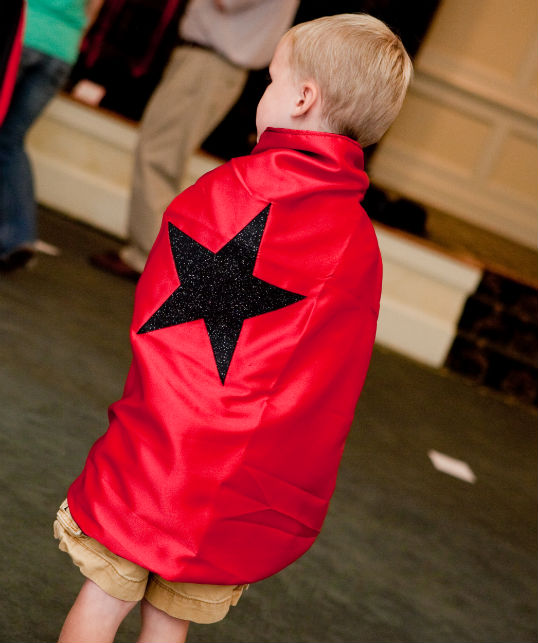 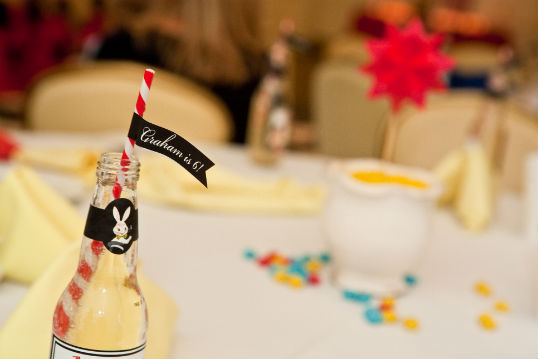 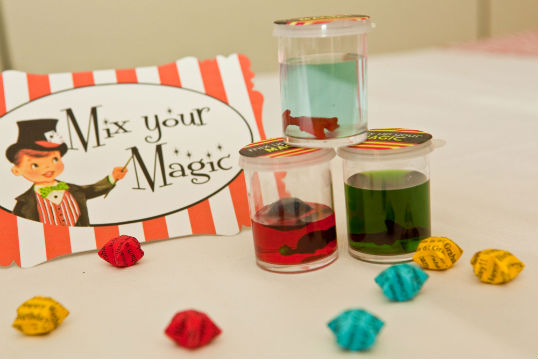 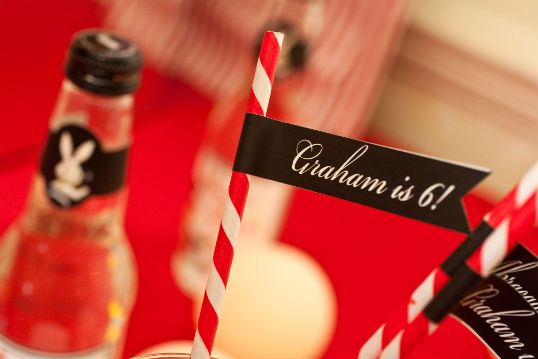 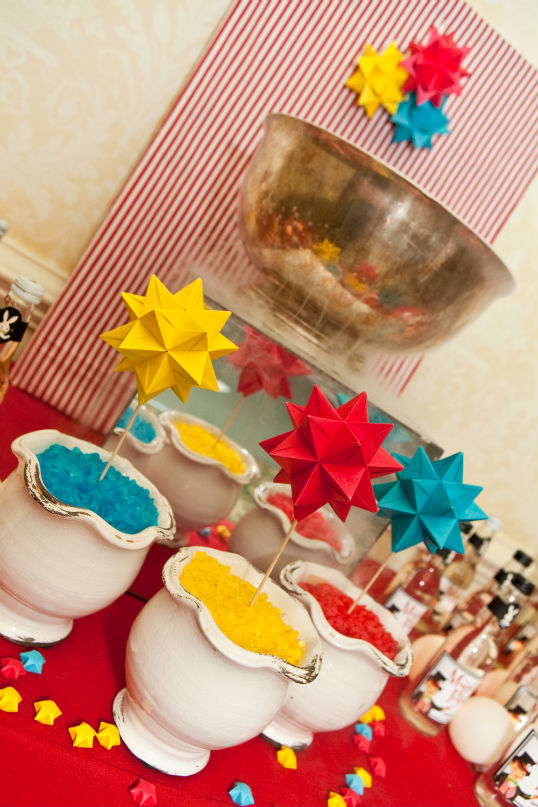 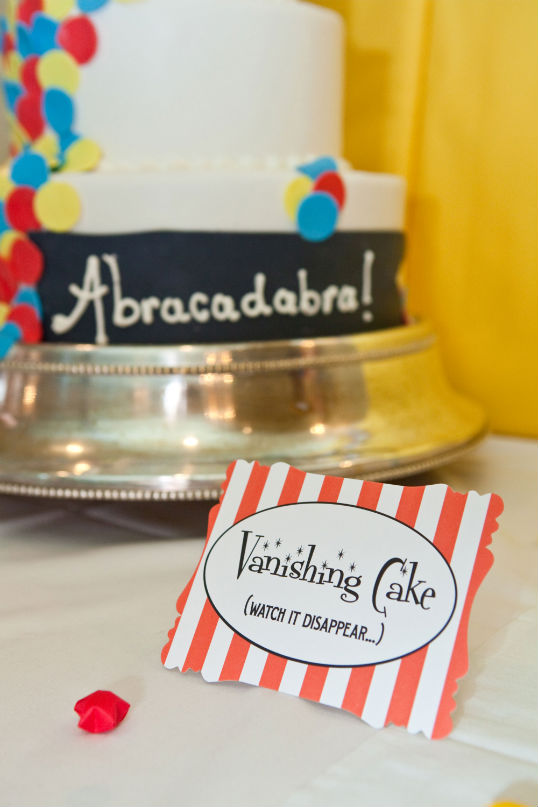 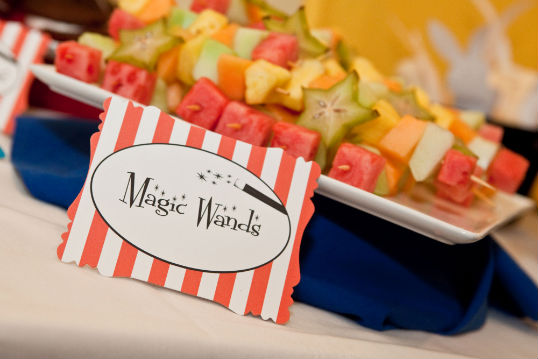 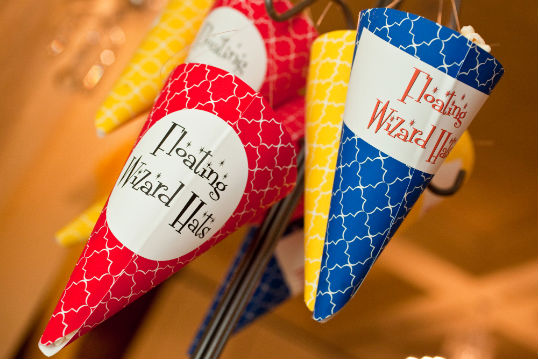 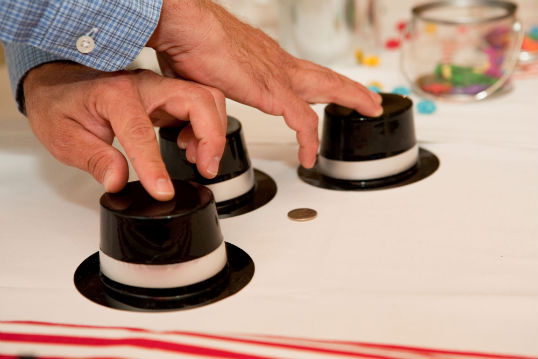 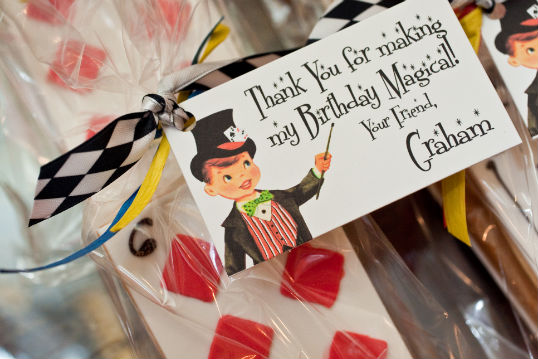