This BUN IN THE OVEN BABY SHOWER + BABY SPRINKLE submitted by Sarah Crawford of Lil Hoot has got to be one of my most favorite parties yet! HOW creative and just simply ADORABLE! A lot of the food and desserts were set up on toy kitchens. And most of the creative titles, labels and tags were play on words, having to do with baking. So. Cute.

“As soon as my friend and colleague Stacey (a fabulous baker/owner of Sugar on Top) became pregnant with her second child, I wanted to throw her a Bun in the Oven Sprinkle. It could not have been a more perfect theme for my sweet baker friend!

I used a lot of plays on words like the banner that read “Let’s toast the bun in the oven!” which I hung over the vintage toy kitchen that we gifted the baby to be. We placed a sign on the kitchen that read “Baby Butler’s kitchen- Grand opening February 2012”. Guests were also asked to write Baby Butler a message “pretty please with sugar on top”. I kept everything on the toy kitchen on a small scale using small baking dishes and ramekins in bright colors, and even used measuring cups to display the cookies!

We also set up another toy kitchen, as well. I used an aqua quatrafoil contact paper to line the shelves of both kitchens. They were also both covered in sweet treats, while champagne was kept cool in the “sinks”. Plus, Mommy-mosas and Belly-inis, as well as Preggers Punch were offered in sugared rimmed aqua champagne flutes.

An adorable red velvet aqua cake with pink and red sprinkled hearts { inspired by Sprinklebakes} was lovingly baked by Pickwick Baking Co., as well as brioche Cinnamon buns and delightful macarons in 5 vibrant colors/flavors. I even put the guest of honor (Sugar on Top) to work and had her bake some of her delicious sugar cookies in stripes and polka dots to match the party decor, as well as cake pops with sugar on top. One display of the cake pops was in a pink toy toaster with a label that read “Cake pops- the best thing since sliced bread”.

I made a garland using baking twine and cupcake liners (inspired by the blog Hey Look) to decorate the space as well as hung brightly colored whisks and spatulas with multi-colored ribbon from the ceiling. Graphic Designer Extraordinaire, Jayme Marie, created all the fabulous paper goods – using a diner font for all the menus and the most darling graphic of a vintage oven with a bun in it! As usual, the amazingly talented Meredith Nelson captured the joyful spirit of the event perfectly and also managed to snap a few shots of Stacey holding a fresh-baked bun in front of her bun in the oven!

Guests were given brightly colored polka dotted pot holders by Jessie Steel, which also held the napkins/utensils. The favor tag read “Thanks for the sprinkles of love for Stacey and her bun in the oven” tied with baker’s twine.” 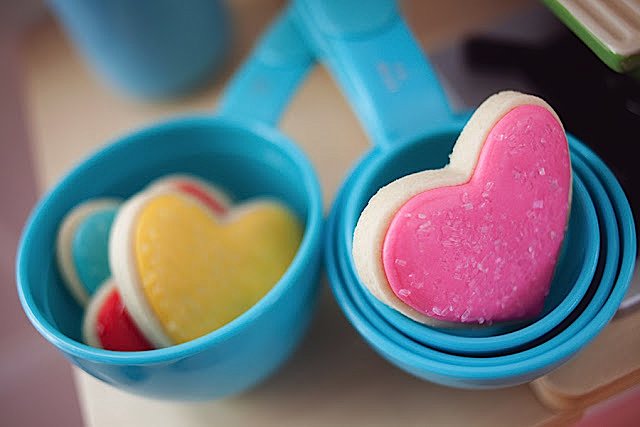 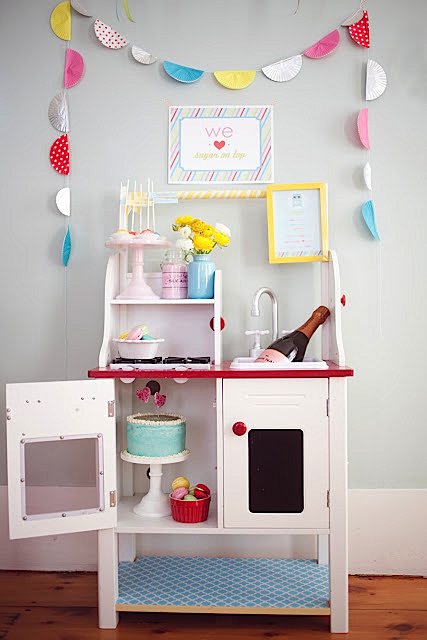 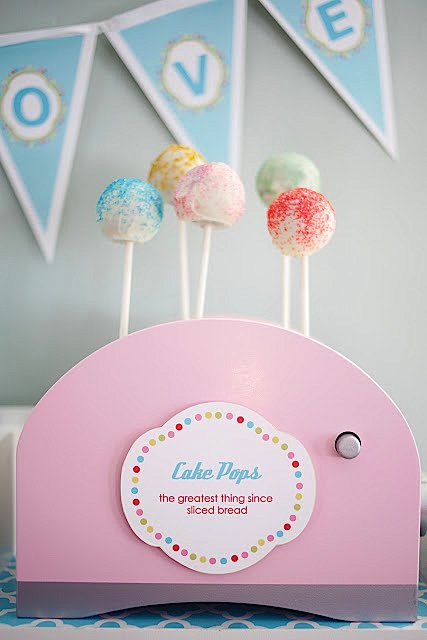 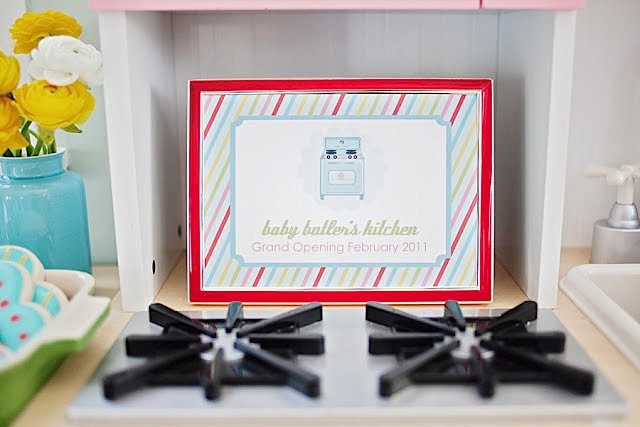 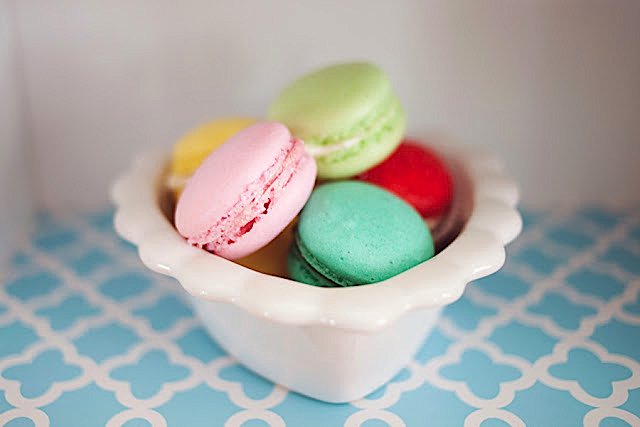 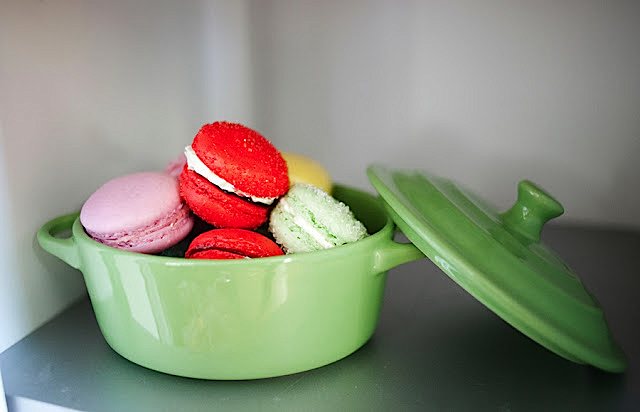 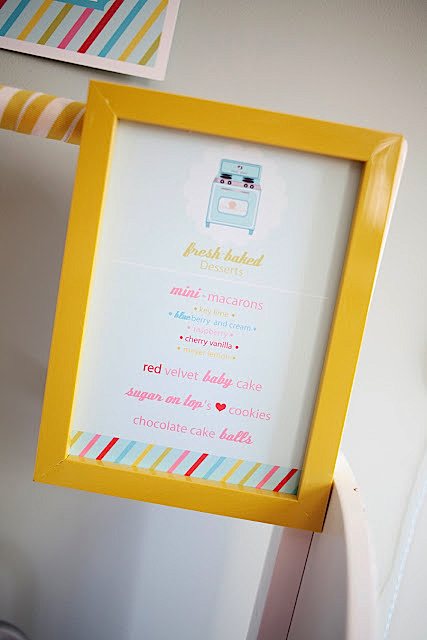 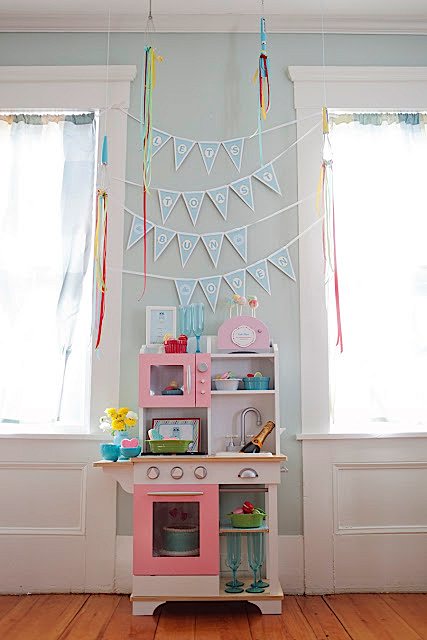 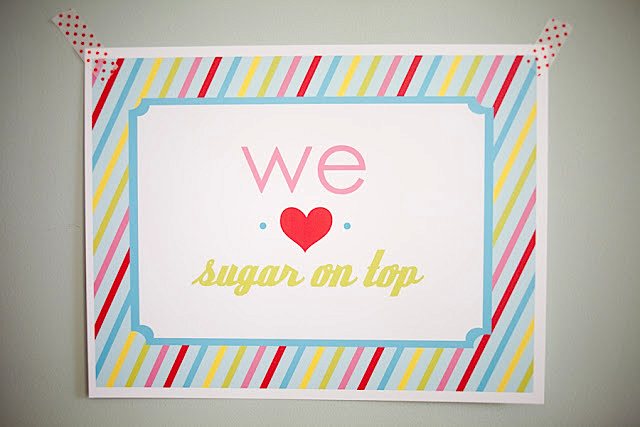 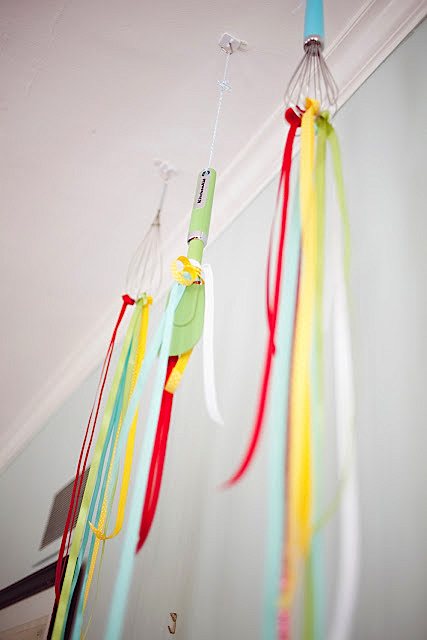 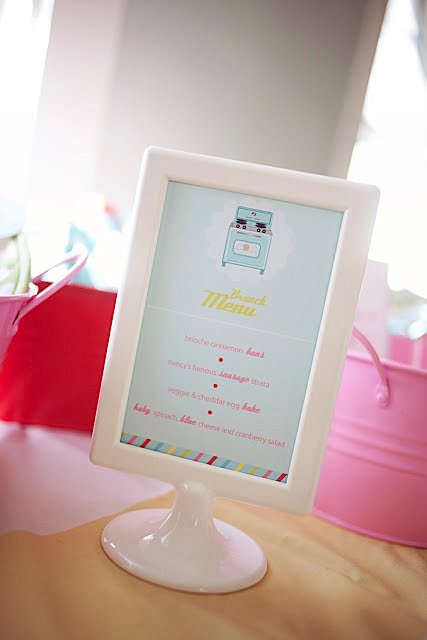 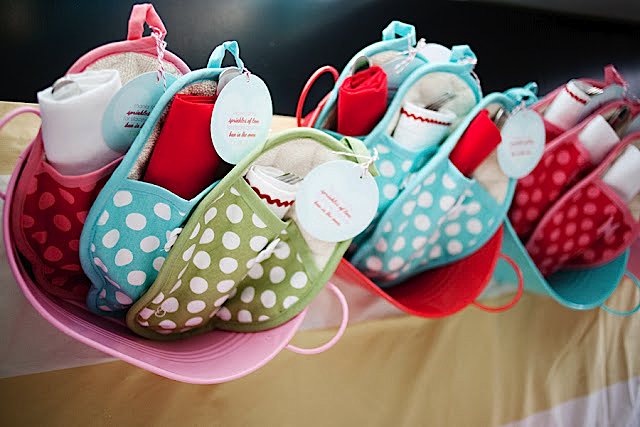 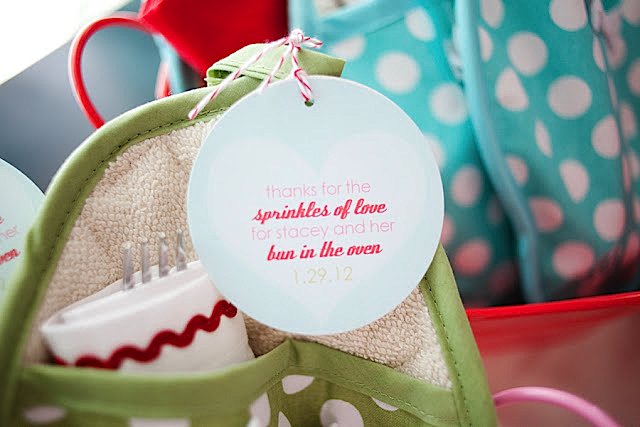 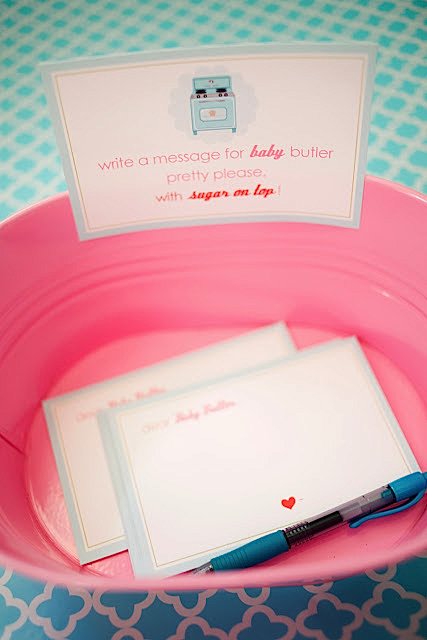 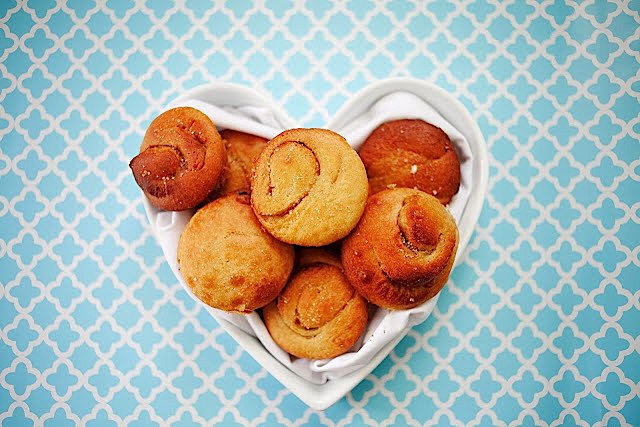 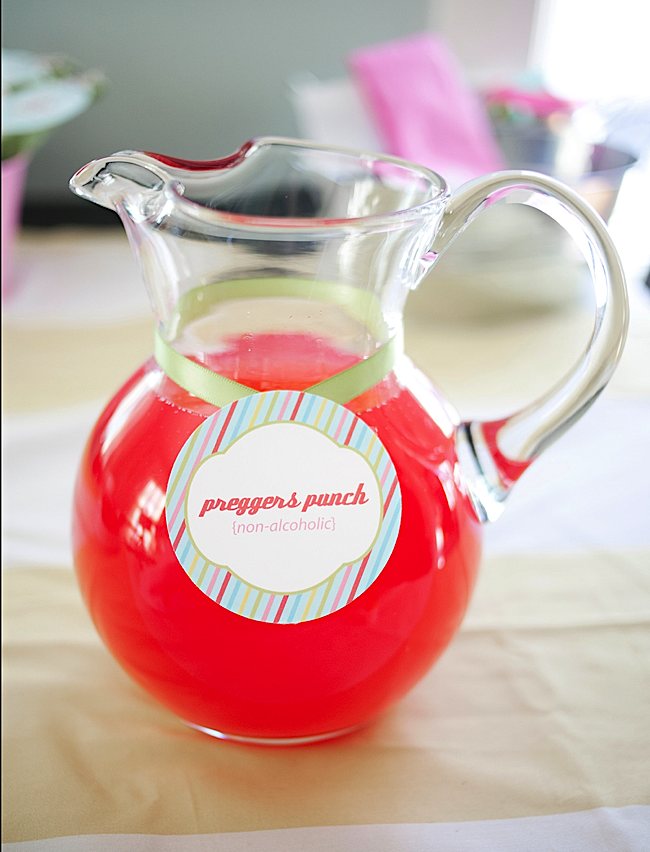 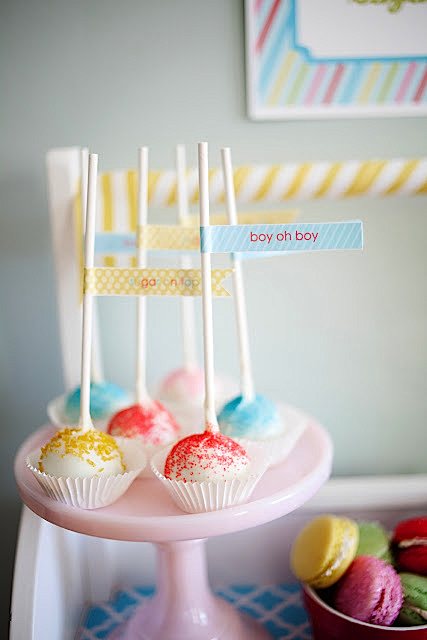 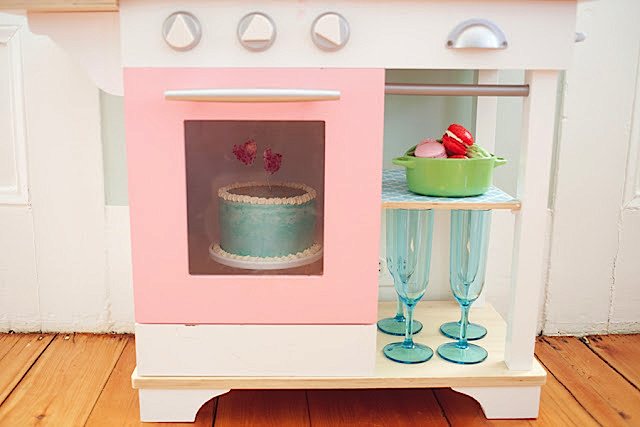 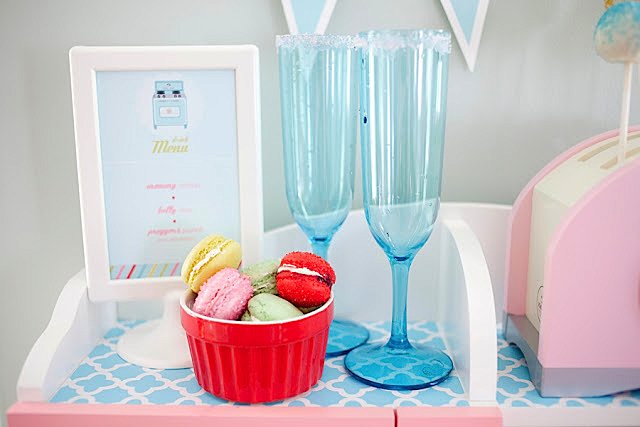 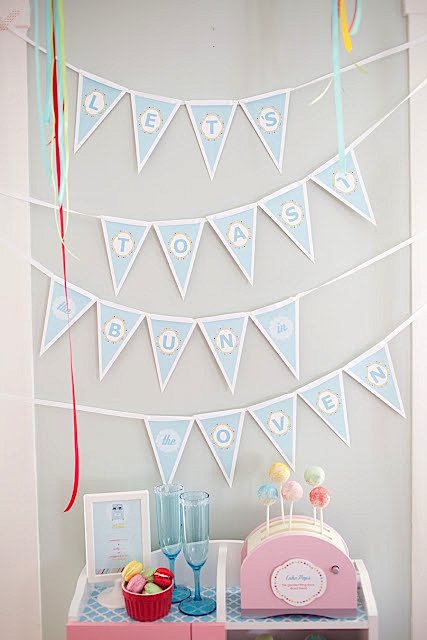 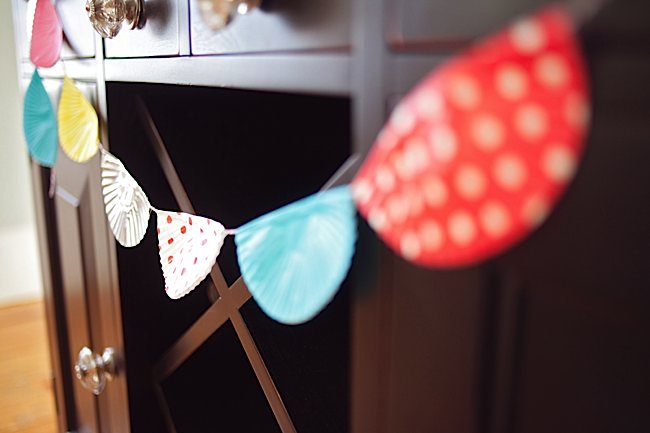 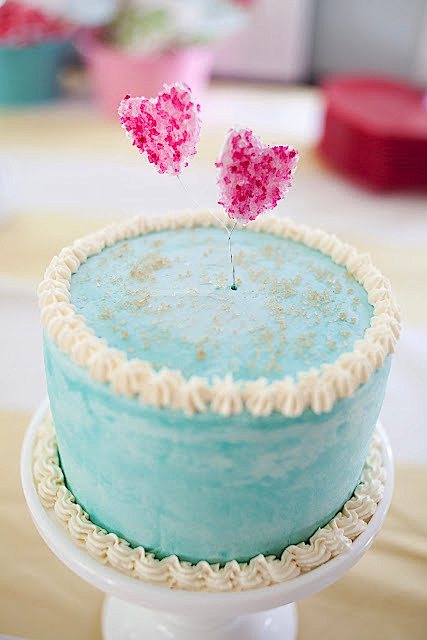 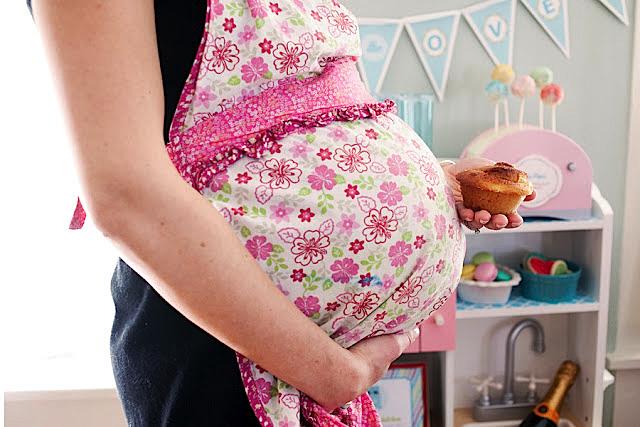