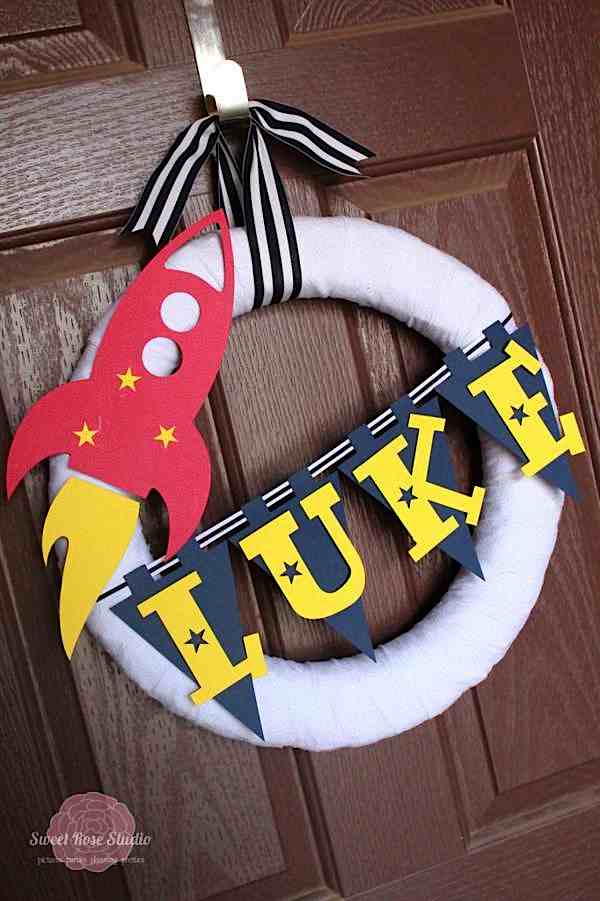 Blast off into the sky today with this darling ROCKET SHIP + SPACE 4TH BIRTHDAY PARTY submitted by Katie Waltemeyer of Sweet Rose Studio! 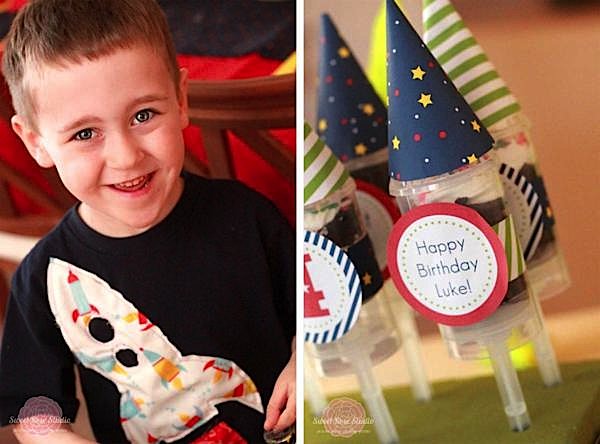 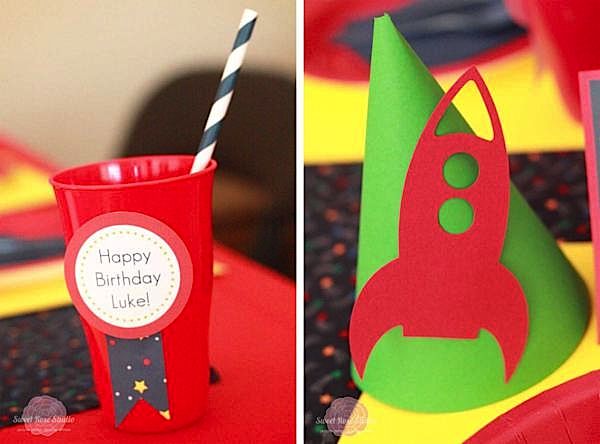 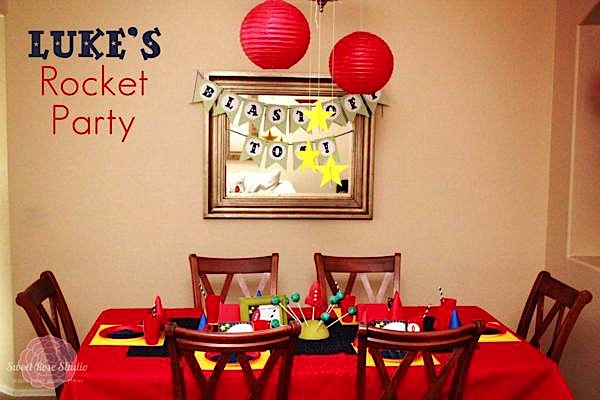 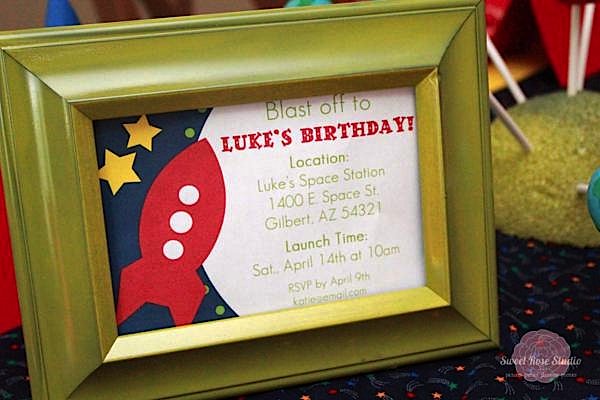 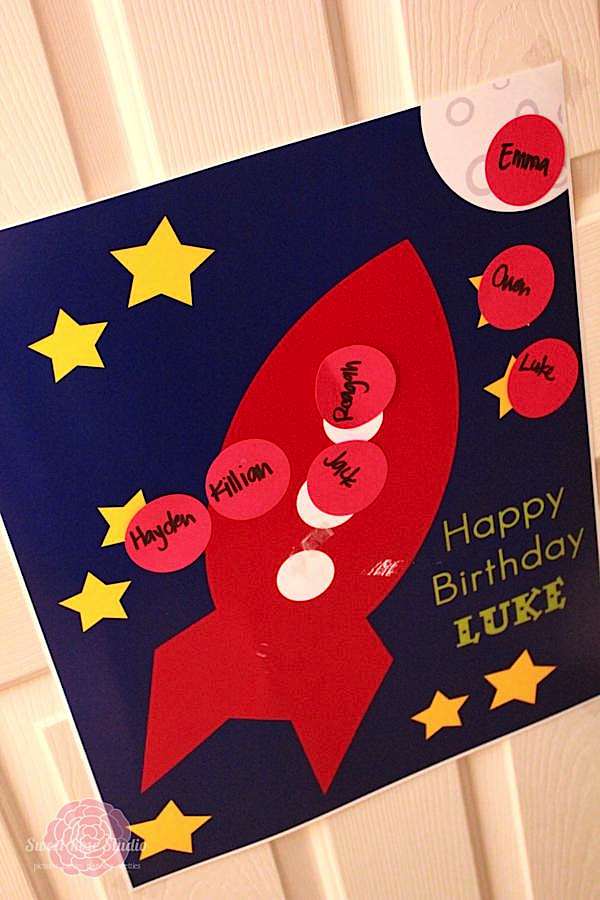 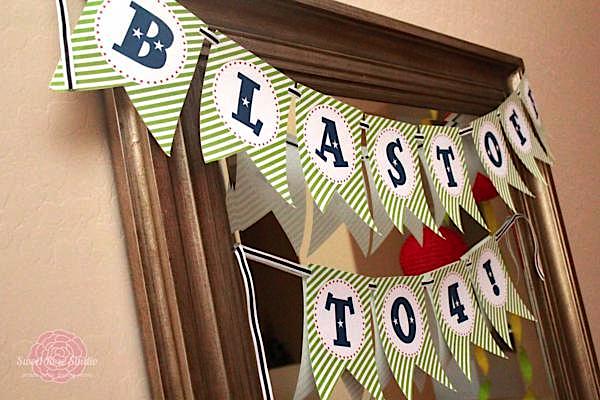 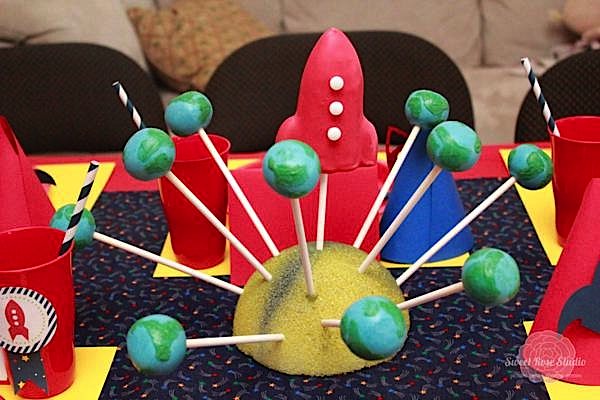 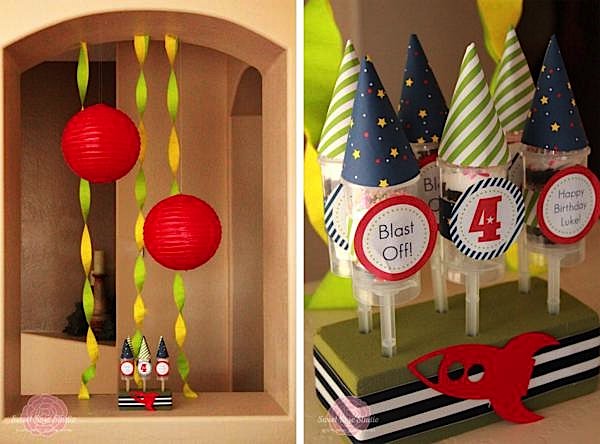 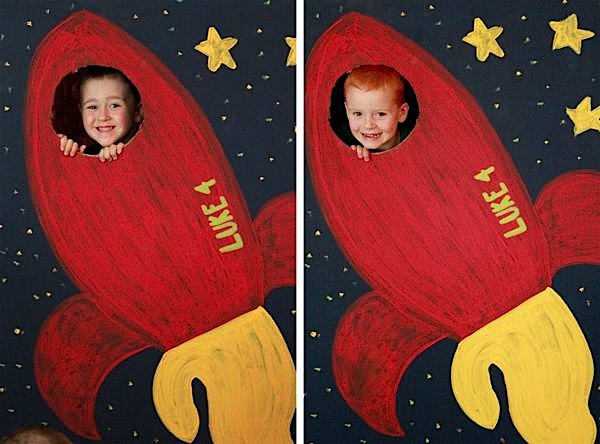 Here is what Katie had to say about the party- “I set up the party in our formal living and dining room space {due to crazy inclement weather} and each child had their own special seat of honor. I used coordinating fabric as the table runners and 12 x 12 sheets of scrapbook paper I had on hand as placemats. Easy-peasy and inexpensive!

After searching high and low for Rocket Party printables since that was Luke’s requested theme and not finding what I wanted, I ended up designing my own. I loved that each kidlet was able to find their own place at the table and the place cards served another purpose later on in the party too!

Each child was given their own inexpensive plastic cup that I adorned with party circles that would typically be used for cupcake toppers and I put together party hats for each of the kidlets, which were quite the hit of the party.

What party is complete without a fun banner? I love that this banner incorporates the theme not only in appearance, but in phrasing too. The striped ribbon really helped to give the banner that extra special touch.

I am in *love* with how the centerpieces of the table turned out and I have my dear friend Traci of Treats by Traci to thank for it! I cut a Styrofoam ball in half and spray painted it to have that planet-feel and can you believe those little Earths and the rocket are cake pops?!? For an extra pop of fun and color, I added a copy of his invitation to the table in a clearance frame that I spray painted to match the decor.

I knew that I wanted to incorporate push-up pops and making them look like rockets was a match made in a party-planners heaven. And what’s the perfect solution on how to display these super-cute push-up pops? Spray painted floral foam, of course! To make it better match the theme, I adorned the foam with striped ribbon and a die-cut rocket.

Since I like to be inexpensive {not cheap!} and because I love a good sewing project, I whipped up this super fabulous rocket shirt for Luke to wear to his party and he still loves to wear it two weeks later!

The rocket photo booth ended up being a hit and each kid was able to have their picture taken inside and those pictures will be sent with their thank you notes as a reminder of the fun they had. I created the photo booth from an old television box and acrylic paints, using the invitation as inspiration for the design. The kids were also able to create their own space-inspired foam bookmark and when they were finished, the bookmark and their cup went into a white lunch sack and their place cards were stapled to the top so each child knew whose bag was whose. The kidlets that finished early even got to decorate their bags with space stickers. Finally, I designed a Pin-the-tail-on-the-Donkey-esque Rocket game and had the guests try to stick their name on the windows of the rocket.”