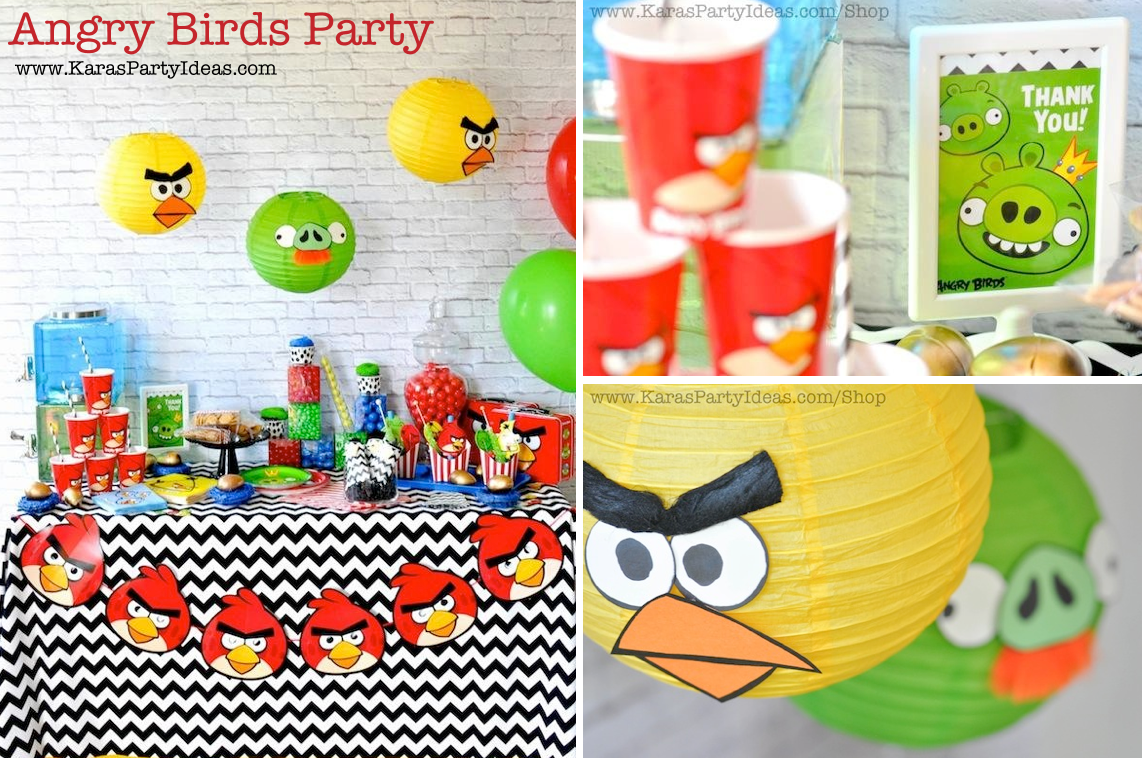 Today I’m showcasing the modern ANGRY BIRDS THEMED BIRTHDAY PARTY I recently styled! With the Angry Birds game being more popular than ever children are starting to ask for Angry Bird themed birthday parties…. so I thought it would be fun to style a party for you, showcasing some fun Angry Bird party ideas, tips & tricks. Find the vendor list at the bottom of this post! 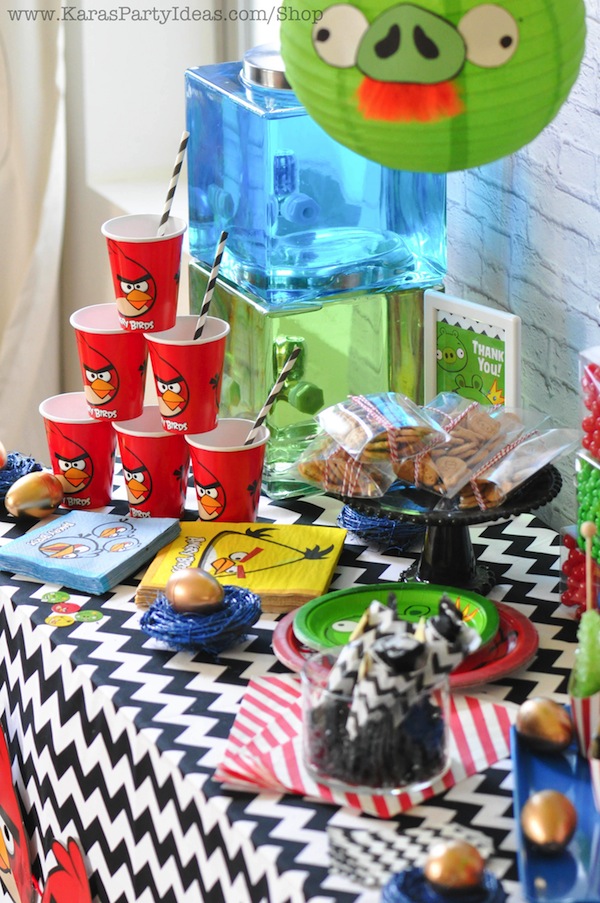 I set up the main party display on a table covered in black and white chevron fabric. 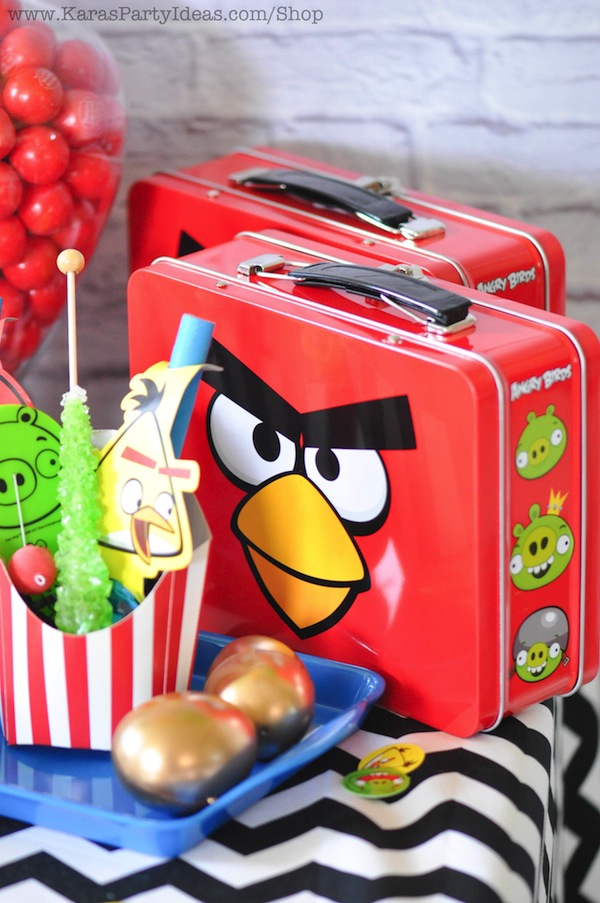 Angry Birds balloons were tied to the side of the main party table. 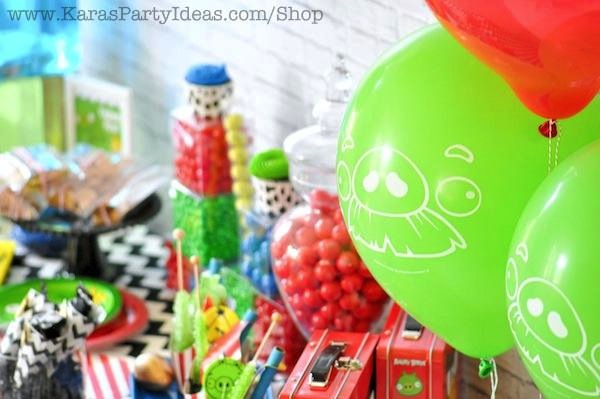 An Angry Birds thank you card was placed in a standing white party frame. 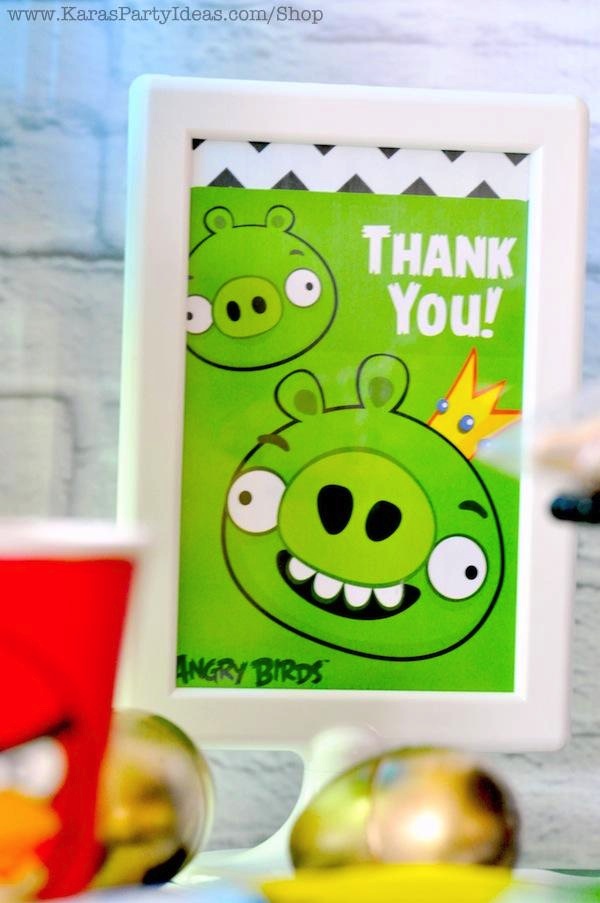 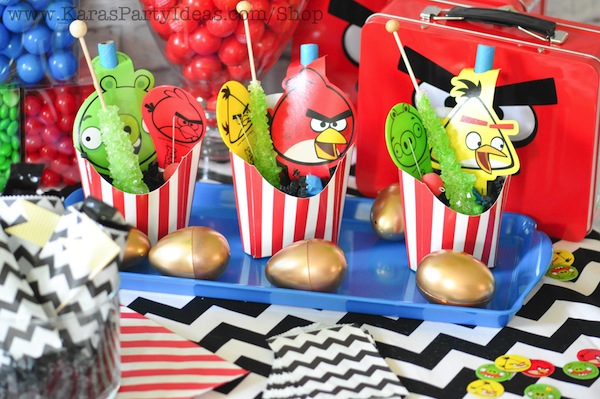 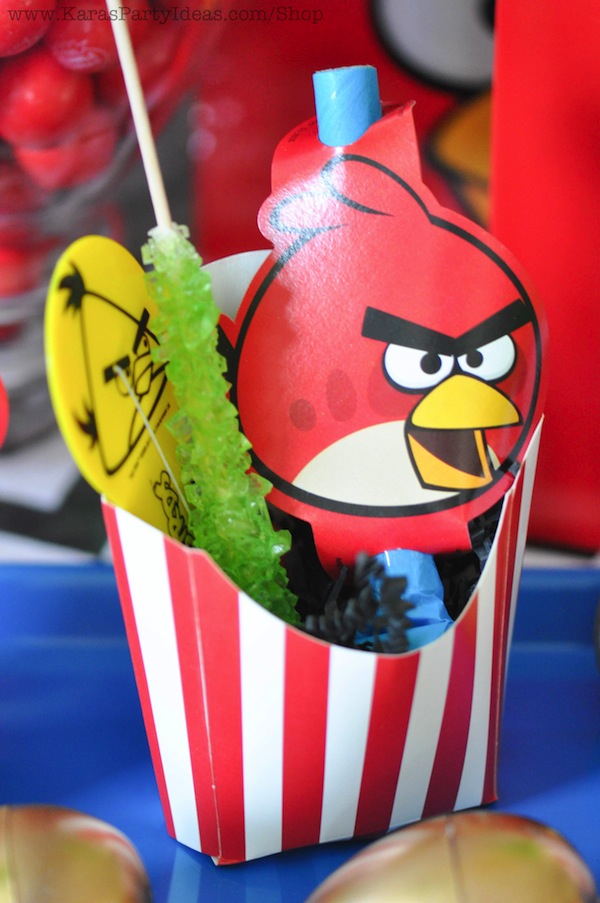 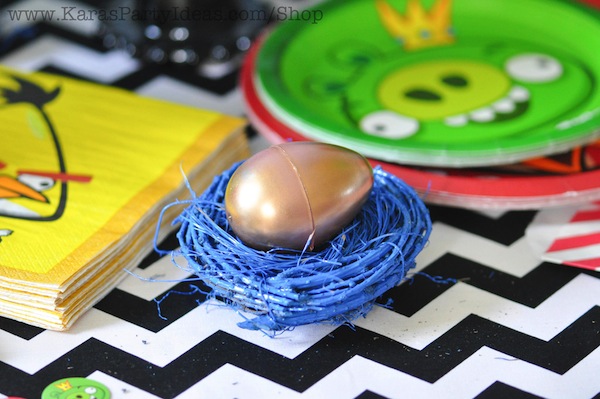 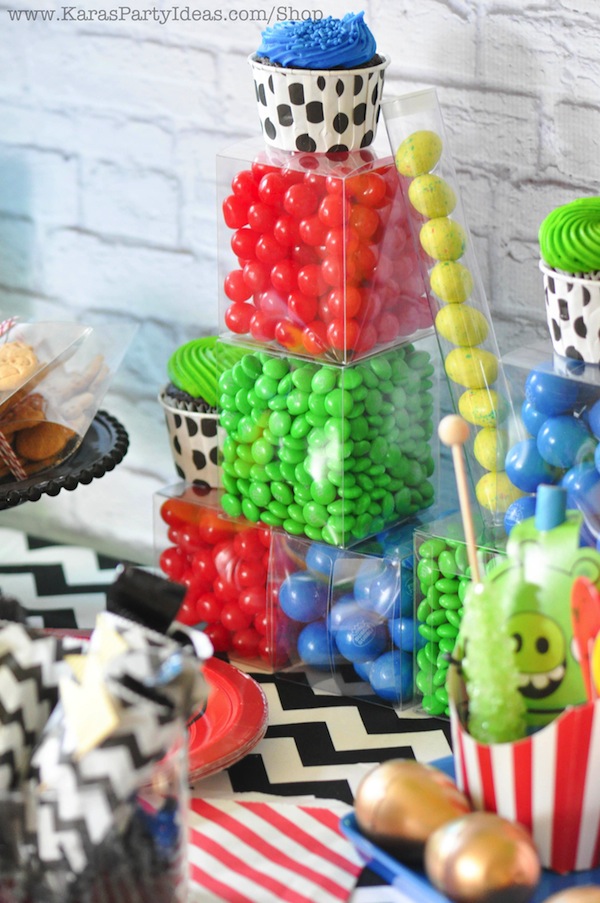 I filled clear favor boxes  with various colored candy {matching the party} and stacked the candy filled boxes to create an Angry Birds game look. I finished off the look with gumball tubes filled with candy eggs and cupcakes wrapped in black polka dot cupcake wrappers. 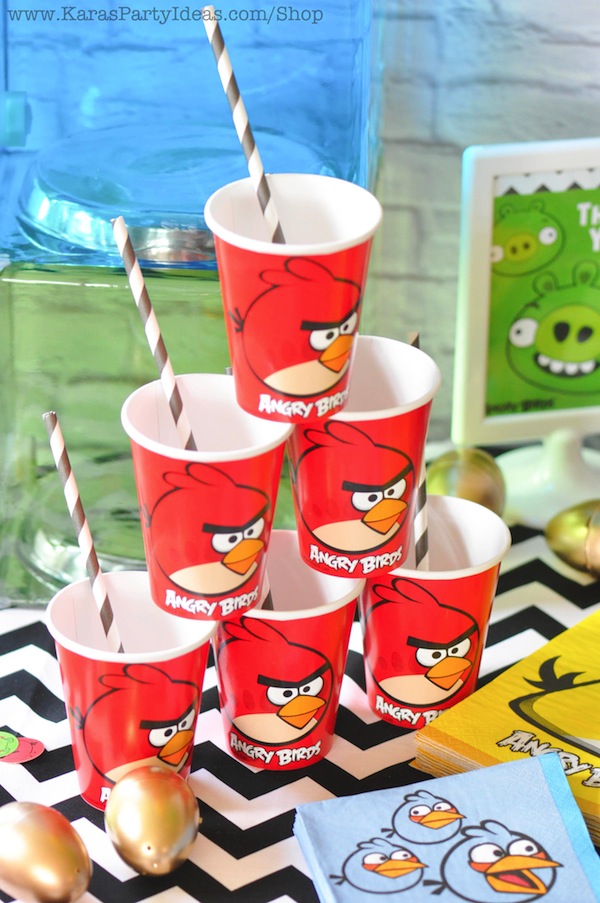 Cute Angry Birds paper cups from Kara’s Shop were stacked in front of the drink dispenser. Black & white striped paper straws were added to each cup. 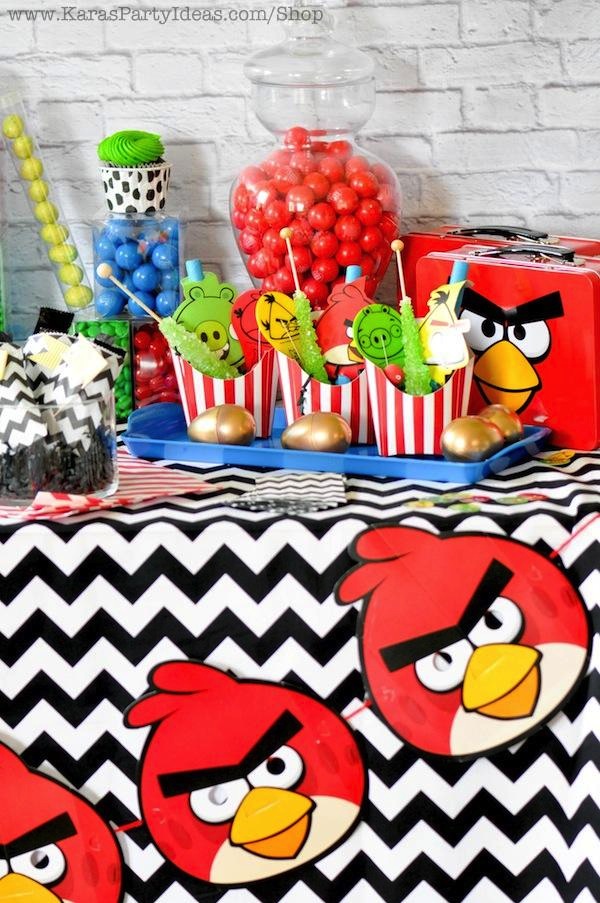 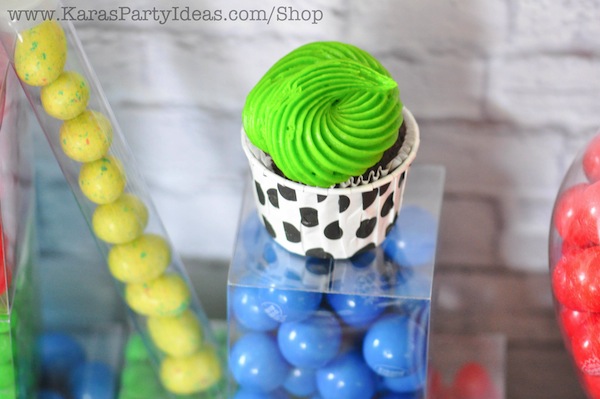 Mini chevron striped paper bags from the shop were filled with black buttermint cream candies. I stuck a yellow cupcake pick/flag through each bag for added charm. 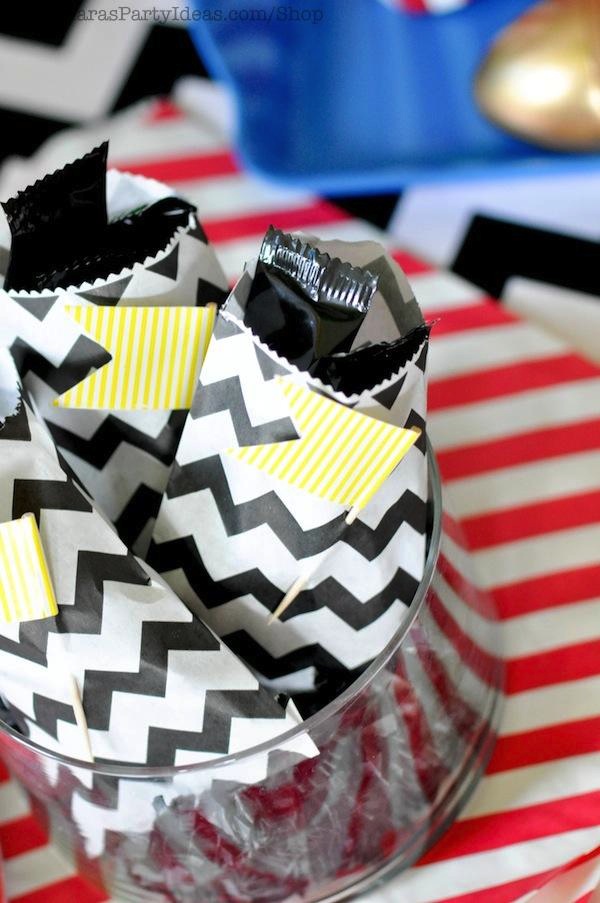 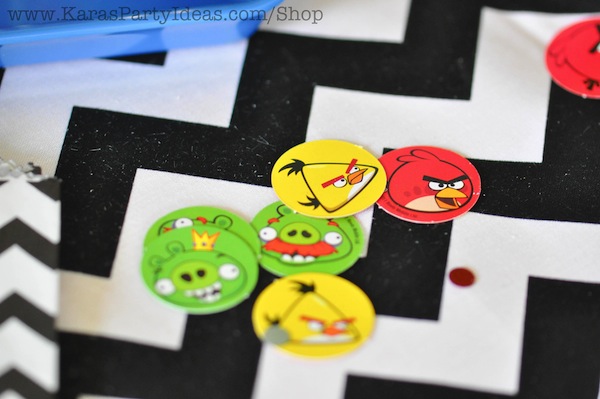 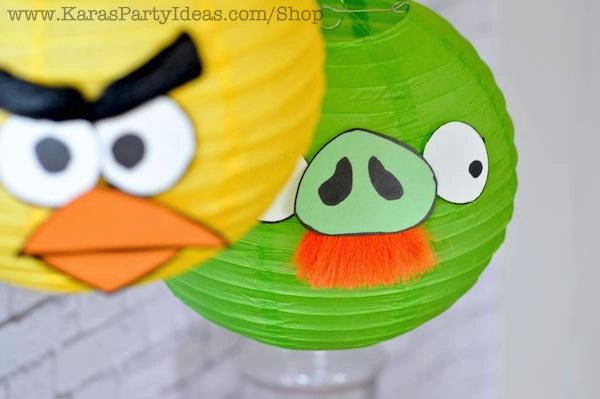 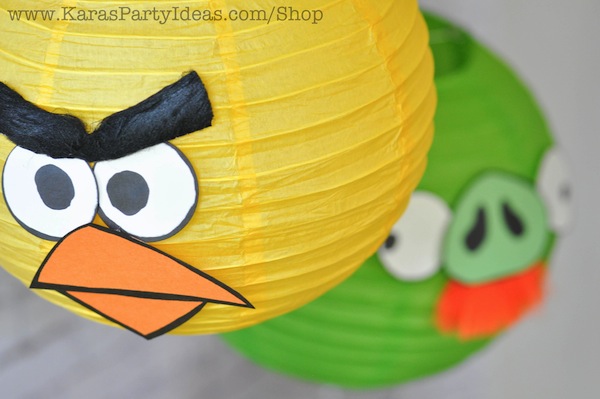 These Angry Birds party lanterns were simple to make and added so much to the party! 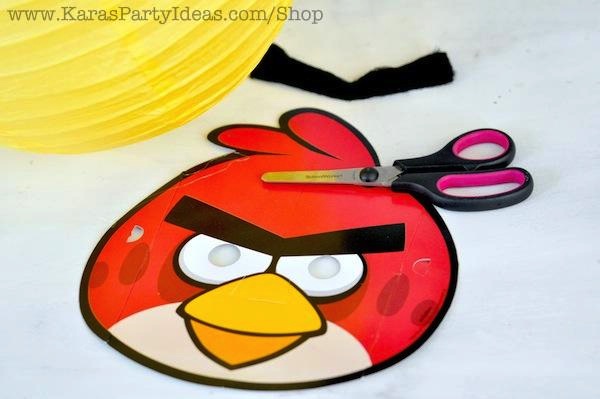 1. Simply cut out the eyes and beak from the Angry Birds mask… 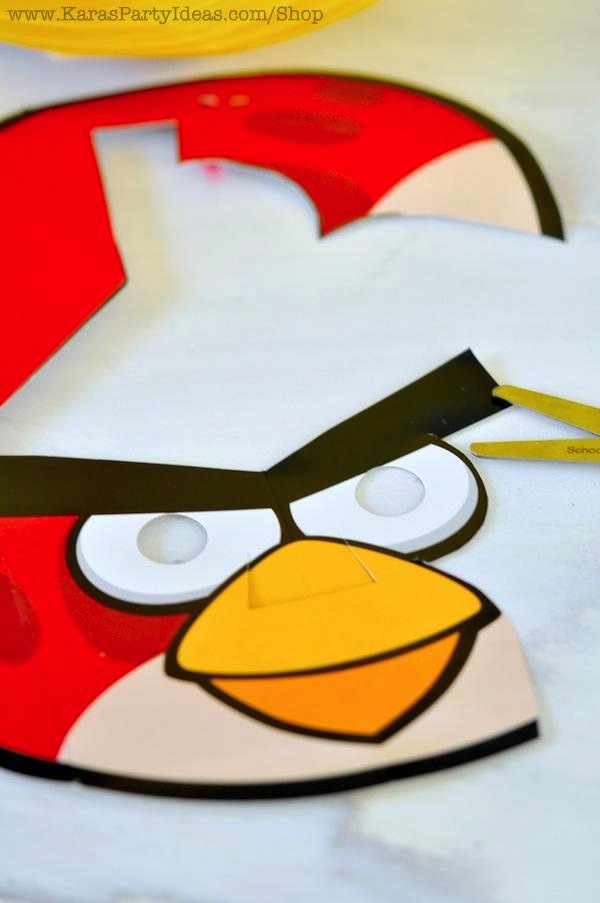 2. Adhere the eyes and beak to a Chinese Party Lantern.

3. Attach the angry bird eyebrows to add some dimension to the Angry Bird face… 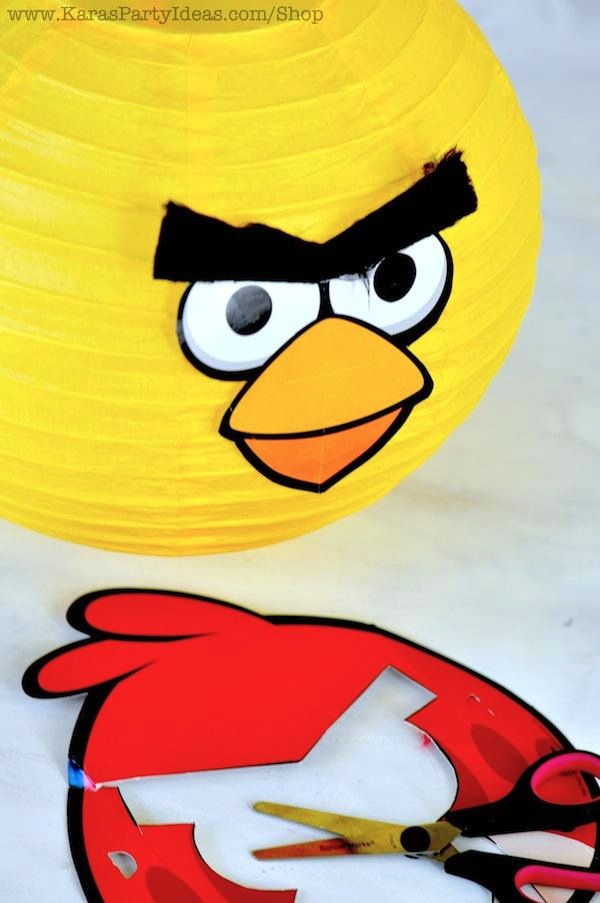 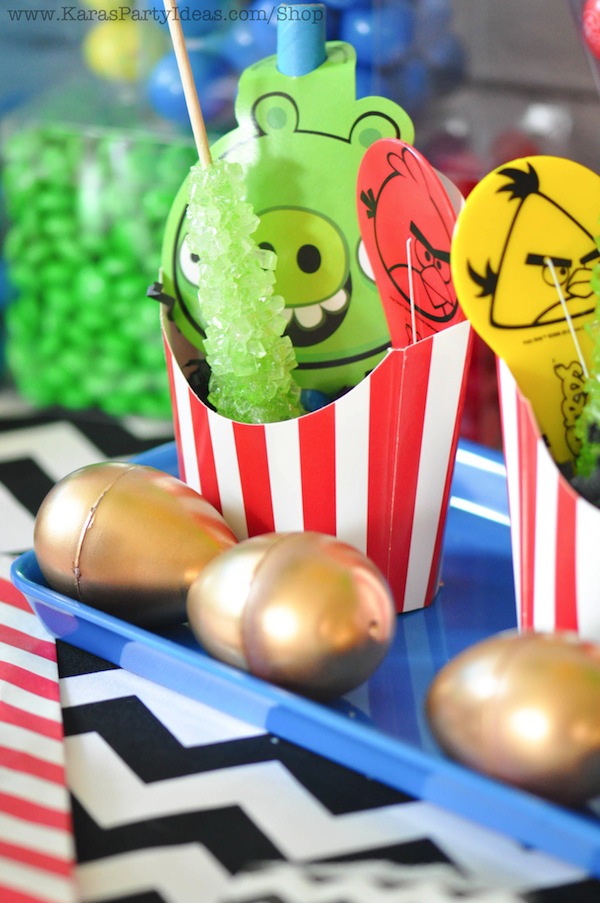 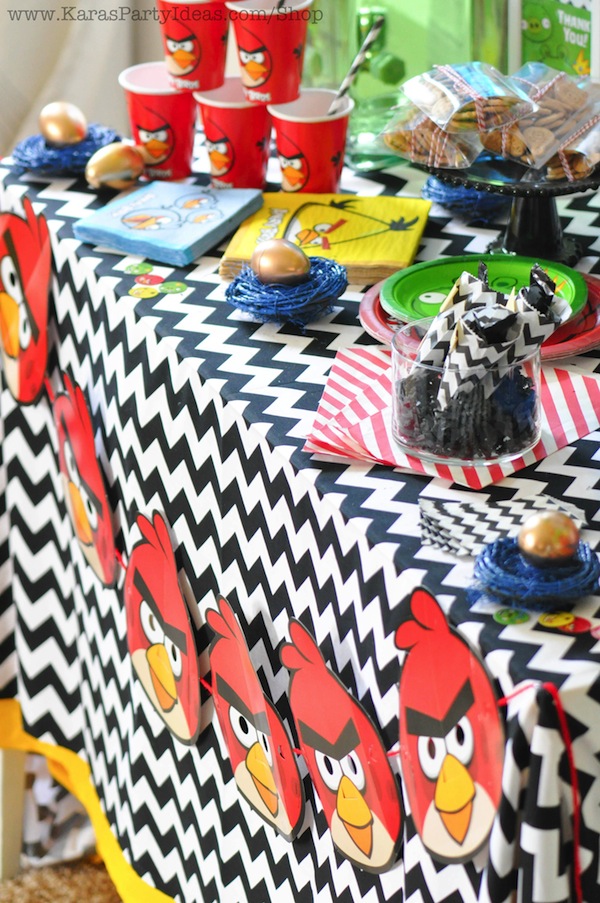 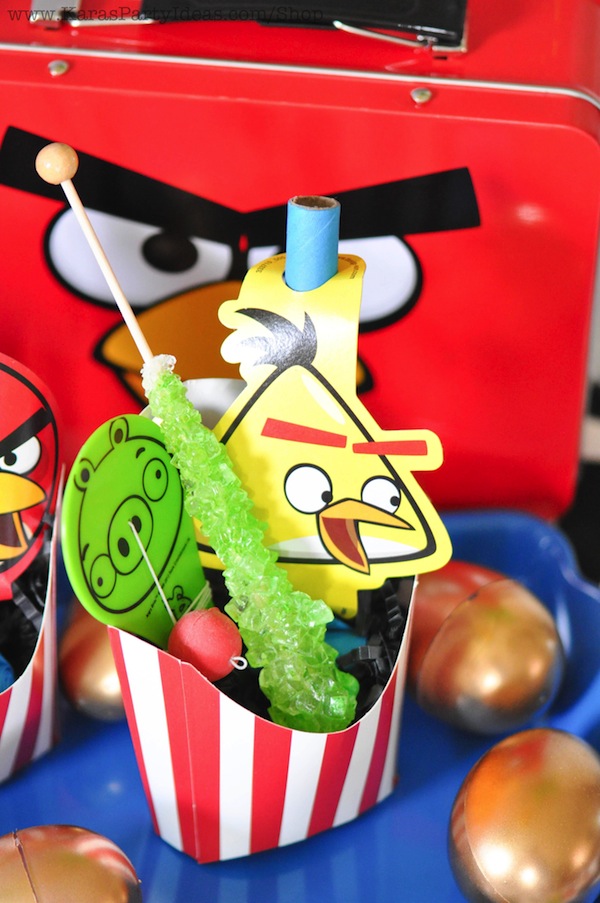 Like I mentioned above, I made the banner for the front of the table out of Angry Birds party masks

{strung them on some red twine}… 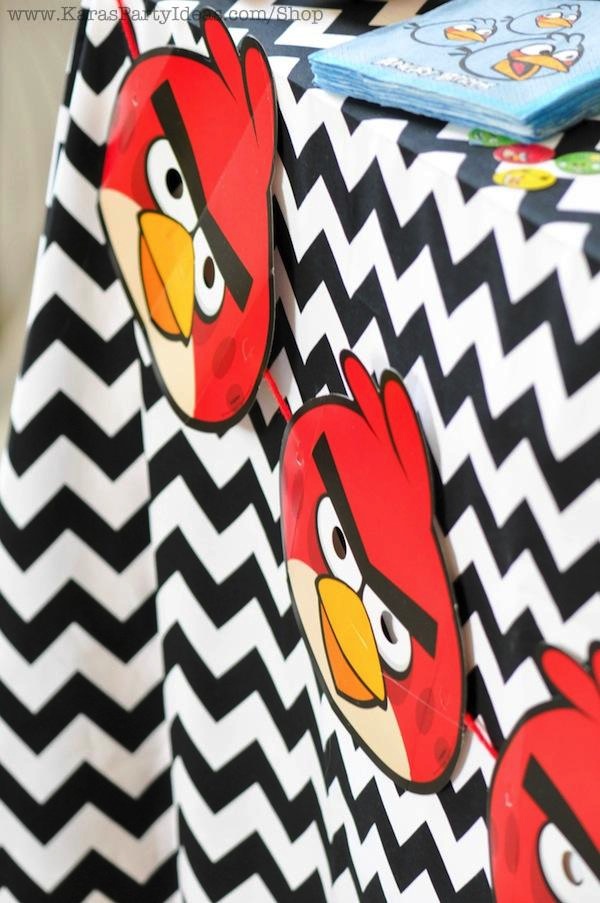 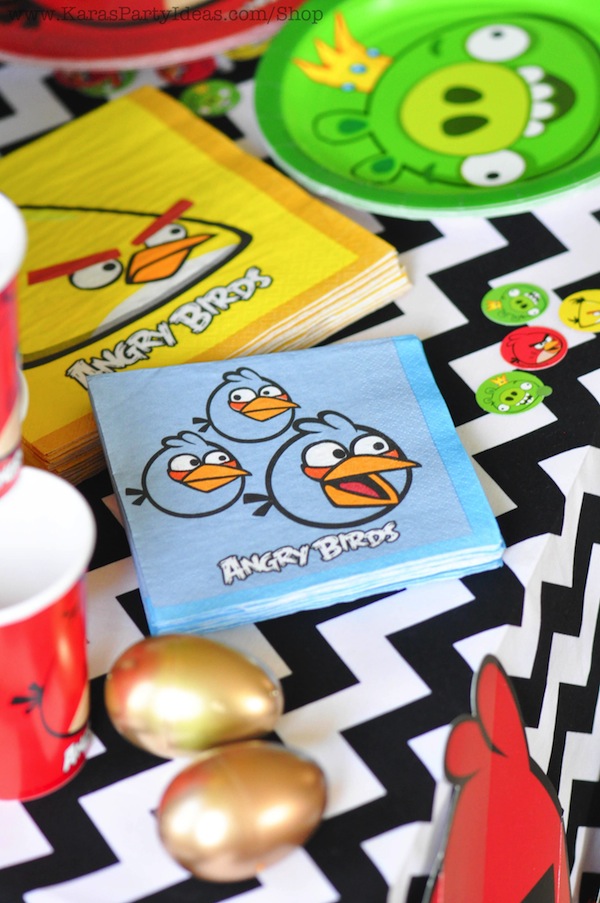 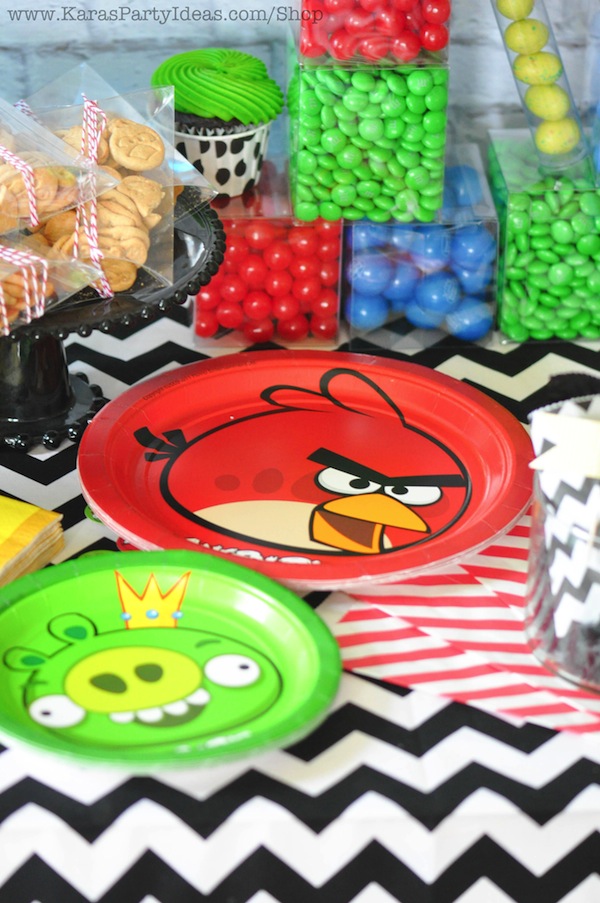 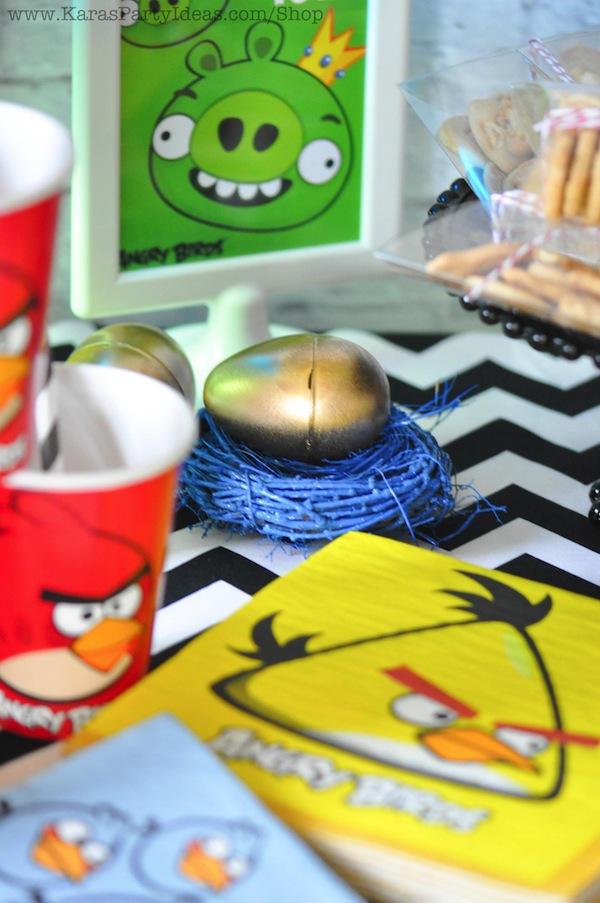 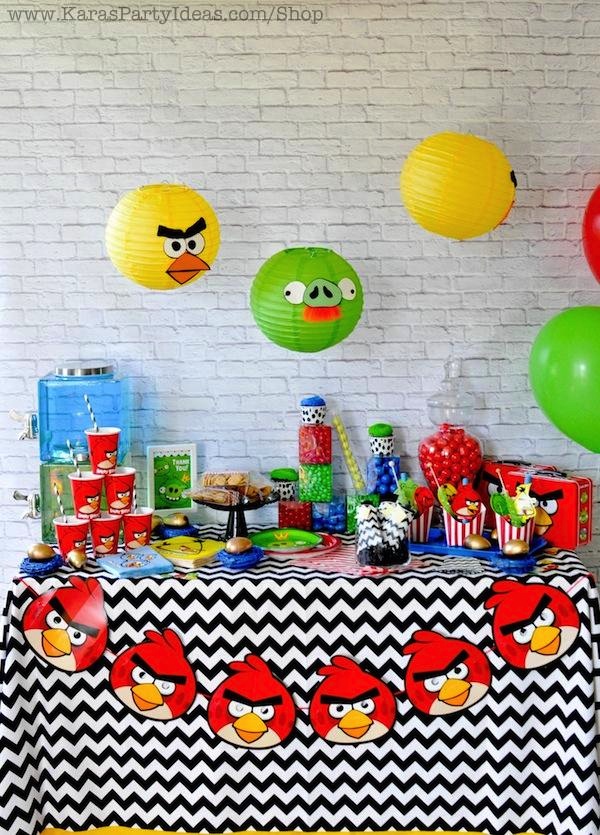 I filled clear pillow boxes  with Angry Bird cookies and tied red bakers twine around the outside of the boxes…. 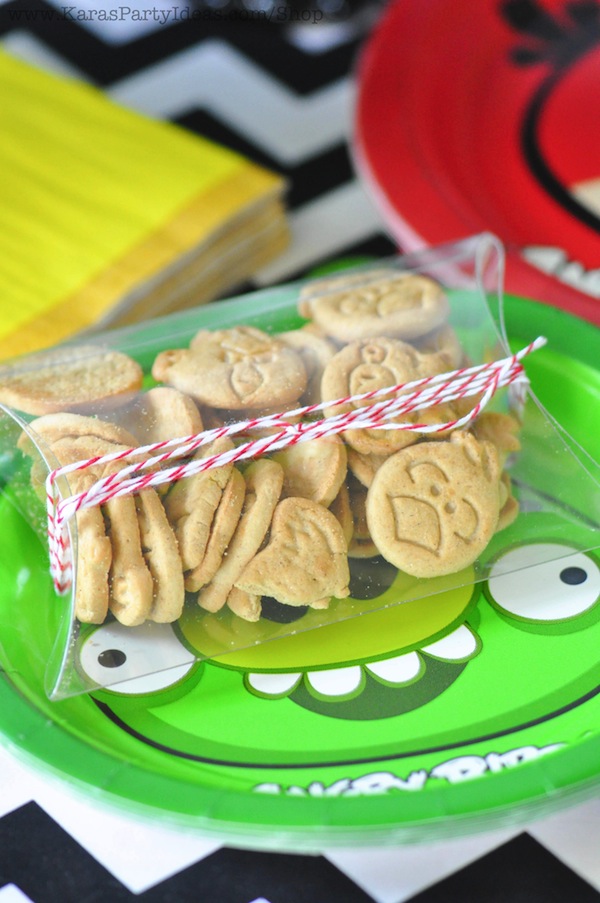 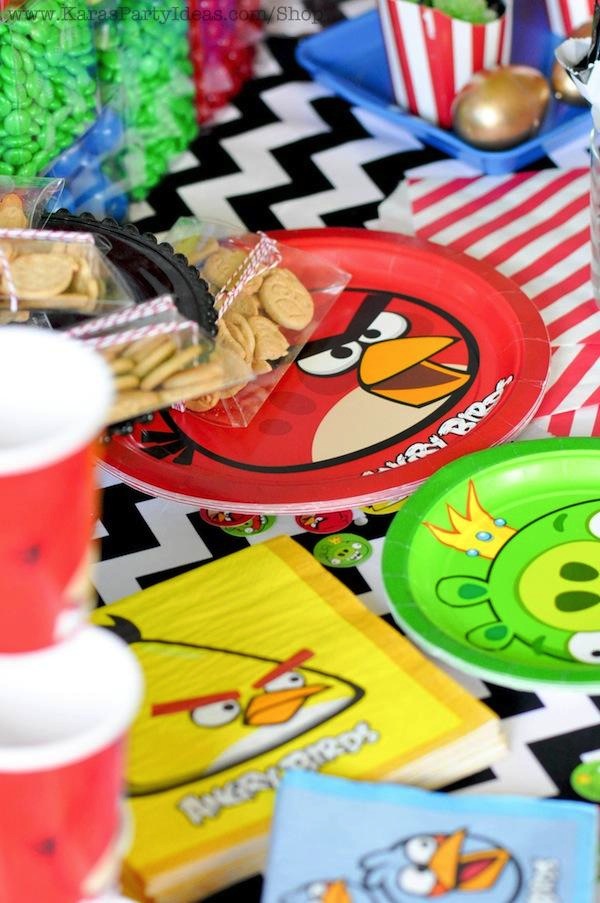