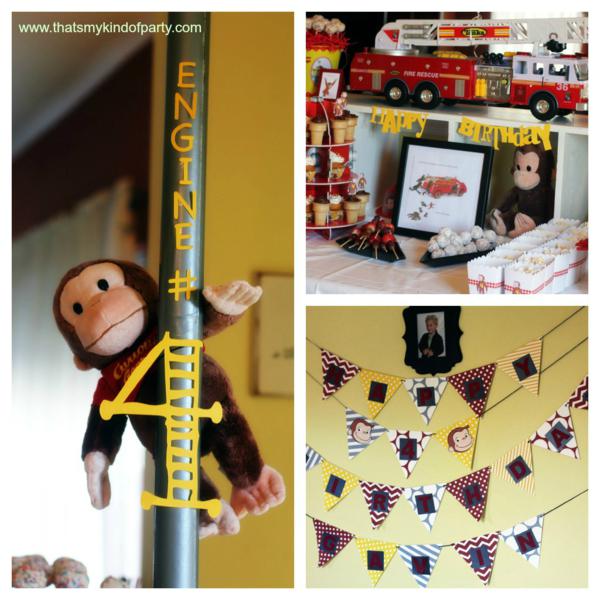 Who has a child who loves Curious George?! If you do, then this adorable CURIOUS GEORGE FOURTH BIRTHDAY PARTY submitted by Meredith Tomasulo of That’s My Kind of Party is for you! So many darling ideas here that you won’t want to miss!

Meredith said this about planning the party-

“My son turned 4, I can’t believe it – seems like just yesterday we were bringing the little guy home. He is all boy and loves his firetrucks but he also really loves to read – especially Curious George. The week after my daughter’s 2nd birthday (here) he told me he definitely wanted a ‘George’ party. It is all he talked about so I started planning. When we read Curious George and the Firefighters I knew I had to combine both ideas AND give every child the book as the favor.

DECOR: It wasn’t hard to combine the Curious George and the Firetruck theme. I printed pictures from the book and had them framed on the table. I laid a bookcase on its side and filled the shelves with bananas, Curious George stuffed animal and a fire hat. There was a fireman’s pole with George sliding down on the table. We also used lots of firetrucks around the room. The fireman hats were hung on a frame that the kids grabbed as they headed outside. As a tradition the front door was painted in the birthday theme- A big Curious George holding balloons.

FOOD AND SWEETS: The birthday boy had 2 requests-cupcakes in a icecream cone and pirate booty/popcorn in popcorn boxes. No problem. Twizzlers were fireman poles, banana runt candy and pretzels were monkey food and the kids loved the donut holes and the fruit skewers. I made my famous cake pops with rainbow sprinkles. The kids ate Chef pisghetti bagel bites and the adults had homemade baked ziti.

ACTIVITIES: The local Fire Co sent a Firetruck to our house! We called 4 Alarm Fire and all the kids ran outside. They got to climb inside the truck, sit in the chairs, try on the boots and hats and my son even got to sound the siren before they left. The faces on the kids when this truck pulled up was priceless!!

FAVORS: All kids received a firemans hat with a George sticker on the front, Curious George and the Firefighters book and a swirl lollipop.” 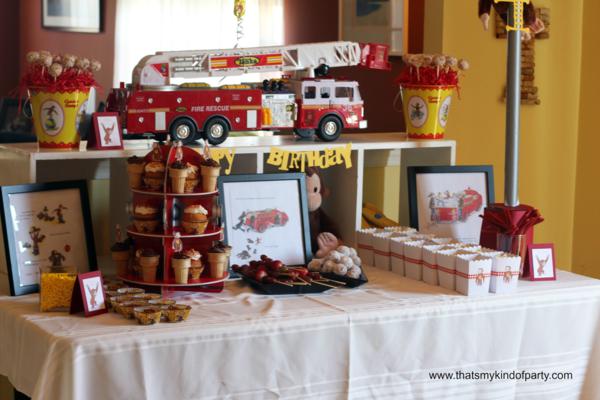 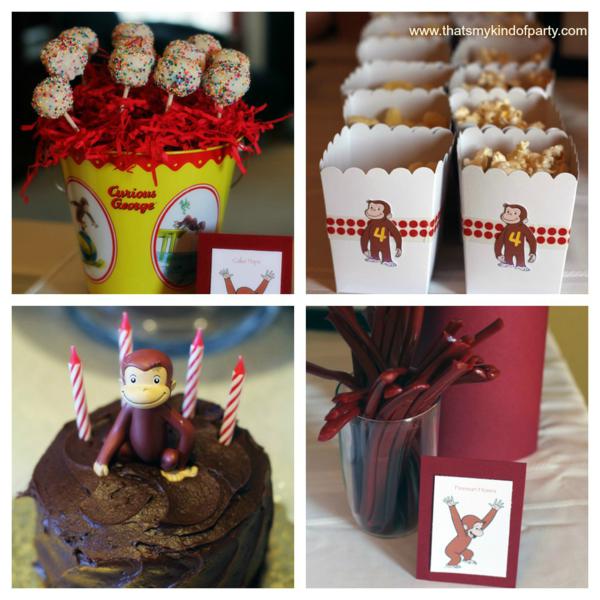 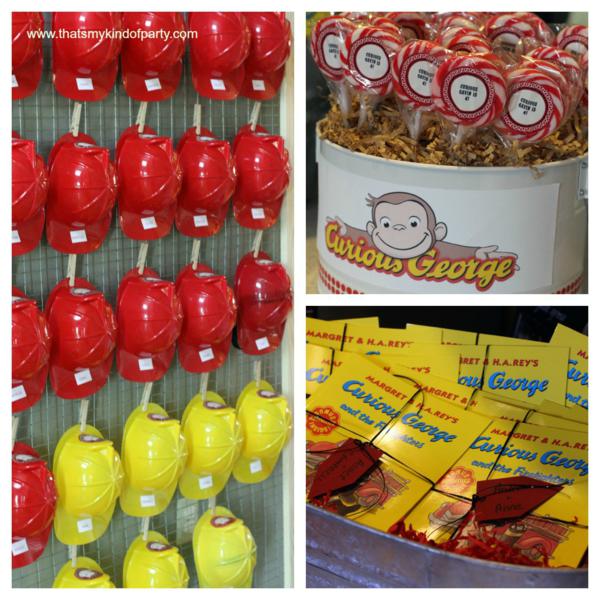 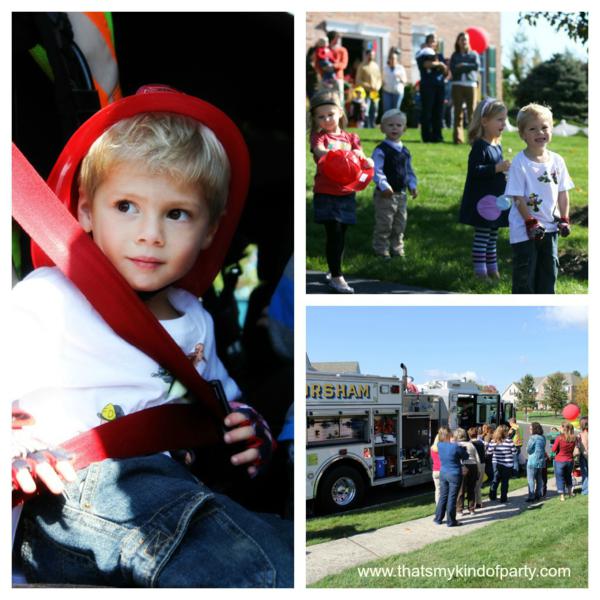 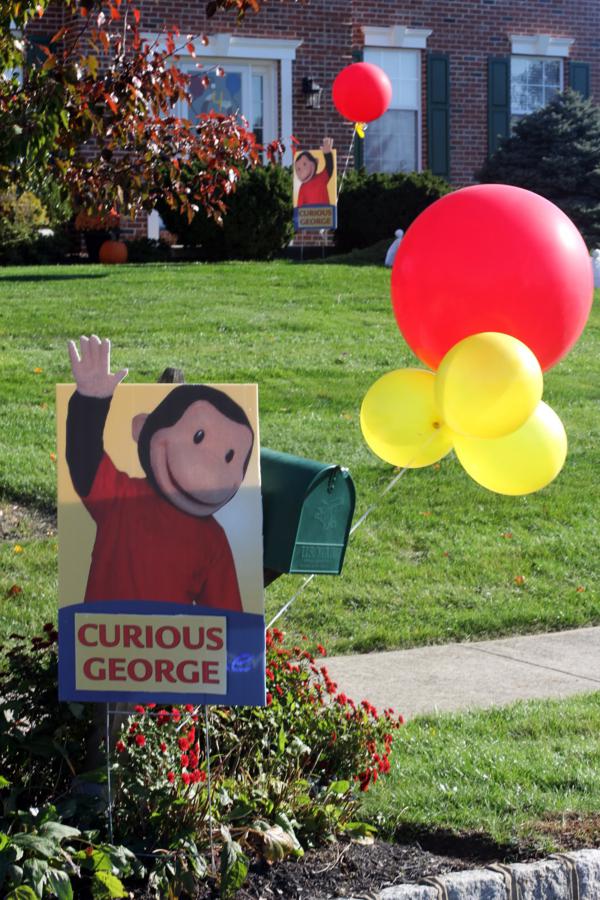 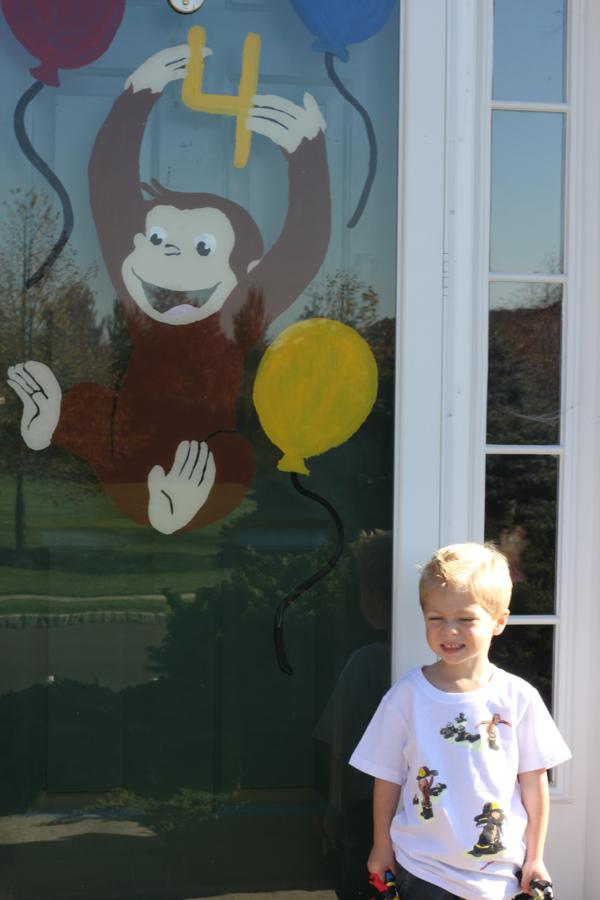