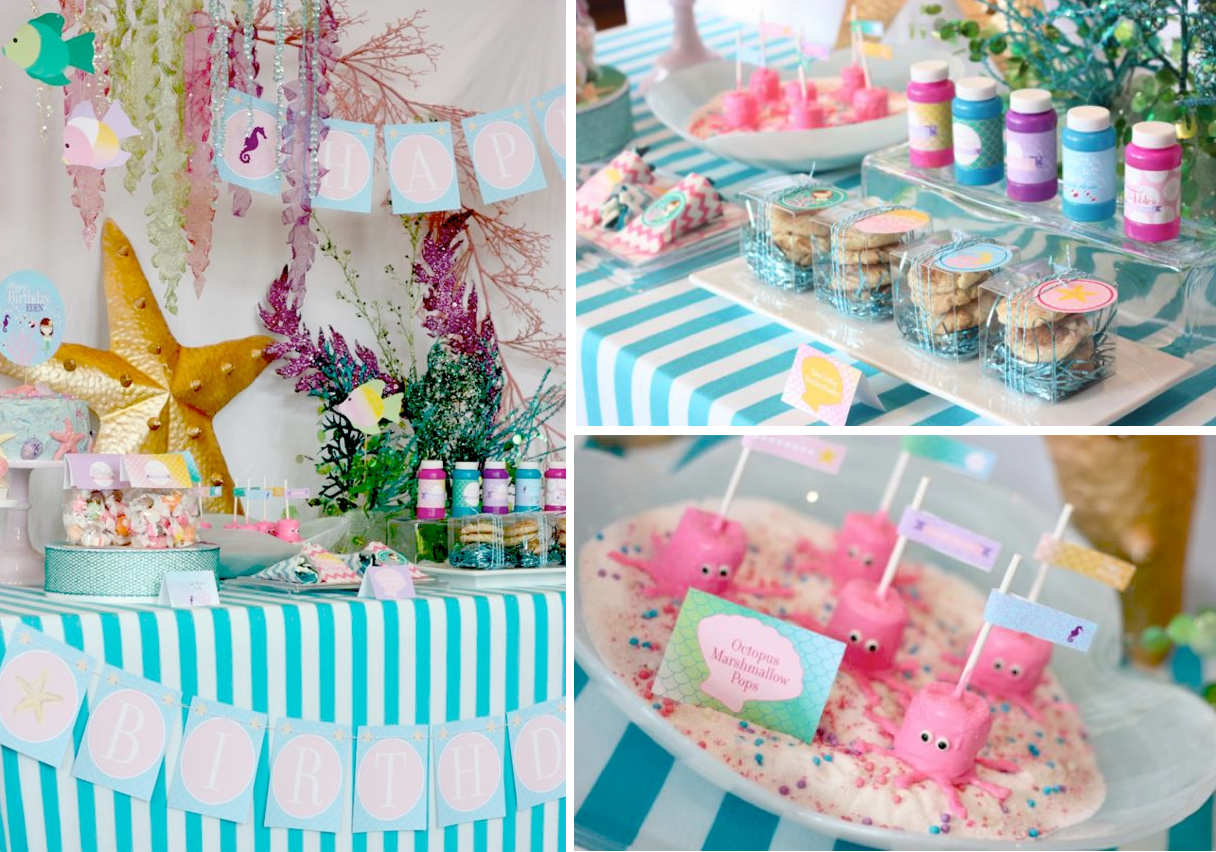 This darling WHIMSICAL MERMAID UNDER THE SEA BIRTHDAY PARTY was submitted by Debbie of Wants and Wishes!
Debbie said this about planning the party- “I know there are a lot of ideas for mermaid parties so I wanted to create something unique, fresh and modern yet still fun & bright for the little mermaids attending the party! I got my inspiration from Disney’s The Little Mermaid ‘Under the Sea’ song. I was also inspired by my niece, as she is obsessed with mermaids from any and every tv show. I wanted to create a dessert table that made the guests feel as though they were on the ocean floor living the life of a mermaid!
For the décor, there were colorful ‘seaweed’ strands and blue beads cascading down the walls, with a large starfish as the center point. I accented everything with more glittery ‘seaweed’ and other ocean plants, along with schools of fish. We also hung a printable ‘Happy Birthday’ banner that we designed. It’s so fun how it looks like the mini starfish are holding the banner up!
The desserts turned out really well and were extremely easy. I made marshmallow octopus pops which were sitting on a bed of white sugar with a little cinnamon mixed in to create a fresher ‘sand’ look. (I know a lot of people use brown sugar, but I wanted a lighter, more whimsical feeling). Mixed with the ‘sand’ were colorful chocolate non-perils. The mini cupcakes were also sprinkled with the white sugar and cinnamon mixture and topped with a colored chocolate seashell. We marbleized the chocolate so it wouldn’t be a solid pink or purple, to make the shells look more realistic. We used the same concept for the cake. We mixed in different shades of blue and applied the frosting in a swirl pattern like tussled ocean water. The cake was also topped with chocolate seashells and starfish. After marbleizing them, we dusted them with edible glitter to add a little extra sparkle.
No mermaid party would be complete without bubbles…. So we created bubble wrappers that are part of our printable collection.”
Party Styling: Wants and Wishes
Party Printables: Wants and Wishes Shop
Items used in this party available in Kara’s Party Ideas Shop:
Lollipop Sticks
Ribbon
Chevron Paper Bags
Baker’s Twine
Clear Favor Boxes
Salt Water Taffy
Clear Cellophane Bags 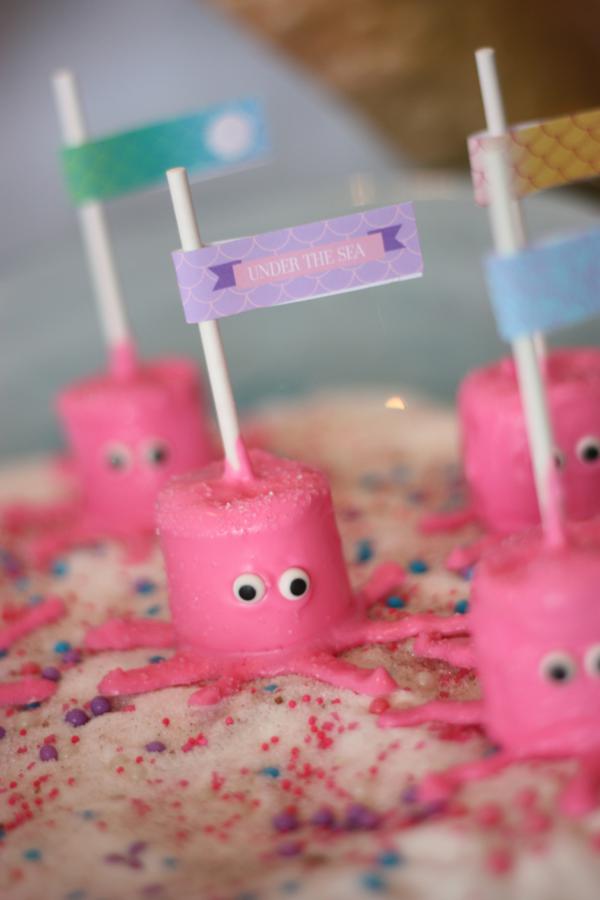 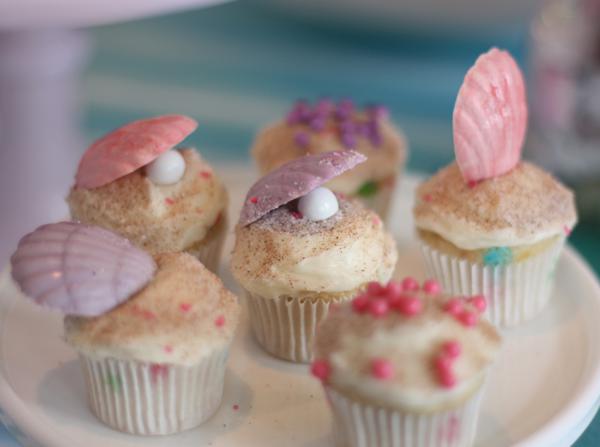 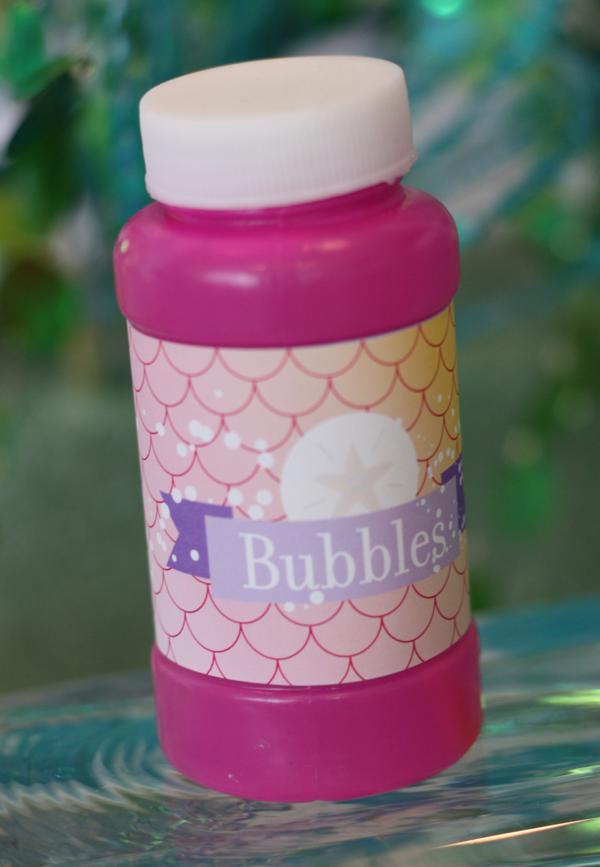 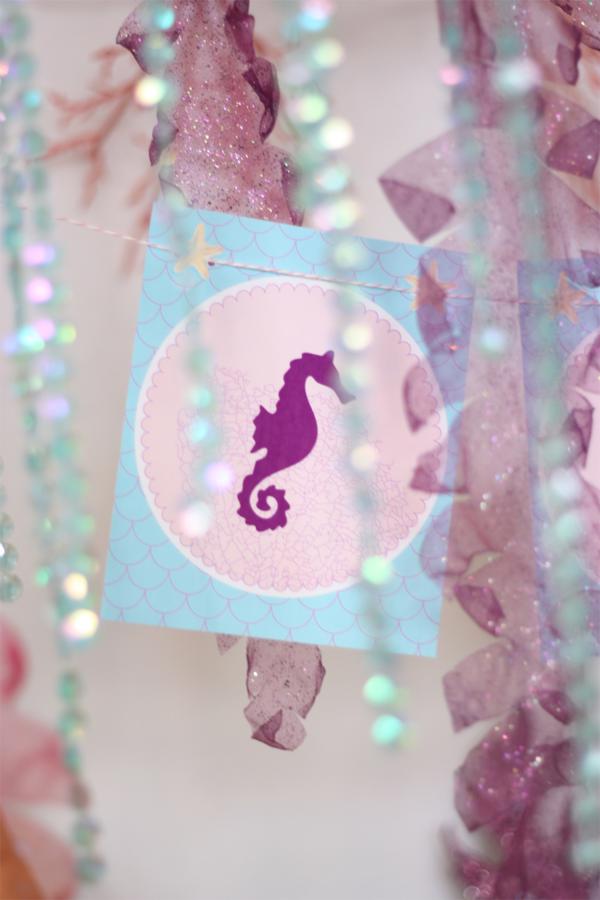 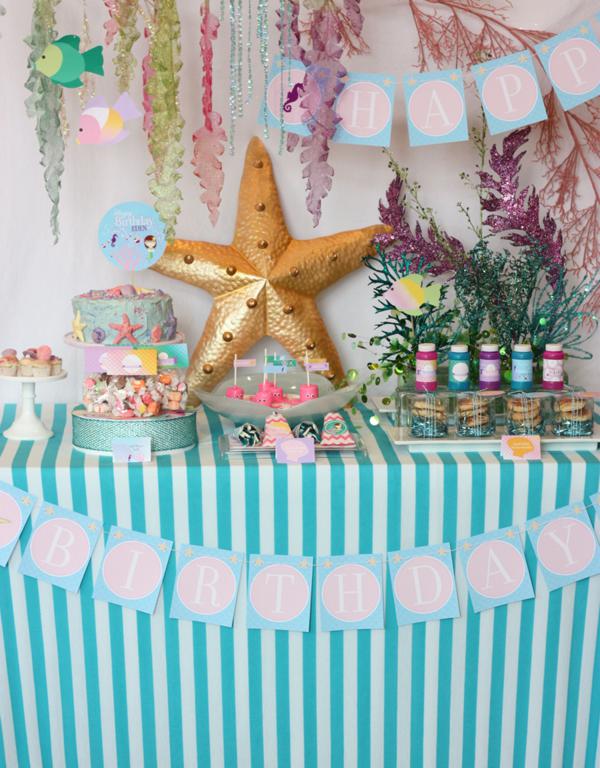 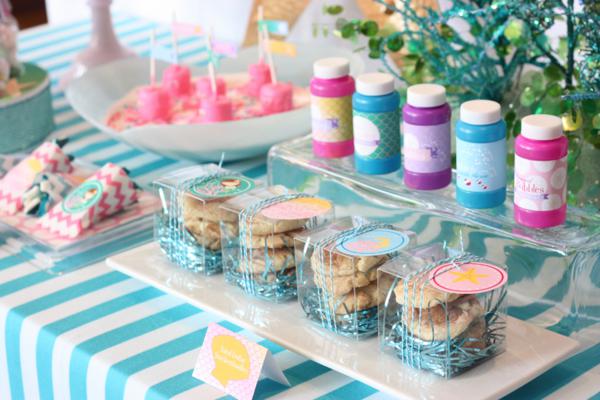 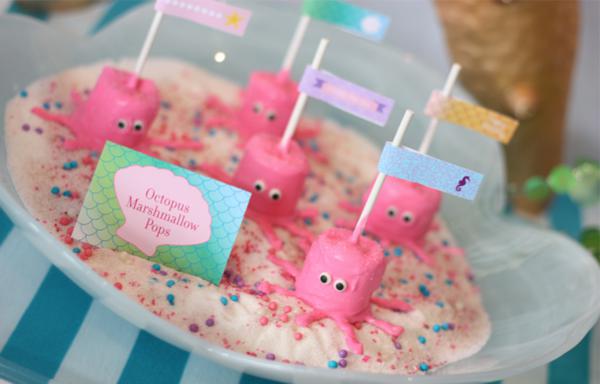 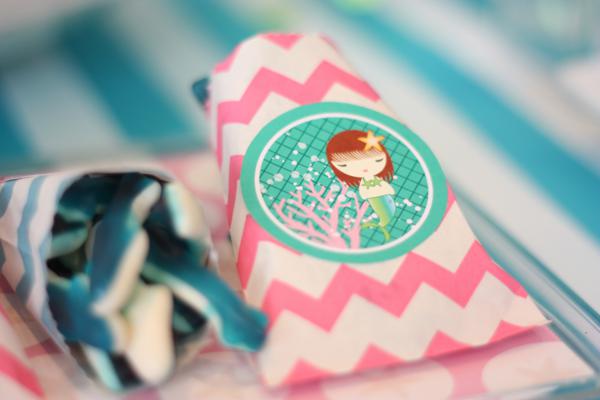 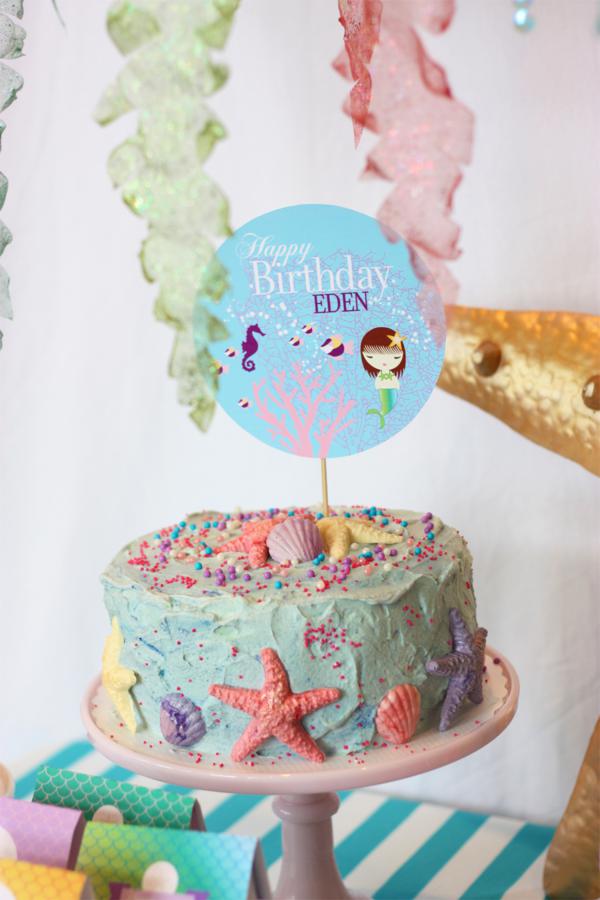 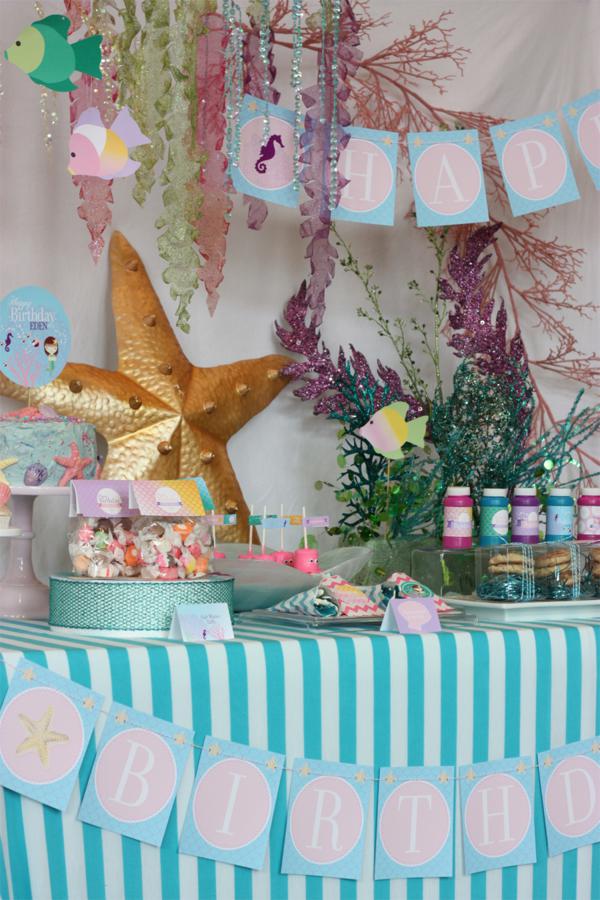 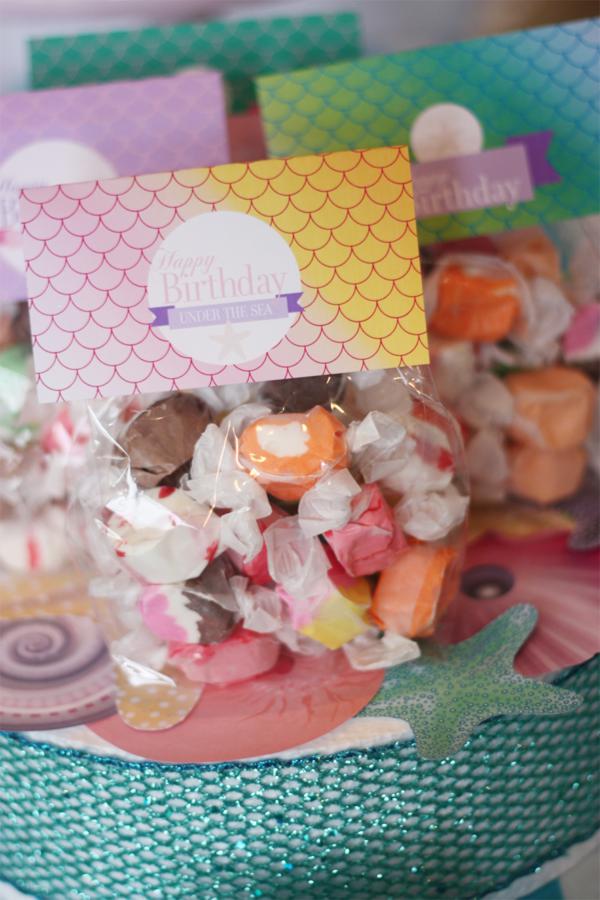 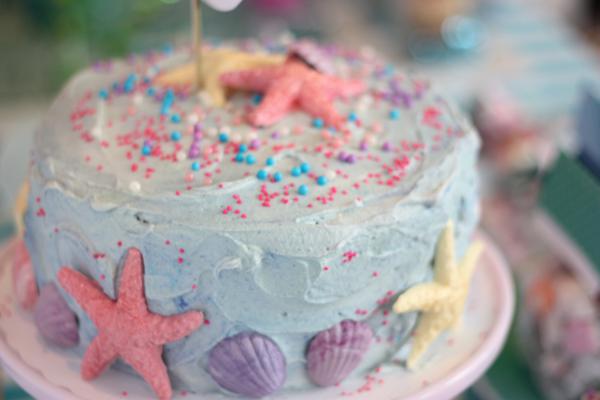 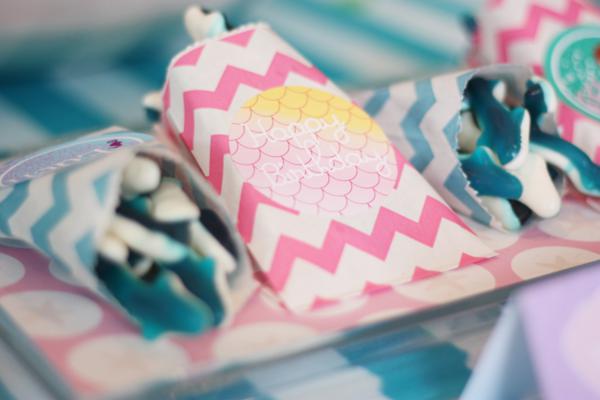