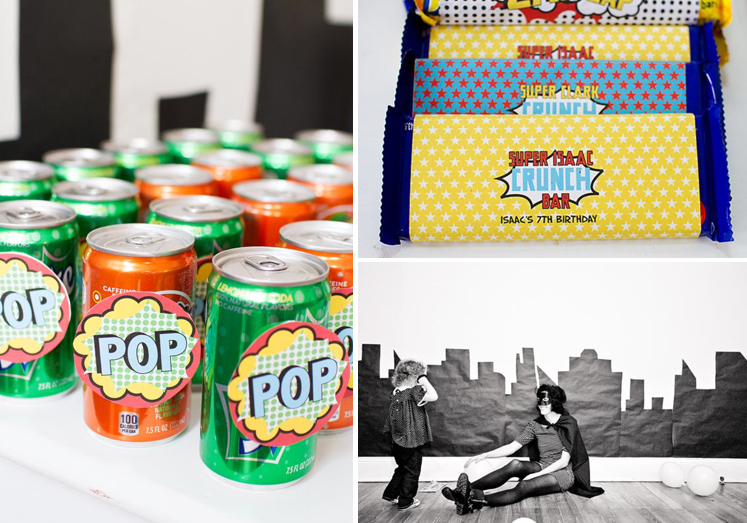 This SUPERHERO BIRTHDAY PARTY was submitted by Justine Worthington of Worthington Weddings and Events. I love how so much of this party is DIY but you would never know to look at it! It just shows how far guest participation, the right venue, and good photography can go to create an amazing and memorable party!
Here are some of my favorite elements of this superhero party:
The printable scraps mod-podged onto the wooden fork handles
The ‘POP’ labels stuck to the side of pop cans… genius!
The printable snack cones
The super-kids lineup, complete with masks and capes
The Duct Tape dumbbells
and MORE! 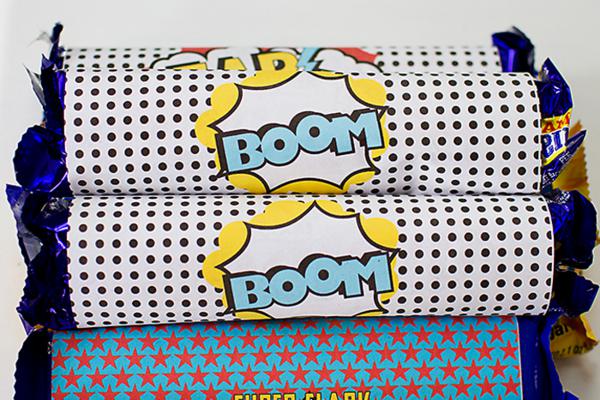 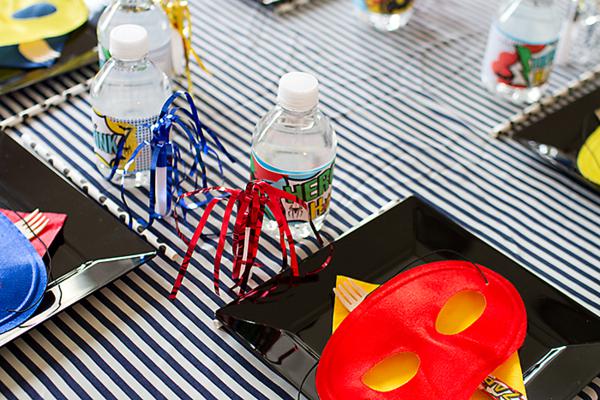 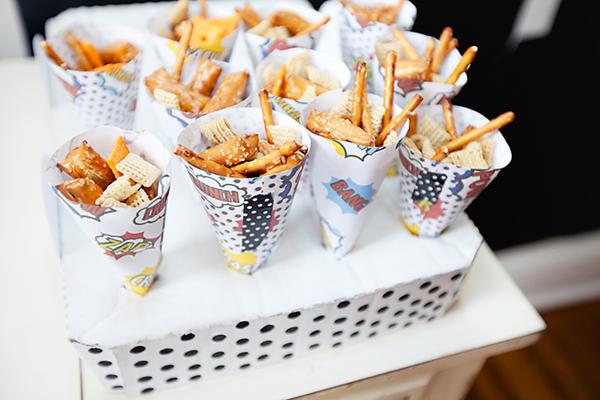 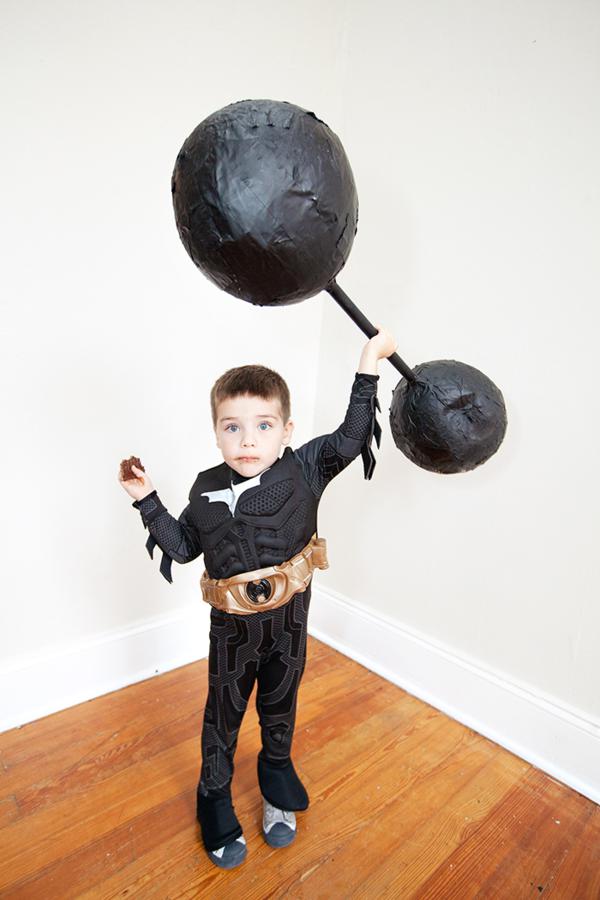 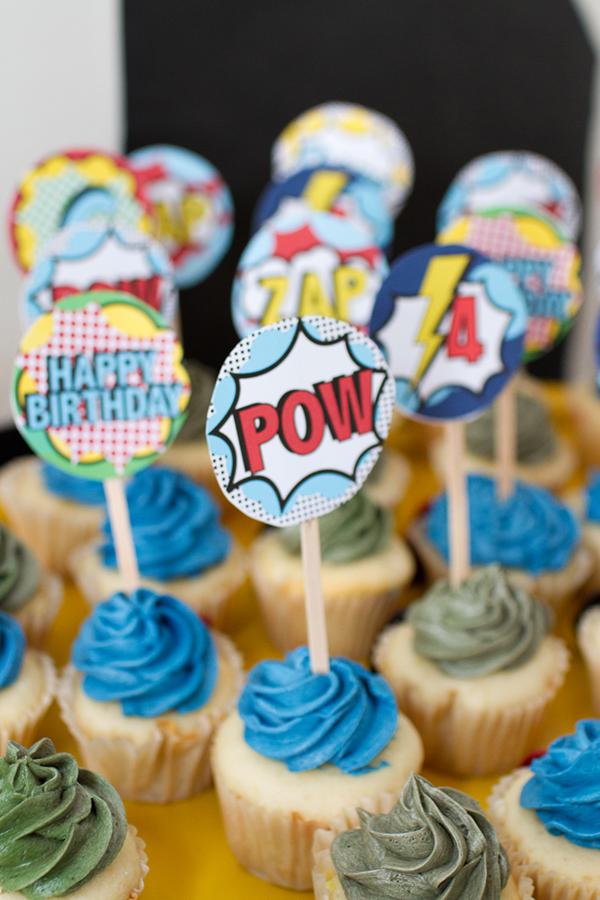 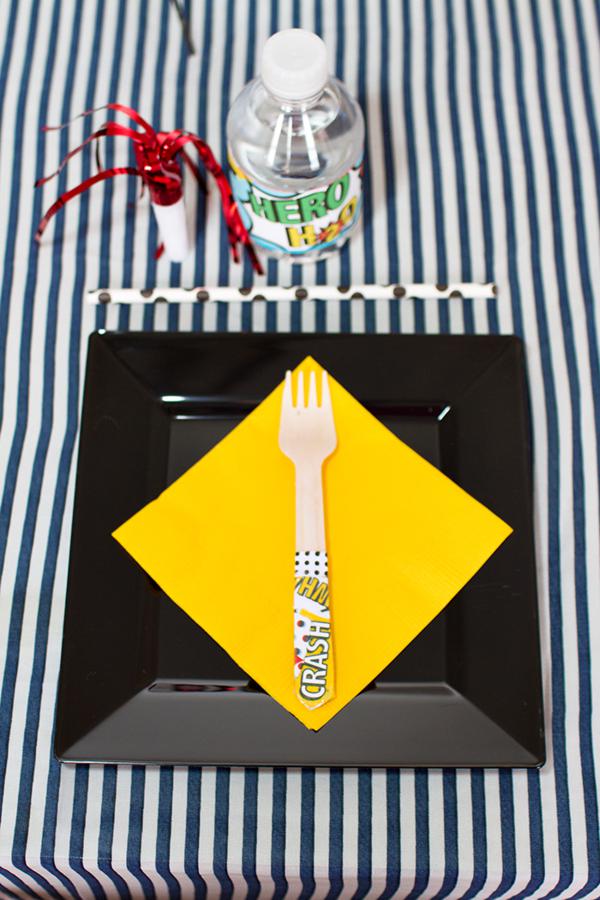 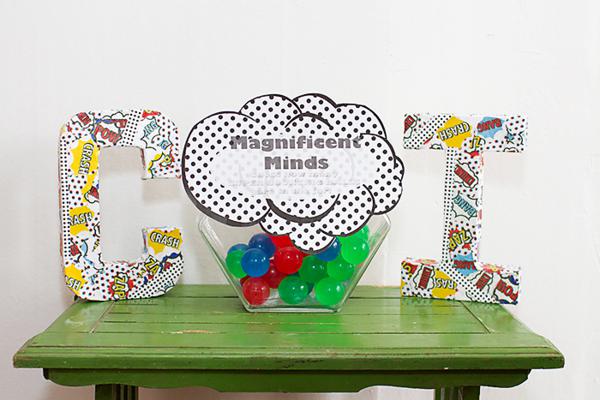 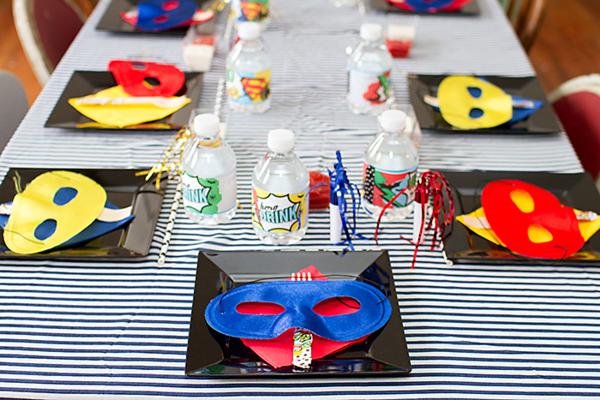 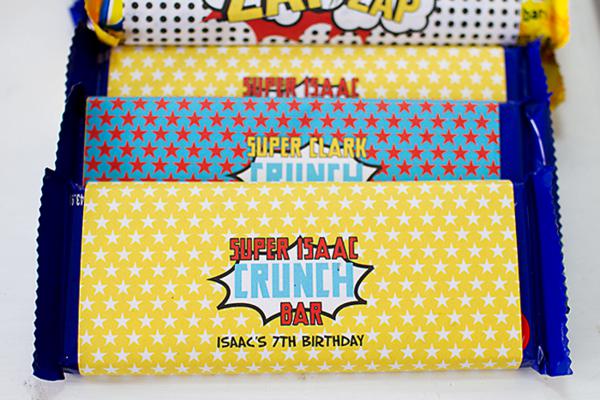 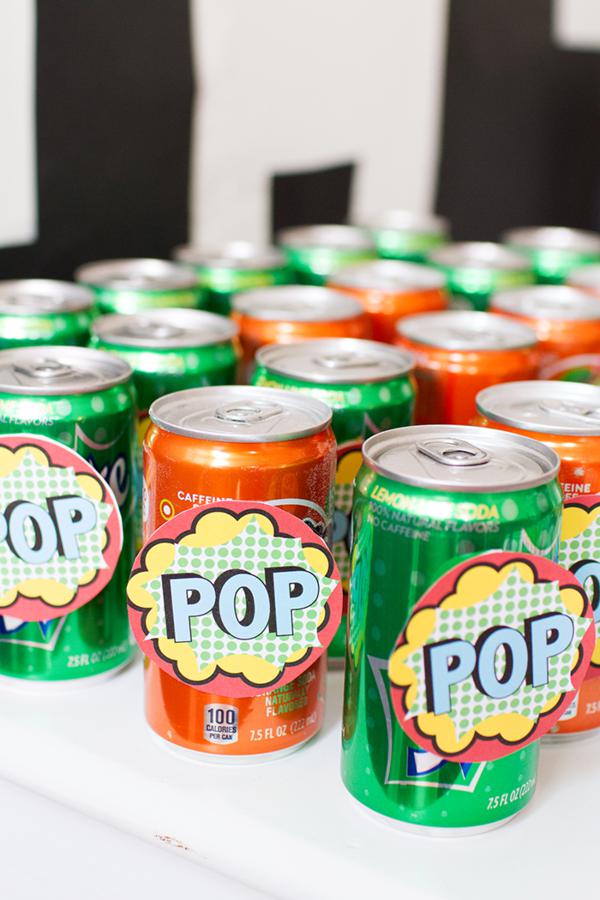 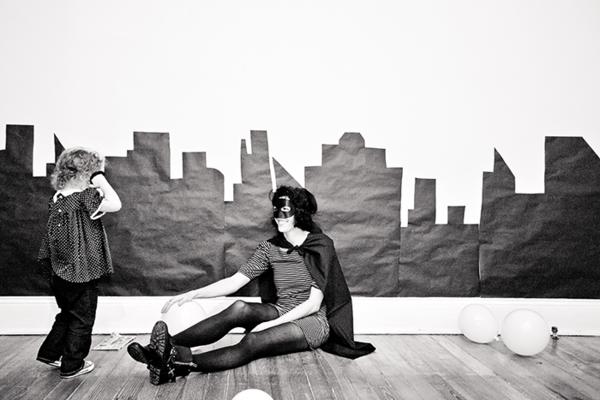 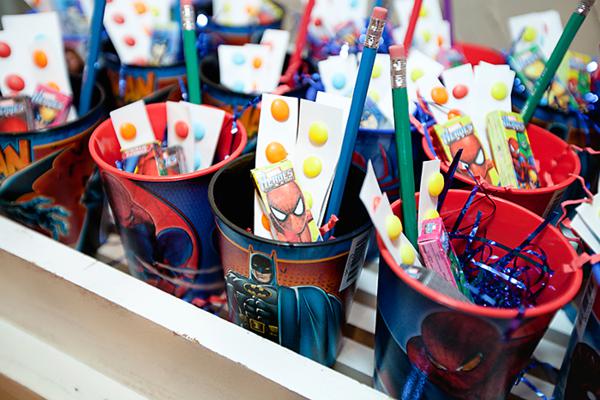 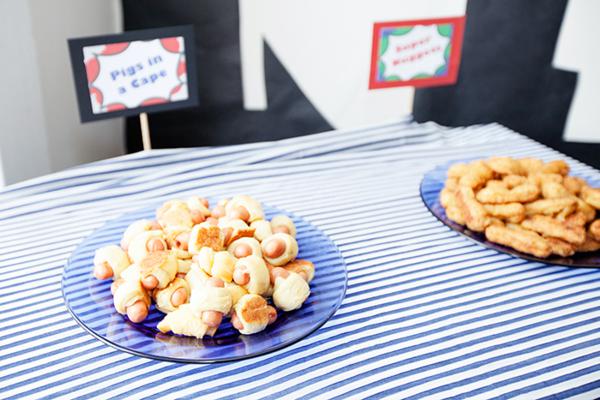 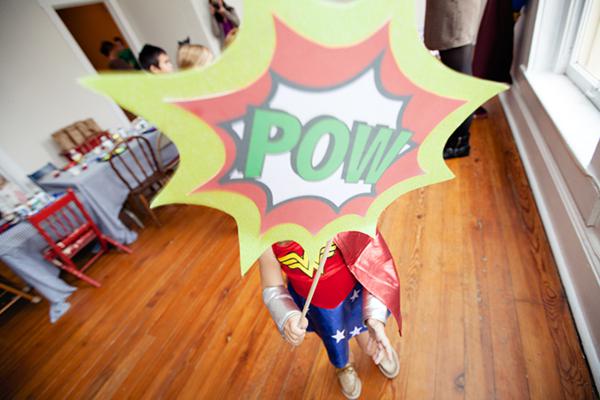 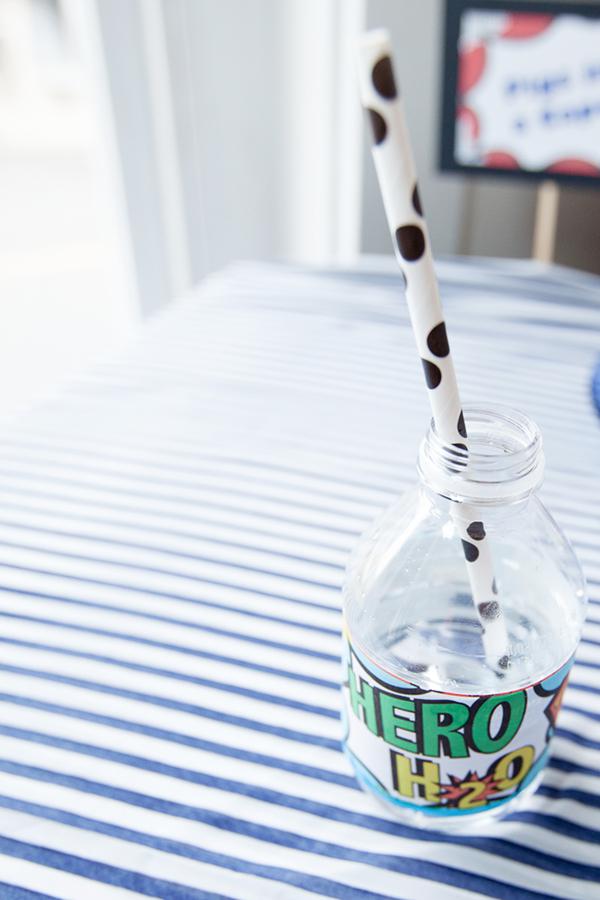 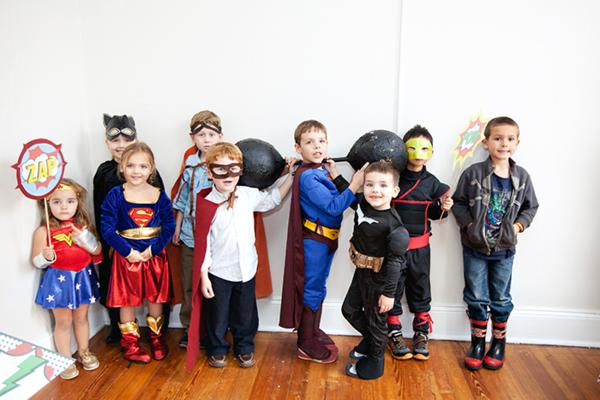 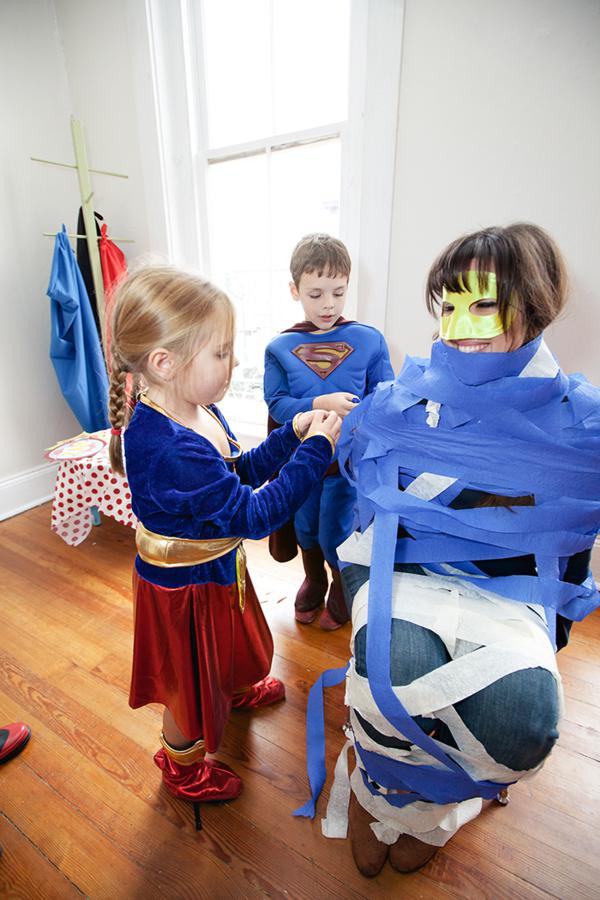 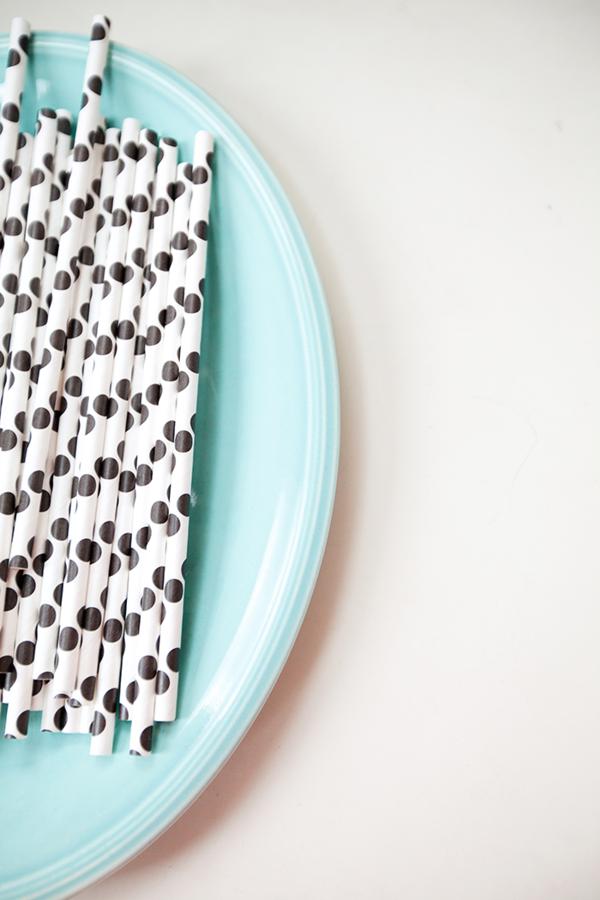 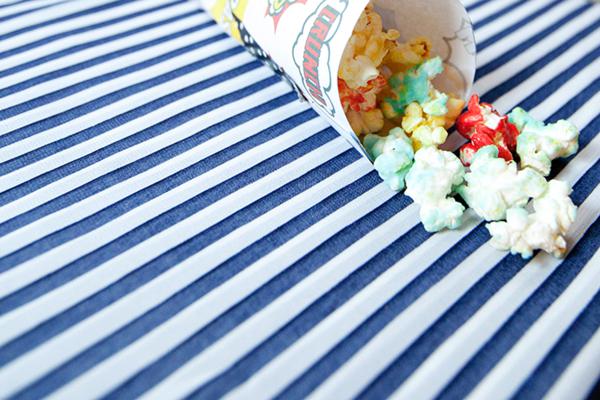 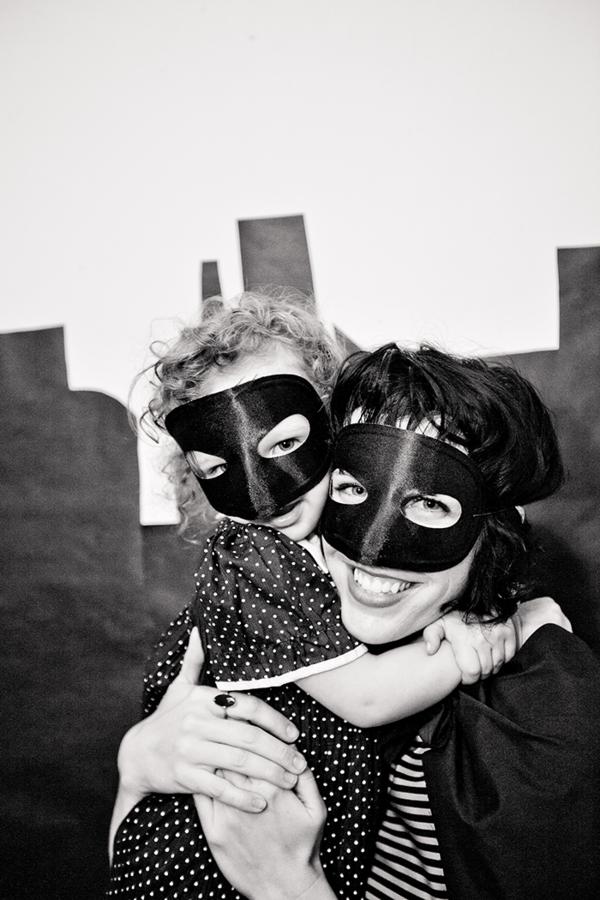 This is what Justine said about planning the party– “My work as a wedding coordinator typically includes roses and lace, this event on the other hand was all about the ZAP! and POW! In the event planning industry, I get to meet oodles of talented colleagues and this Super Hero Birthday party happened to be in honor of photographer Molly Dues’ two sons, Clark(4) and Issac(7). Molly was a blast to work for, she’s bubbly and full of fun. She wanted the party to be held in the Molly Dues Photography Studio, which, for a planner is a dream space for putting on a party.

On the menu we had “pigs in a cape” (corn dogs), “super nuggets” (chicken nuggets), “hero mix” (snack mix), and “POPcorn” (uhh…popcorn). For dessert, the kids would enjoy personalized hero cupcakes. Molly baked the cupcakes herself and even added little fondant capes to some! Each little hero was asked to come to the party in their special heroic get-up and masks were awaiting them at their seats. In the end, each guest would be given their mask to take home and a hero cup full of treasures especially made for those with super powers.

For entertainment, I researched and designed a few special little games. To get the party rolling we played ‘Pass the Kryptonite’. The tiny heroes all sat in a circle and while music played we passed ‘kryptonite’ (green glow sticks bundled together!). When the music stopped, the guest with the glow sticks was out (since kryptonite is bad for super powers, you know!) But there were no worries for these tykes, ‘getting out’ simply meant that it was time for them to jump up and grab a plate of munchies and find their seat at the table so they could rejuvenate their powers.

I also had a few other smaller games set out for the kids to enjoy and to exercise their super powers. The first was designed for the kids to guess what was in a brown paper bag by only using their super sense of touch. Some of the contents in the paper bags included matchbox cars, rice, and deflated balloons! The second challenge for the little heroes was to use their super eyesight and brain power to guess how many bouncing balls had been placed in a glass jar.

And finally, our last game included one that would let the kids use all of their super speed and might! They had to capture some villains of their own. Three very heroic parents stepped up to play the role of our villains and with that, the game was on. The kids were split into three teams and each team was given a color of crepe paper streamers. The first team to ‘tie up’ their villain with crepe paper would be the first to dive into the birthday cupcakes! Talk about motivation!

We maintained a very low and reasonable budget on the birthday party. I created many of the party props from scratch including the dumbbells, paper snack holders and the mod-podge letters. I recycled scraps from the supplies I bought and kept creating! For instance, I mod-podged the handle of the forks with leftover pintables and used items from around the office to fashion the guessing games. Kids’ parties are so fun that they are easily one of my favorite projects to tackle and enjoy.”