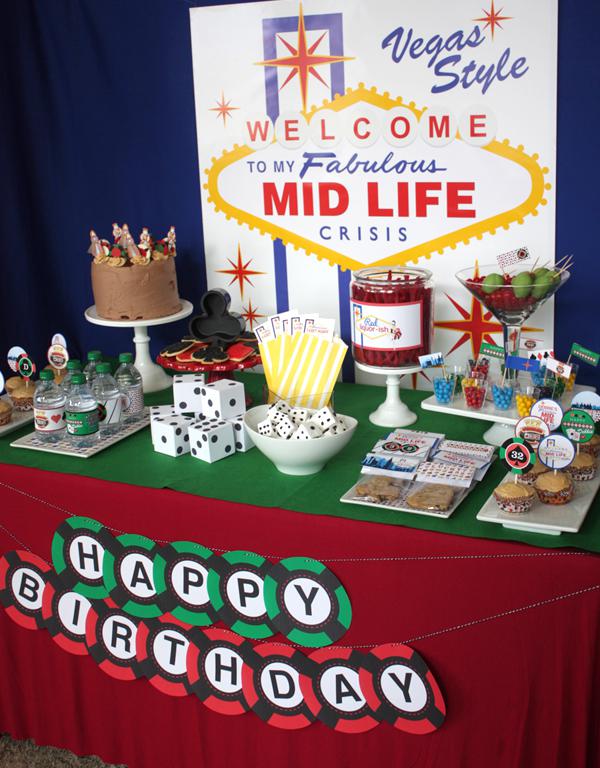 This super creative LAS VEGAS THEMED BIRTHDAY PARTY was submitted by Debbie of Wants and Wishes. This party looks like it was so much fun and has so many creative Vegas-centered ideas. Not only is it a great theme for a birthday party but it would also be fun for a girls’ night out, a bachelorette party, or an over-the-hill party!
There are so many fun ideas here! A few of my favorite elements of this Las Vegas themed party are:
The martini olive cake pops
The dice patterned favor boxes
The cookies shaped like different playing card suits
and MORE!

This is what Debbie said about planning the party- “Welcome to my fabulous midlife crisis birthday party…. Vegas Style. A few close friends and I joke that we are going through a pre midlife crisis, so when my birthday come around this year I thought it would be fun to have a midlife crisis party and also incorporate Vegas. I absolutely LOVE how it turned out and  everyone had a great gambling and munching at the “Lost Ages” buffet. The party’s saying was “What happens at Debbie’s party- stays at Debbie’s birthday party”.

For the atmosphere I wanted it to fee like a hotel & casino…. the “Lost Ages” Hotel and Casino. I was playing off of Lost Wages, as that is what some people call Vegas, but wanted to stick with the Ages/ Midlife crisis theme still. I set up tables for game playing and I wanted them to look like real gambling tables so they had green felt on the top and red skirting. This also matched the dessert table.
The dessert bar had a large backdrop poster of the famous Vegas Sign…. Welcome to my fabulous midlife crisis. We has so many fun sweets and treats. I made Sprinkles Bakes Peanut Butter Cup Chocolate Cake Cheesecake! It was so incredibly delicious! We decorated it with king and queen toppers and chocolate poker chips that I homemade. We also had sugar cookies and chocolate chip cookies in the shapes of all four playing card suits. The chocolate chip cookies were packaged in favor bags and we made ice cream sandwiches out of them later on in the party. There were also Elvis cupcakes (which have banana and peanut butter frosting with bacon bits in banana cupcake batter), homemade marshmallow “dice”, red Liquor-ish, little shot glasses of Chicklets (they looked like bingo balls) and my favorite dessert… olive cake pops. I took an over-sized martini glass filled with red candy, then displayed the “olive” cake pops in there! It was the hit of the night for sure! We had dice patterned favor boxes for the guests to fill up with treats and take home.
For favors, I made little note pads like you would find in a hotel room that said ‘Lost Ages, Hotel and Casino’ at the top and ‘What happens at Debbie’s birthday- stays at Debbie’s birthday’ at the bottom. These were also placed at every game table and we used them to keep score for some of the games.
The buffet had a vegetable and fruit platter, chips and my favorite olive dip, rice, squash and zucchini, sweet pepper sliced chicken and sliced steak and rolls.”
Party planning and styling: Wants and Wishes
Party printables: Wants and Wishes
Peanut Butter Cup Chocolate Cake Cheesecake recipe: Sprinkles Bakes
Items used in this party available in Kara’s Party Ideas Shop:
Striped Paper Favor Bags
Clear Cellophane Bags
Cupcake Liners
Lollipop / Treat Sticks 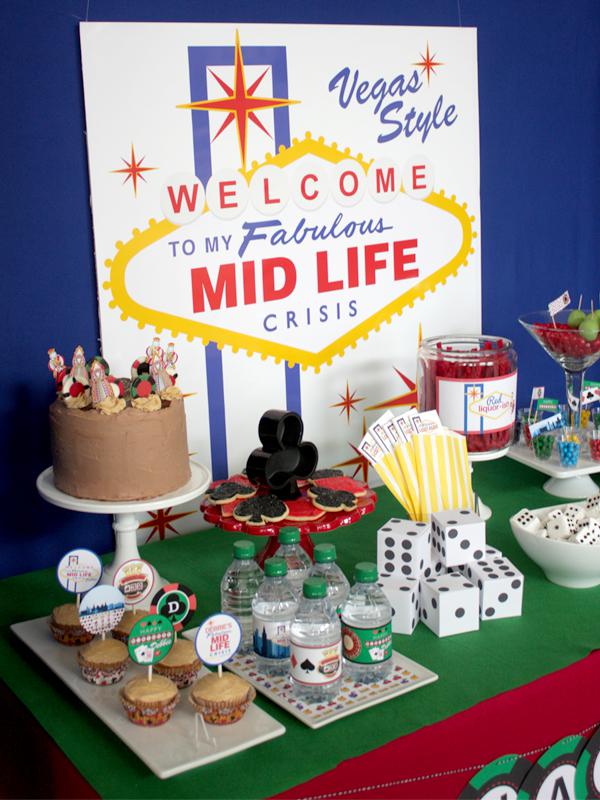 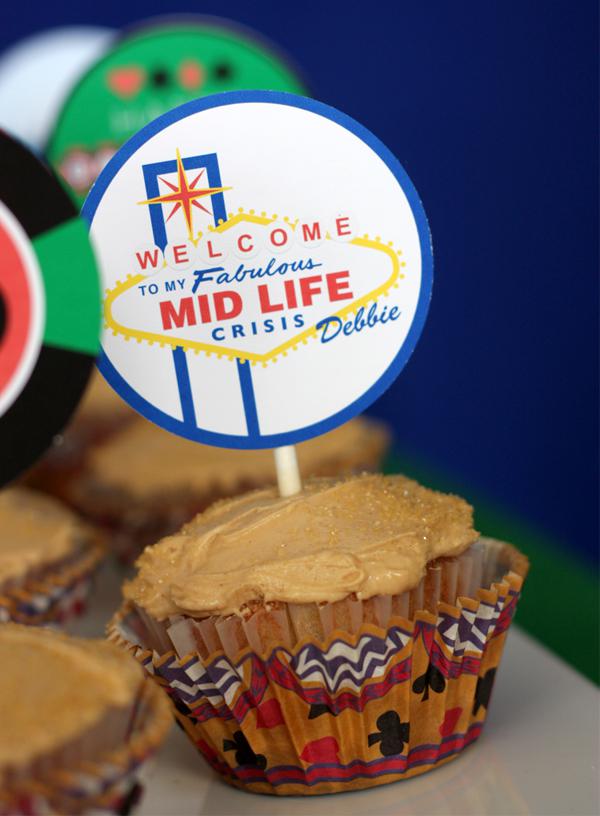 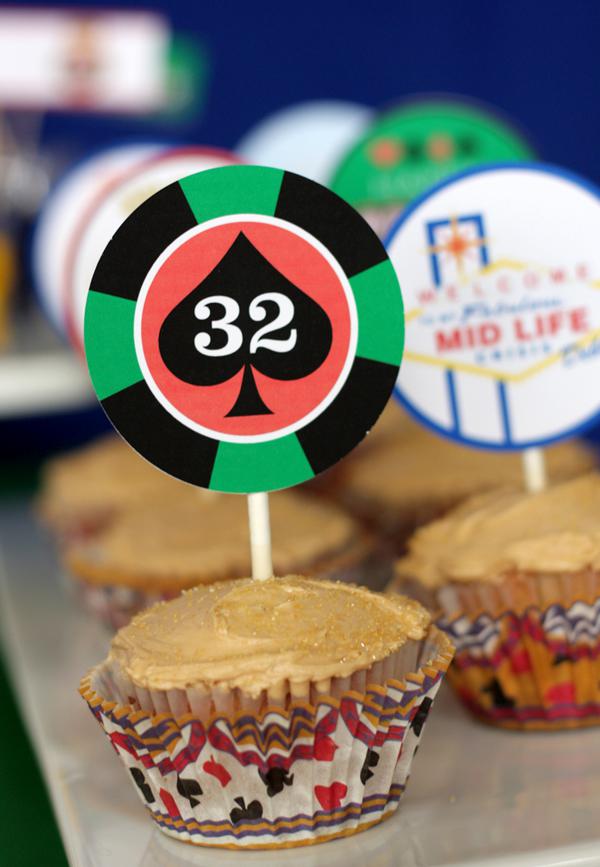 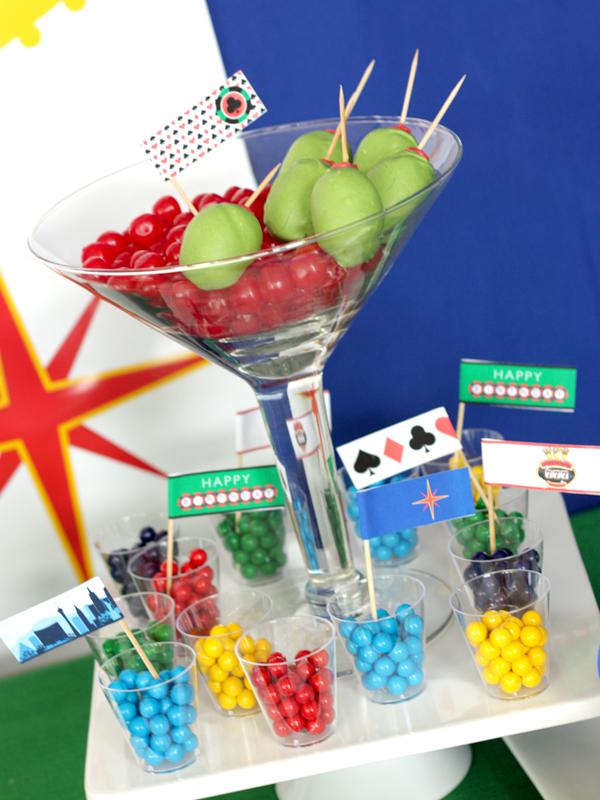 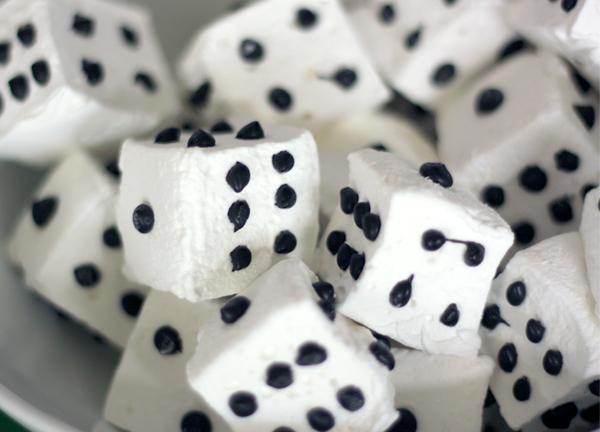 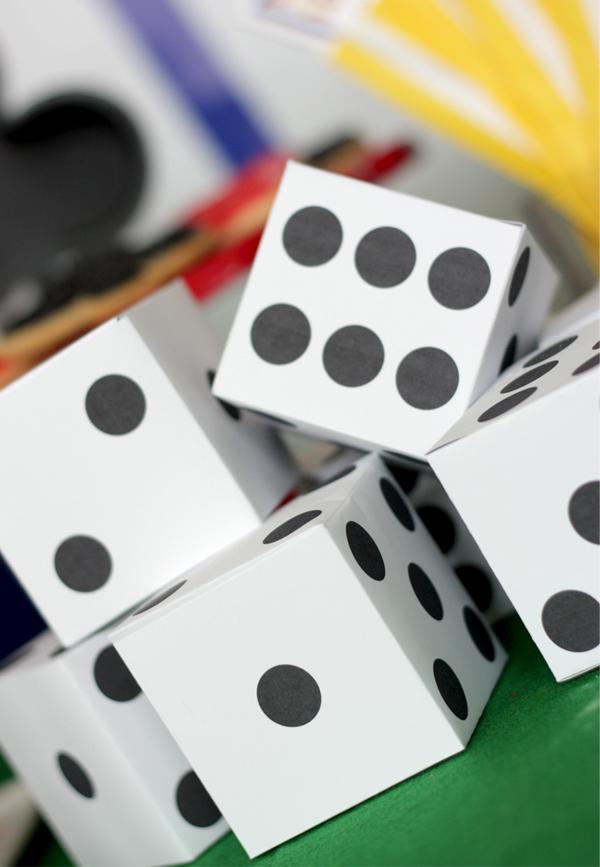 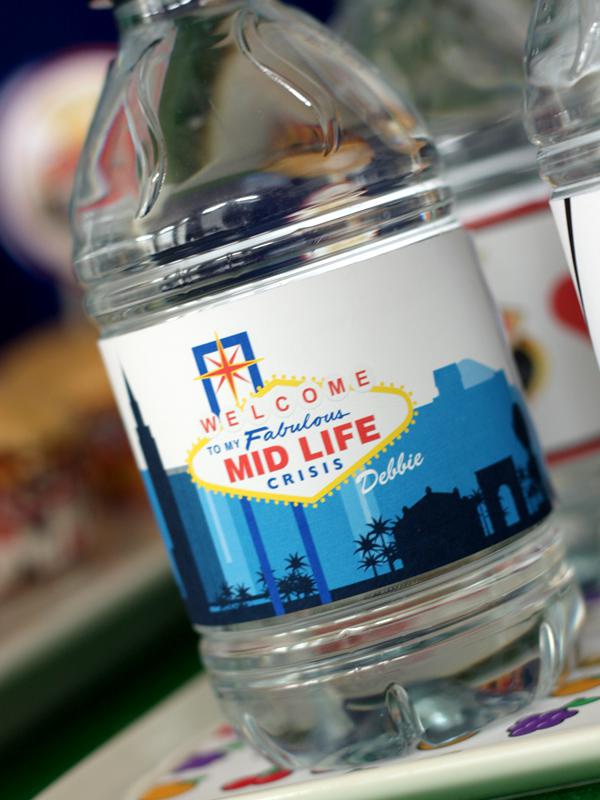 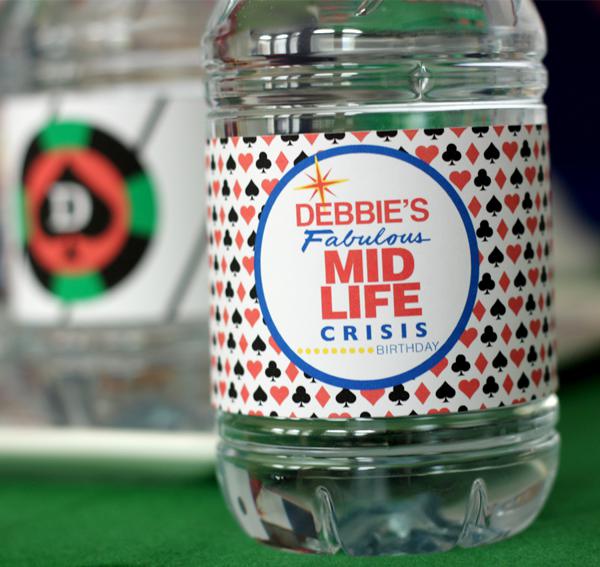 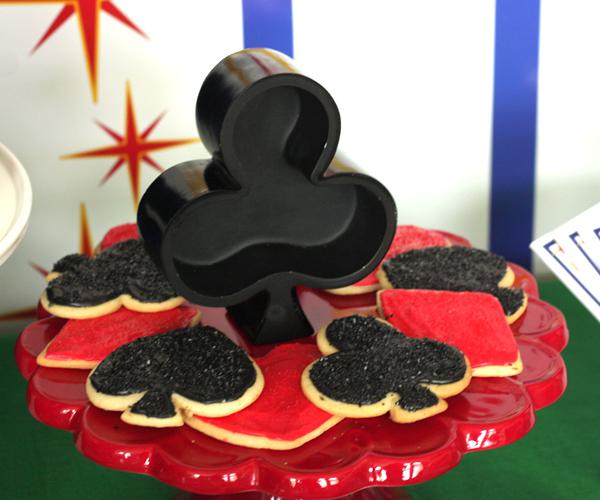 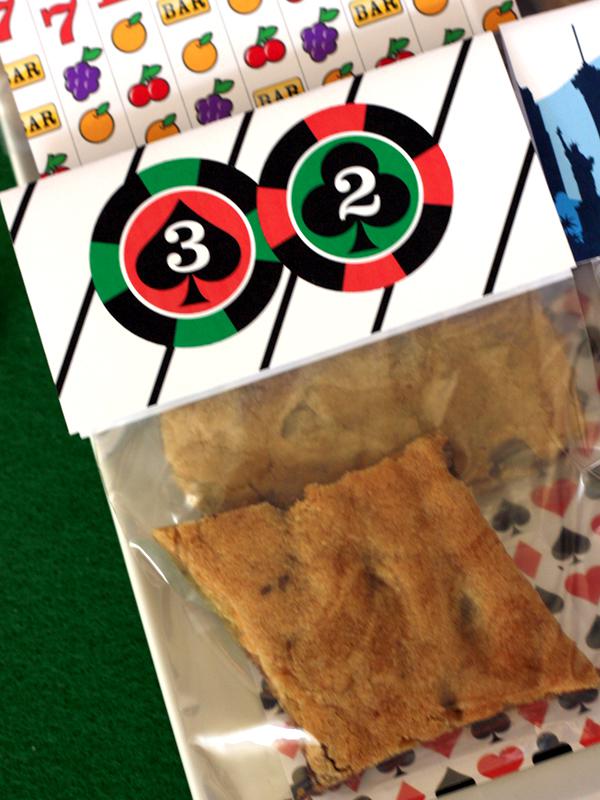 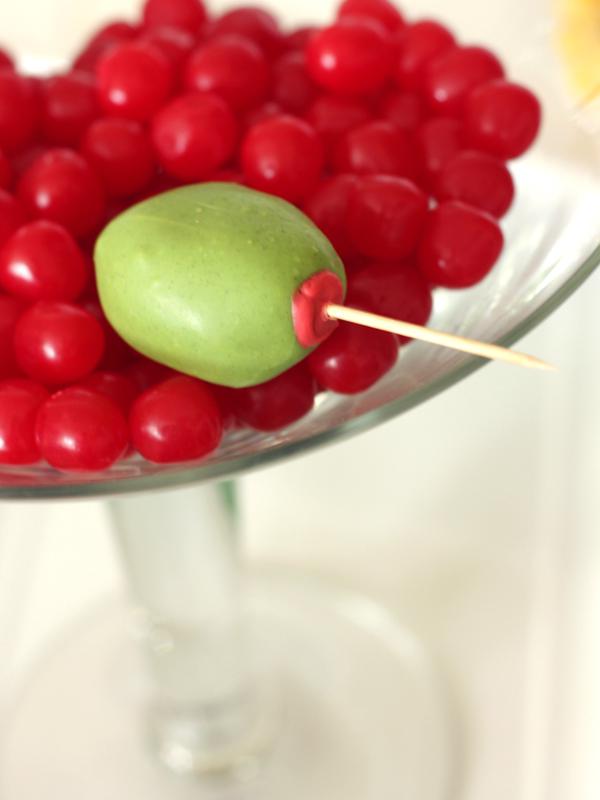 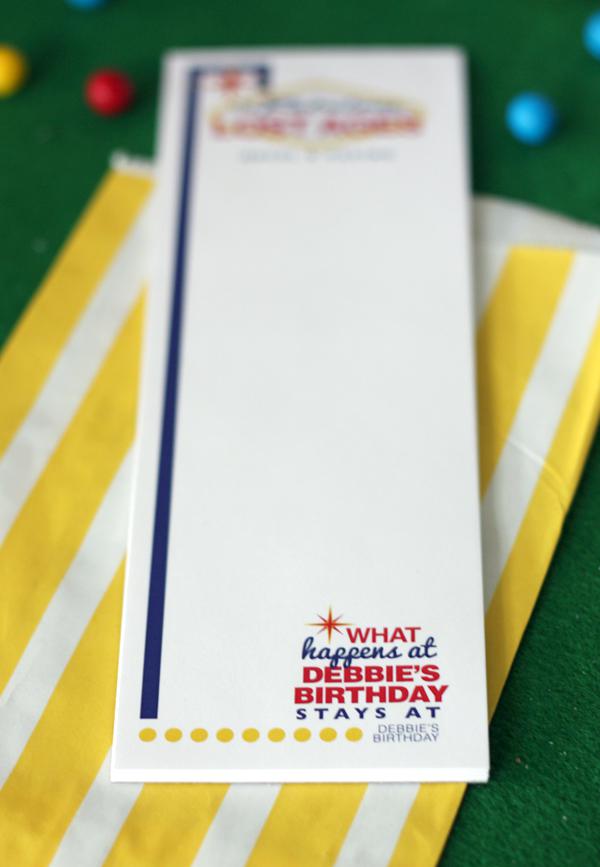