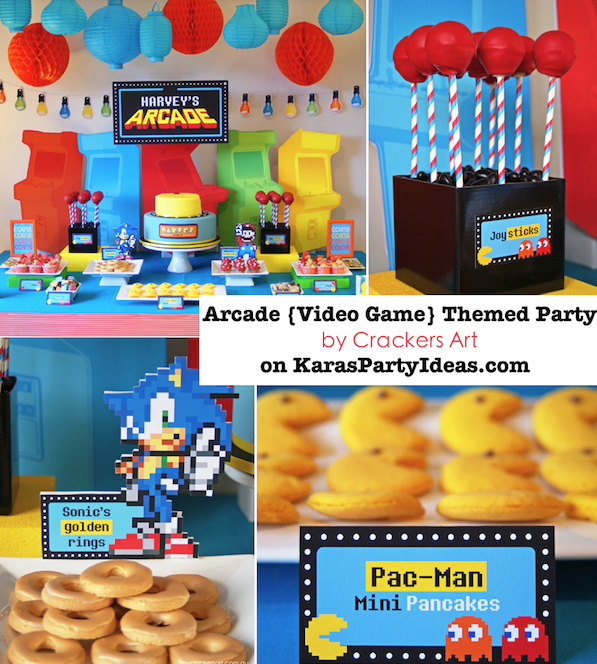 What a fabulous birthday party theme that any child would adore! There are so many incredible ideas here! Some of my favorite party elements are:

Sarah said this about planning the party- “My son Harvey absolutely loves Pac-Man after Santa brought him an old-school games console for Christmas which you plug into the TV. And when we saw ‘Wreck-it Ralph’ at the movies, he was delighted to see Pac-Man amongst the characters and became fascinated with the idea of amusement arcades and arcade games. We visited a local (modern) games arcade, and Harvey couldn’t believe some of the machines spat out tickets that he could then redeem for a prize. Bonus! So when I suggested we could create his own games arcade for his birthday in the middle of our lounge room, he just about fell over!

I decided to give everything a retro arcade flavour, in keeping with the spirit of 80’s video games. I had a lot of fun creating all of the food items myself, except for the cake which I had professionally made to a simple design I created. We converted our lounge room into a games room, with everything from foozball, air hockey, pinball, video games, and velcro darts to play with. After a sit-down lunch of sandwiches and hot food, we played team ball games in the back yard so the kids could earn tickets to redeem at the prize counter. There are always some kids who are reluctant to play party games, so this enticed them to participate because everyone who did automatically earned tickets. Then the winning team earned bonus tickets so they had more to redeem at the prize counter.

All in all it was a really successful party and the kids absolutely loved the arcade. Sometimes the noise level hit fever pitch as they all played the games together and egged each other on…just like in a real arcade!”