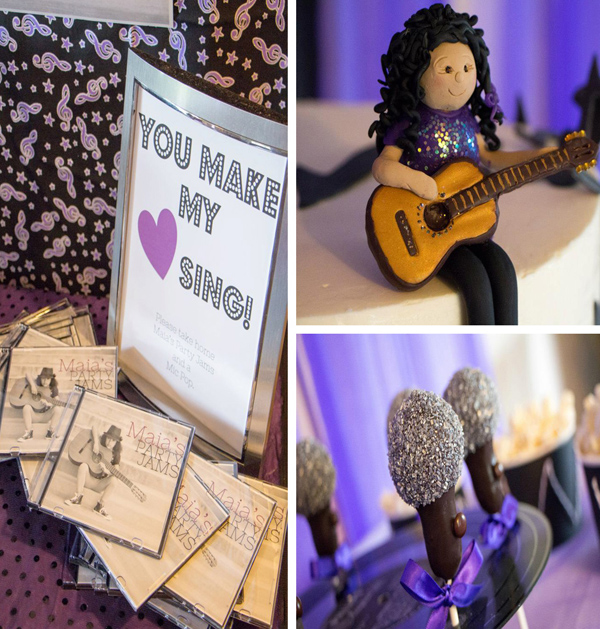 What an awesome party for a little girl or even a teenager.  It has lots of cute ideas that I love.  Some of my favorite elements are: 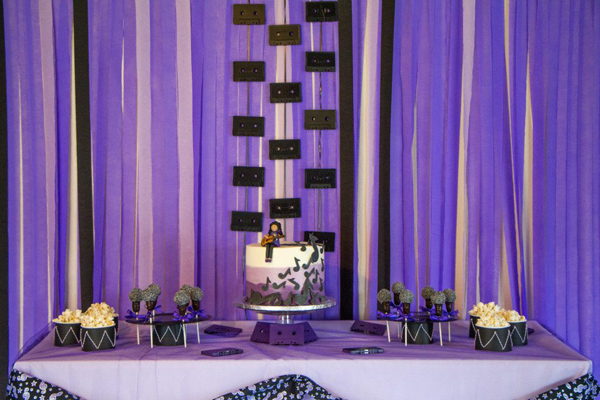 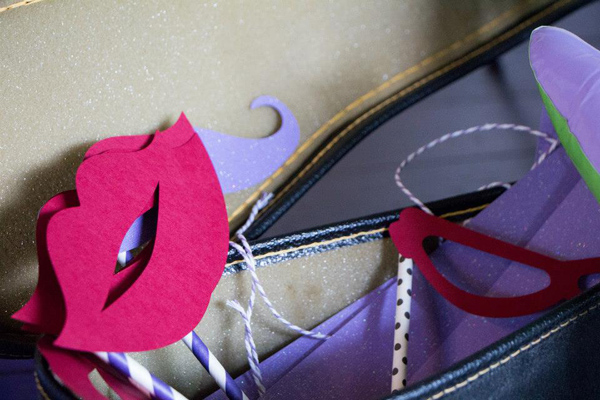 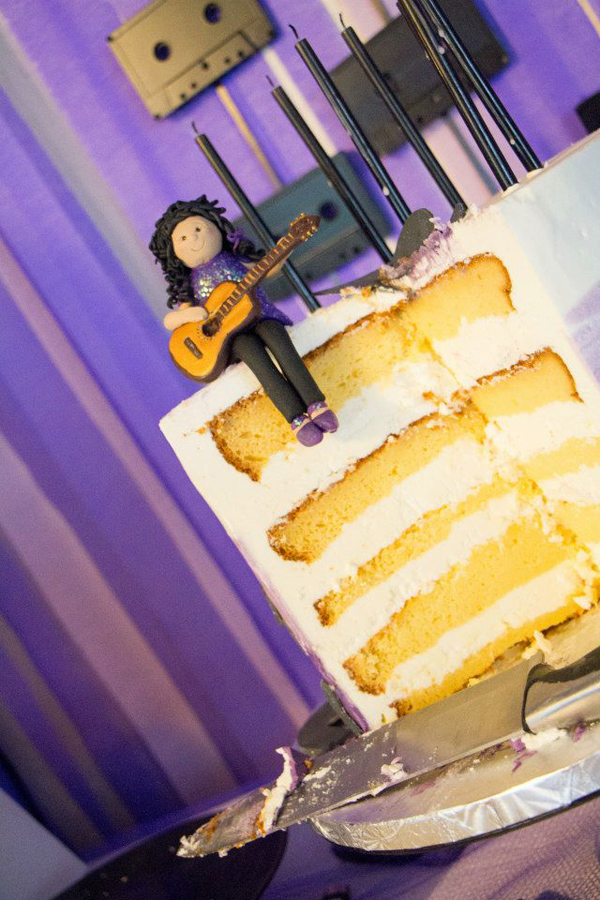 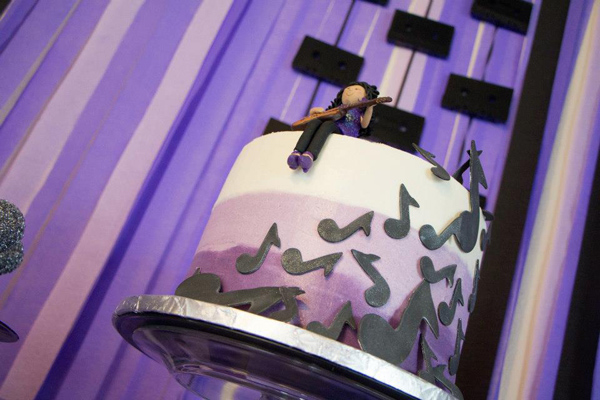 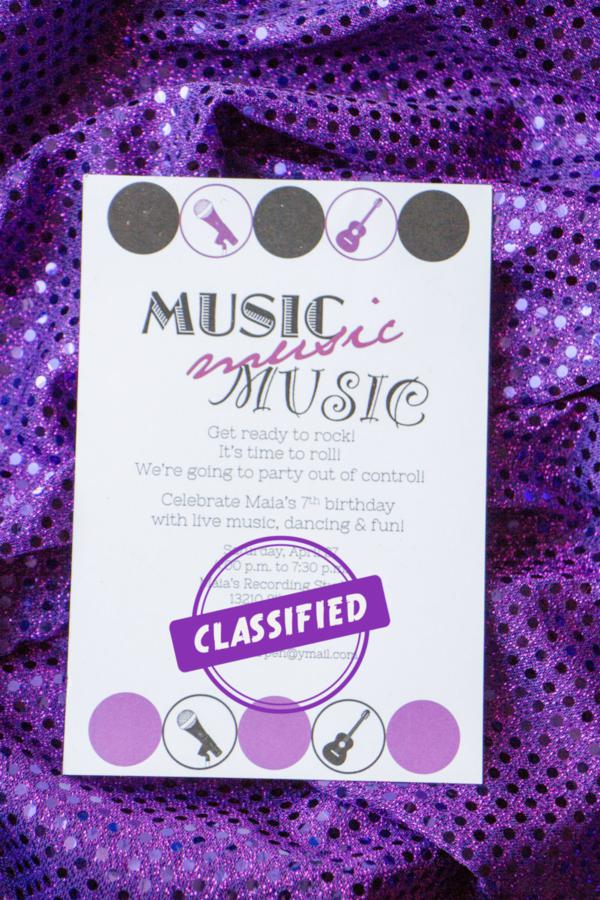 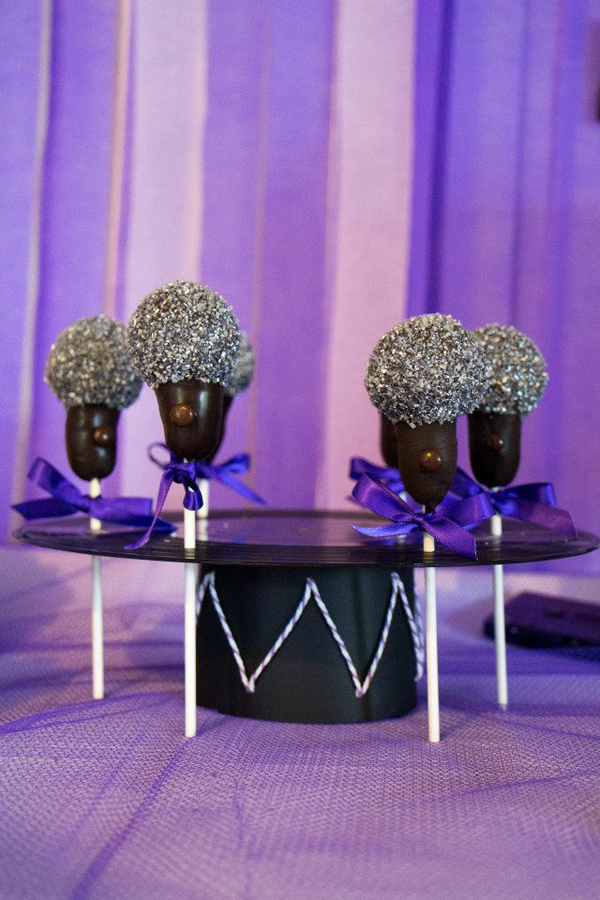 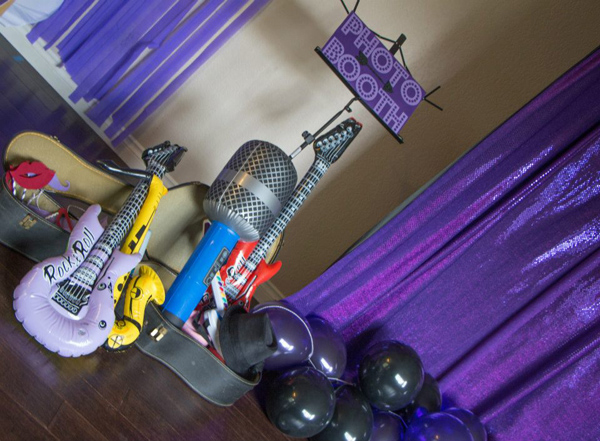 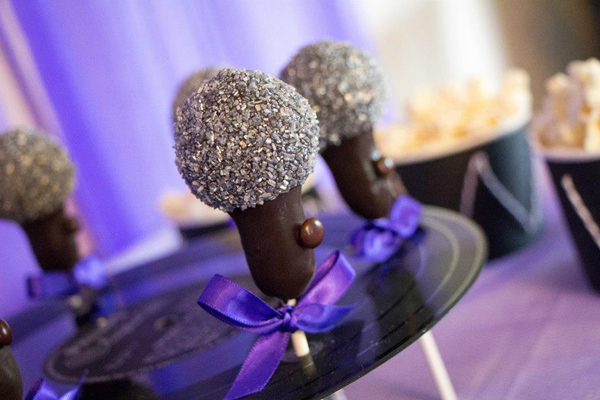 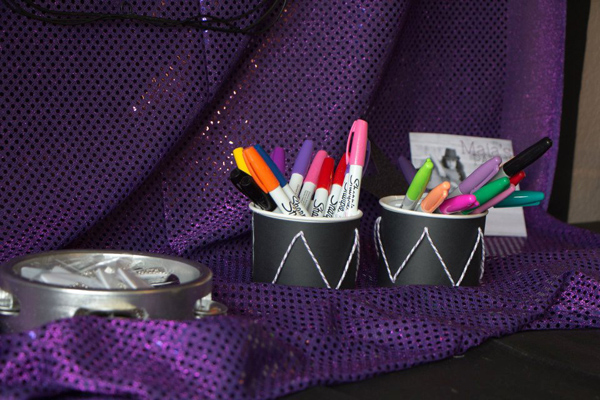 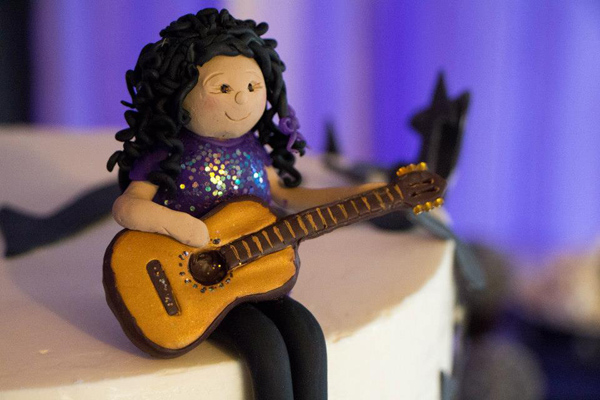 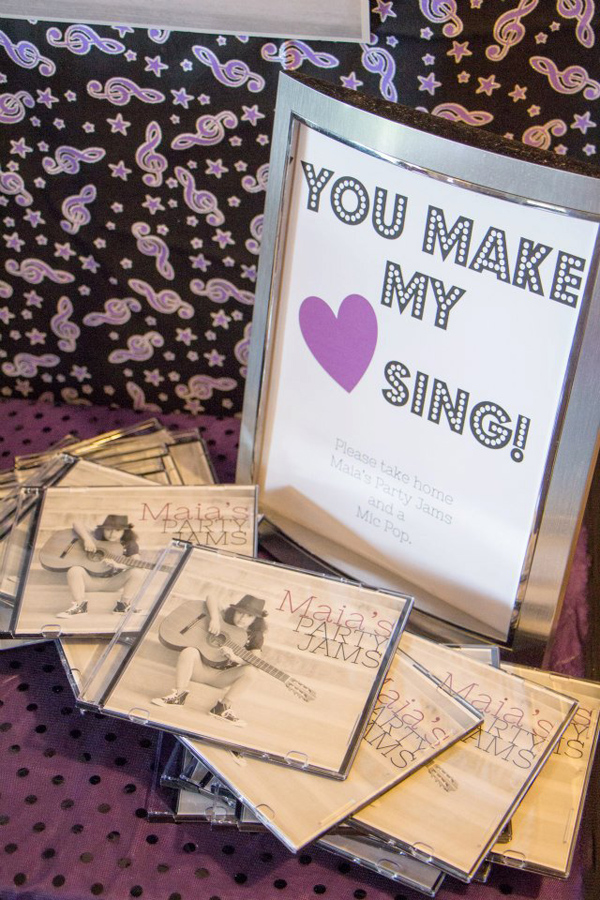 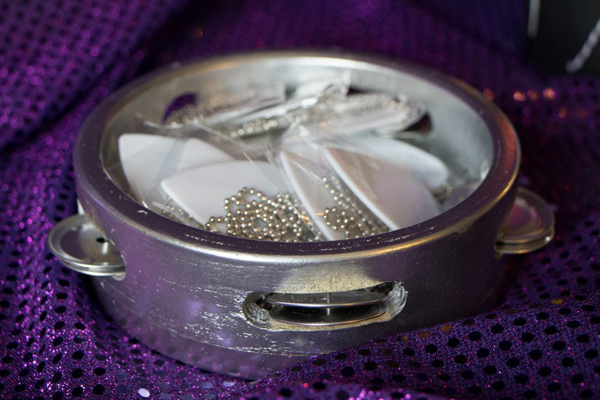 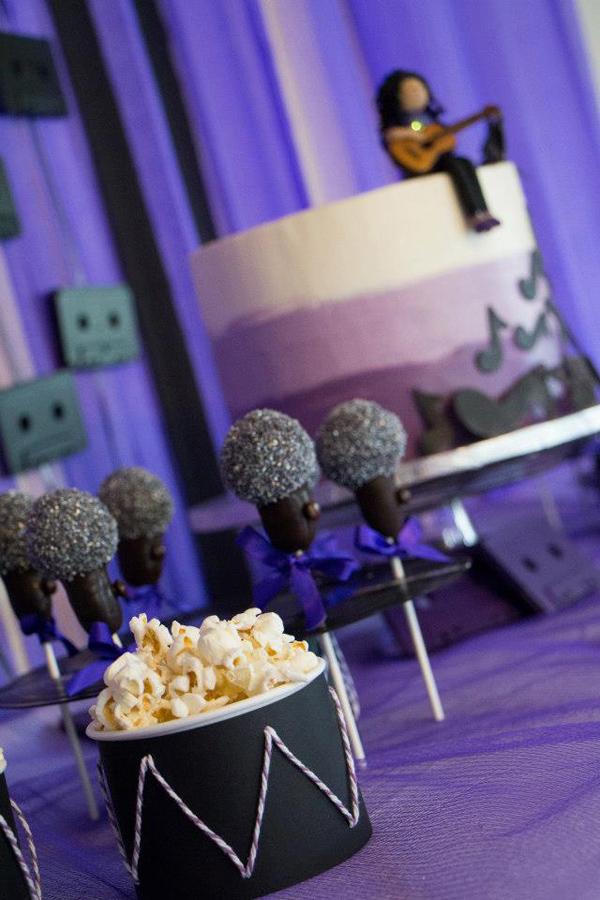 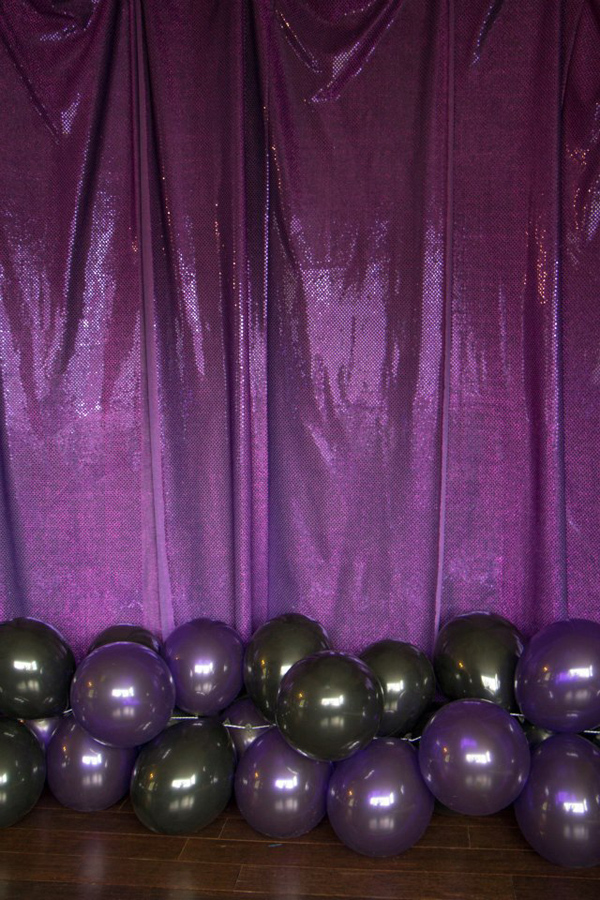 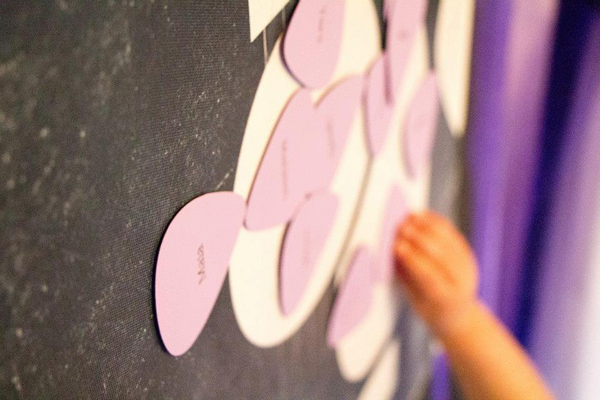 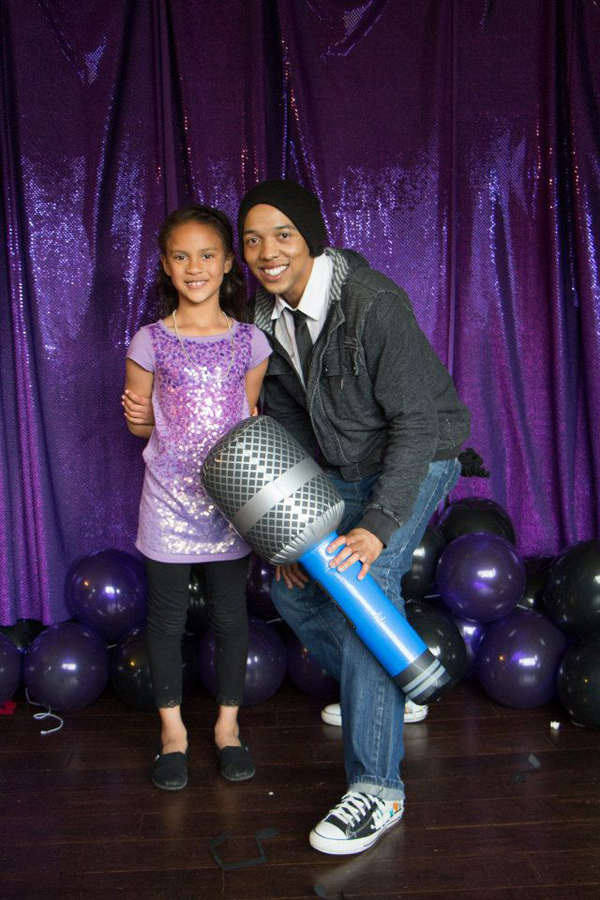 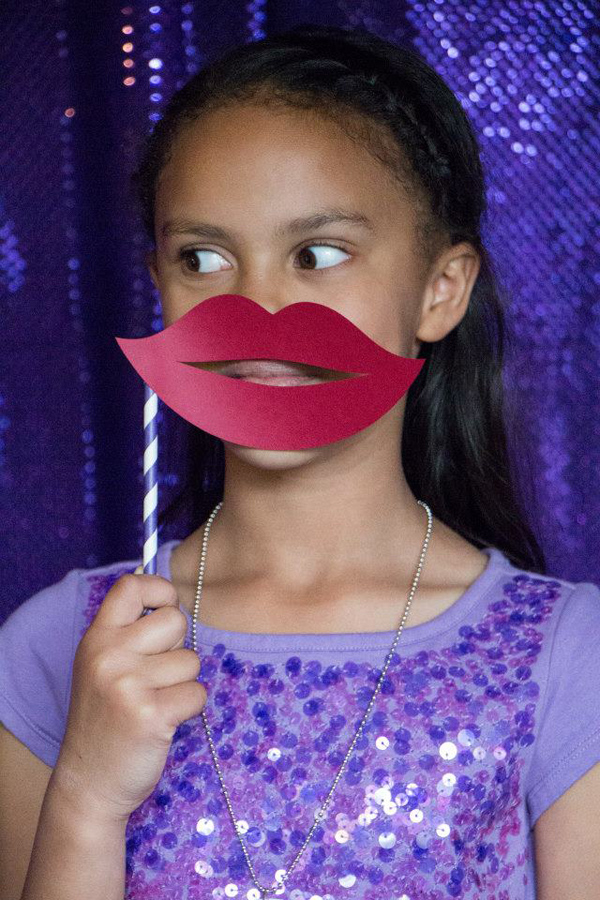 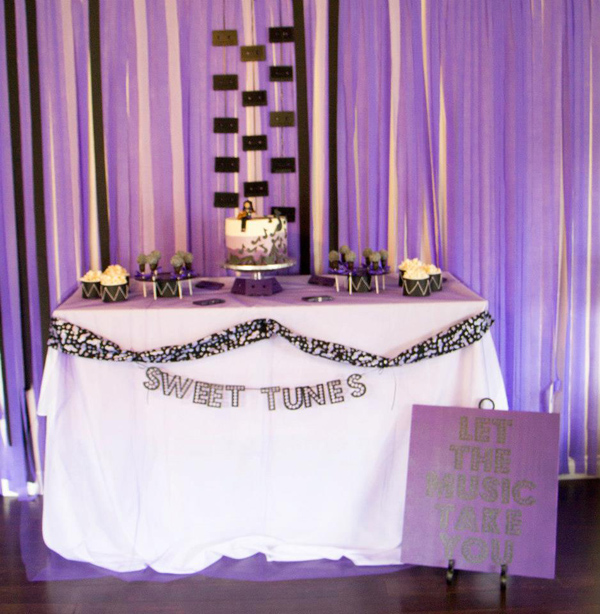 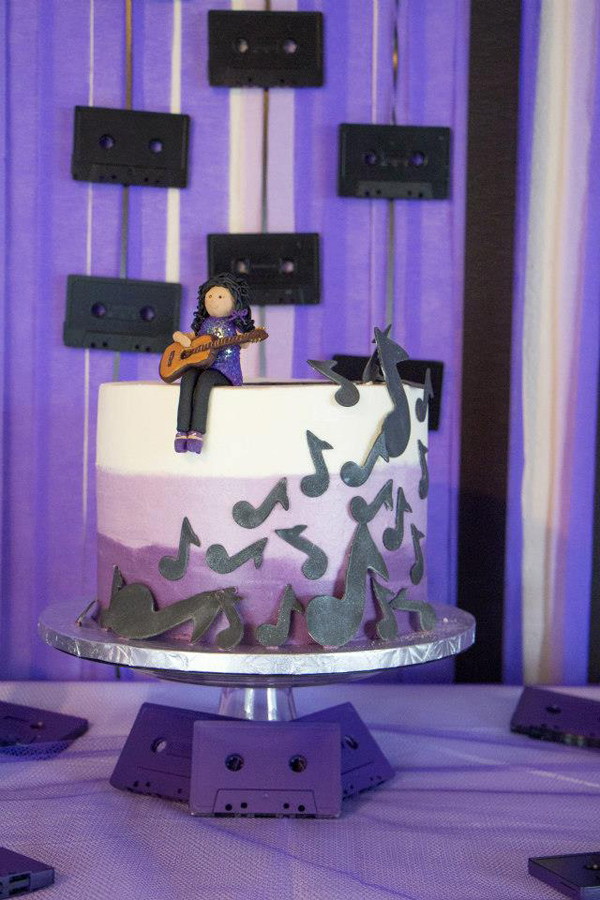 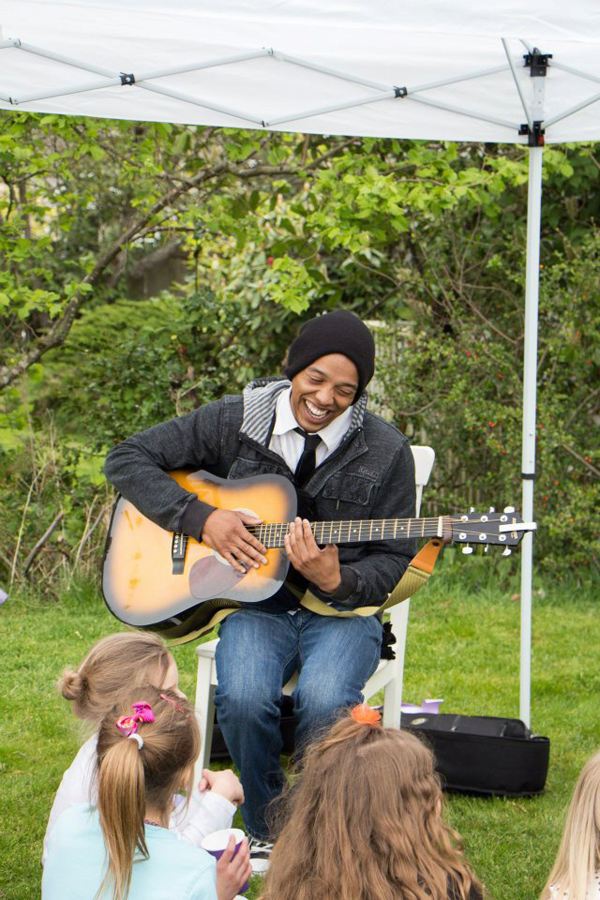 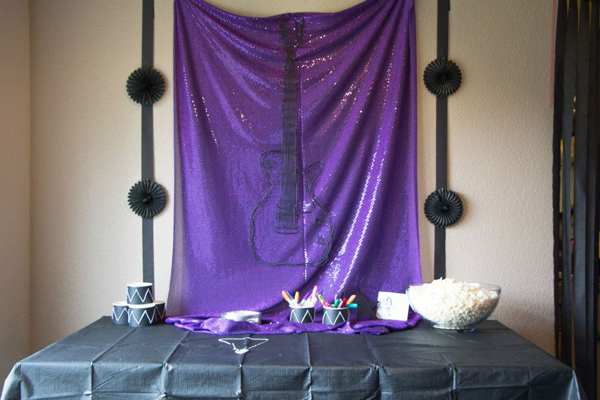 Jennifer said this about planning the party- “We have ALWAYS made a big deal of our girls’ birthdays, but this party takes the cake!
For Maia’s 7th birthday she chose a music themed party. We had hoped it would be outside, but the weather here in Seattle decided to disagree as the day got closer, so we improvised.

The invites were designed by me and will soon be available in my Etsy shop. I used microphone and acoustic guitar graphic images.

I created a backdrop for the dessert table using two shades of purple streamers and a few black strands as well. Behind the cake I hung 3 vertical garlands of old school cassette tapes that I had spray painted black and attached to black curling ribbon {the girls at the party did not even know what cassettes are, of course}.
The phenomenal dessert selection came from Dianne’s Delights in Seattle, WA. The cake is a TALL 8 inch round cake with three shades of icing and a tasty trail of shimmery gum paste music notes traveling from top to bottom. I am not sure what she puts in her icing, but I had to keep eating it because I was trying to figure out what the incredible hint of flavor was… I never figured it out. The second dessert choice was delicious, adorable microphone cake pops, also made by Dianne. These were no teeny tiny morsels either. They were SO rich that one cake pop was more than enough!
Now, what about the incredible cake topper you see atop the creation? My mother handmade the topper to look JUST like my daughter. The guitar has the same intricate design as her own guitar and the shirt was made to match the exact shirt she would be wearing at the party.
Last treat, popcorn drums! I made these using paper, twine and to-go cups {tutorial on my blog} from TulleANDTwig on Etsy. I had hoped to make purple popcorn to fill them with, but I realized as the party approached that I just wasn’t going to have time. Even the plain popcorn was a hit!
In front of the table I stuck the sign I had originally made to go outside at the start of a paper music note path to our front door, but given the weather, I had to find it {and the music notes} a new home. Let the music take you!
Next to the dessert table is a canvas print that I found at Ross a few days before the party. We used it for pin the pick on the guitar. The girls had a blast! I think a few of them were peeking…

This was the first time I created a photo booth for a party and I can safely say a photo booth is now on my MUST HAVE list. It was so FUN! The backdrop was created using 3 purple sequin fabric panels with black plastic tablecloths behind the panels to ensure that nothing else shown through. I gathered some blow up instruments, hats, glasses, necklaces, lips, ties and mustaches and tossed them into Maia’s guitar case. The photo booth sign is sitting atop Maia’s music stand.

We had the pin the pick game as well as an art project. When the girls first arrived they decorated guitar pick necklaces from Oriental Trading using Sharpie markers and Sharpie paint markers. They had a ton of fun with that project and had a little something to take home!
The BEST activity was the LIVE musical performance by local artist Brandon Pratt. We saw Brandon perform at Pike Place Market on Valentine’s Day and Maia thought he was awesome. Since I already knew we were planning a music party in a few months, I got in touch with him right away. The girls totally had goo goo eyes for sweet Brandon. He is not only adorable though, he is an amazing performer. Grown up attendees were blown away! We will be having him back FOR SURE!

We sent the girls home with a fun mix cd with some of Maia’s favorite songs, including a cover by Brandon and one of Brandon’s original songs. The photo on the cd cover was taken by me. Maia and I spent an afternoon doing a hipster, rock star photo shoot. We had a blast being a little goofy and the results were breathtaking. She is gorgeous AND cool!”