Looking for a unique way to celebrate a milestone anniversary? You will die over this Corpse Bride “Vow-lloween” Wedding Anniversary Party by Leslie Carpenter of The Lily Sage, out of Hyde Park/UT/USA!

Creeping with details both dark and mysterious, this spooky spectacle is something serious!

So ring the gong and step on in and watch for the following, included details, screeching within: 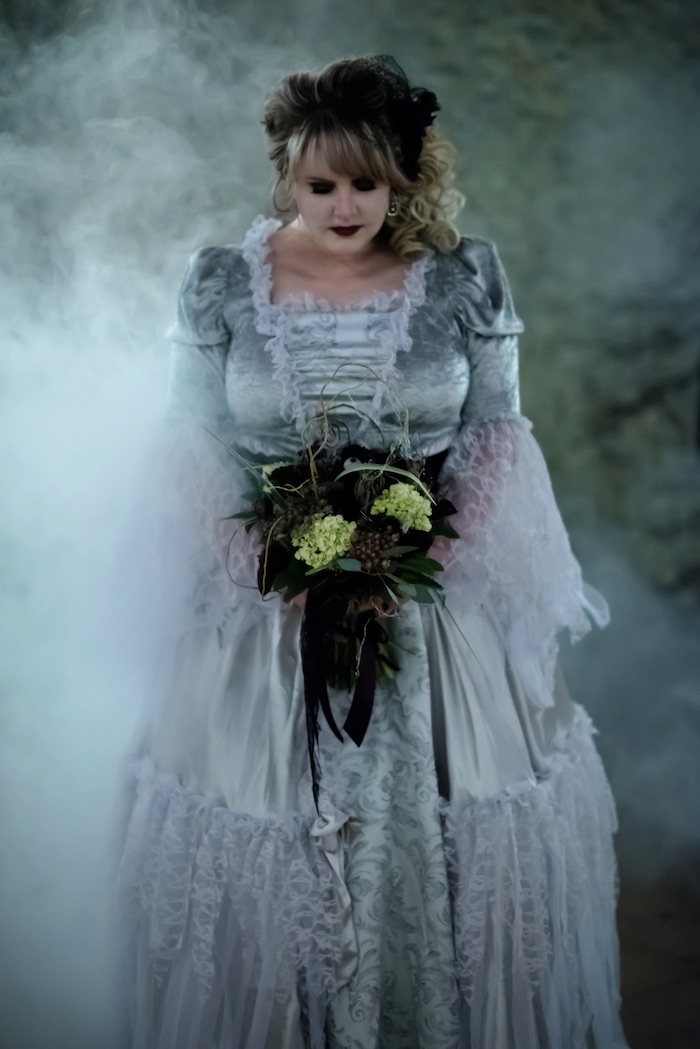 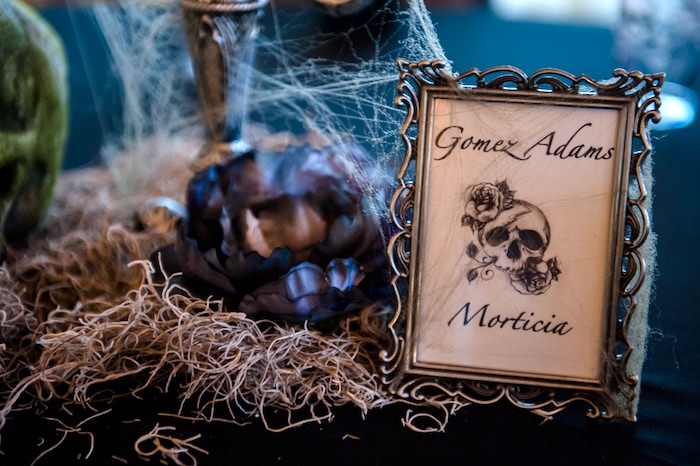 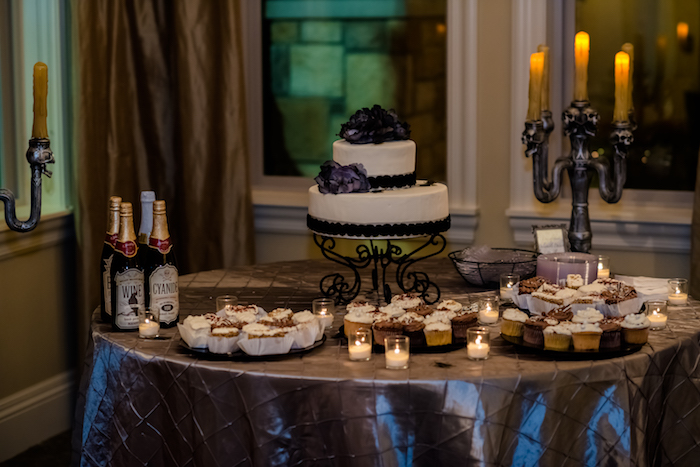 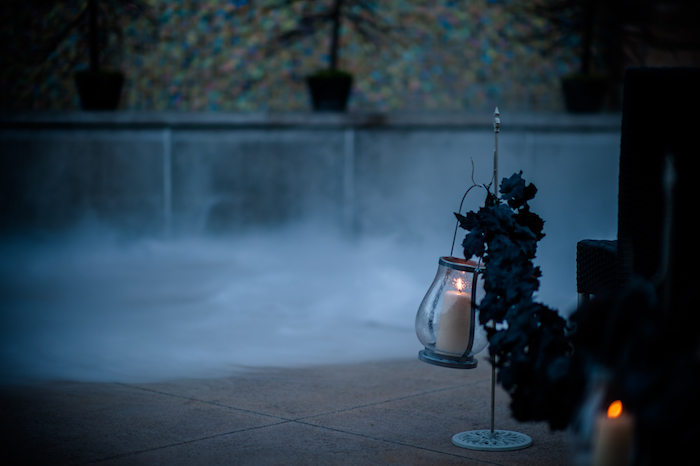 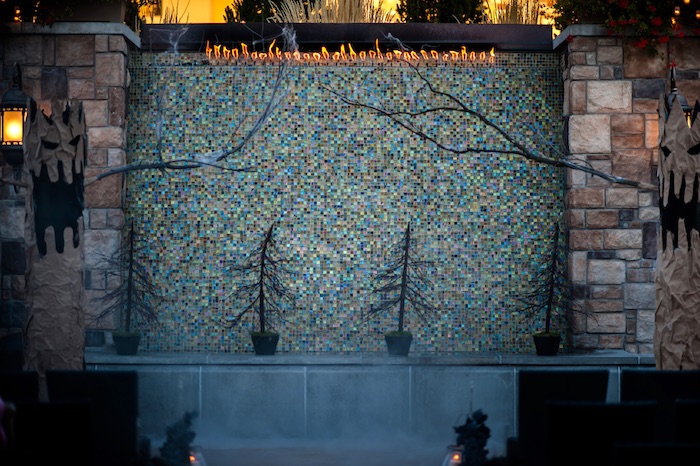 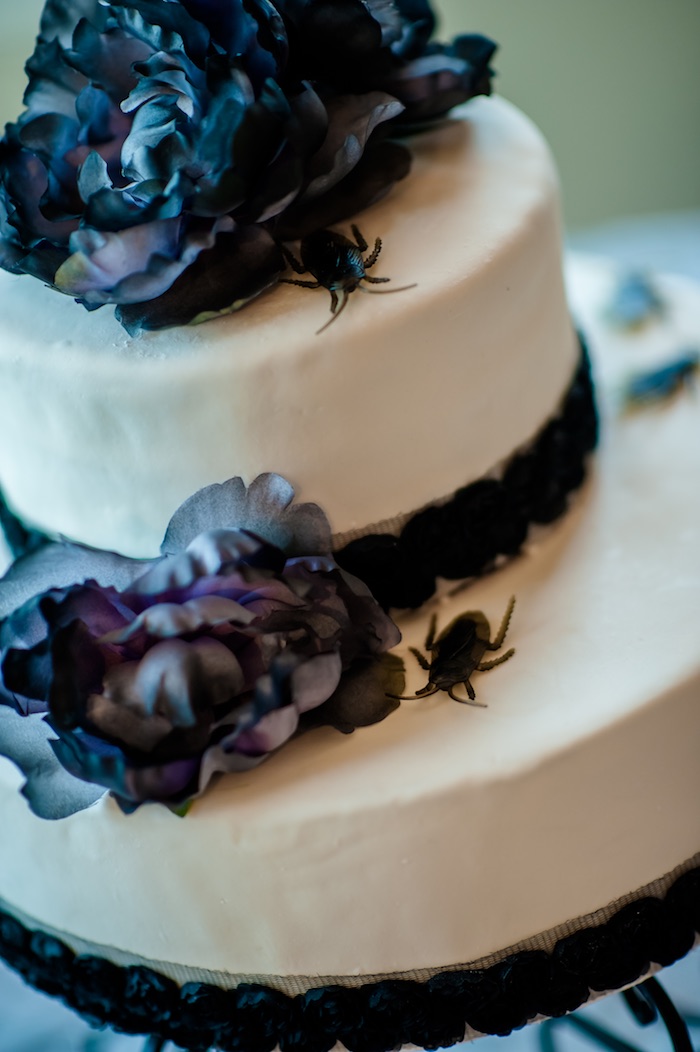 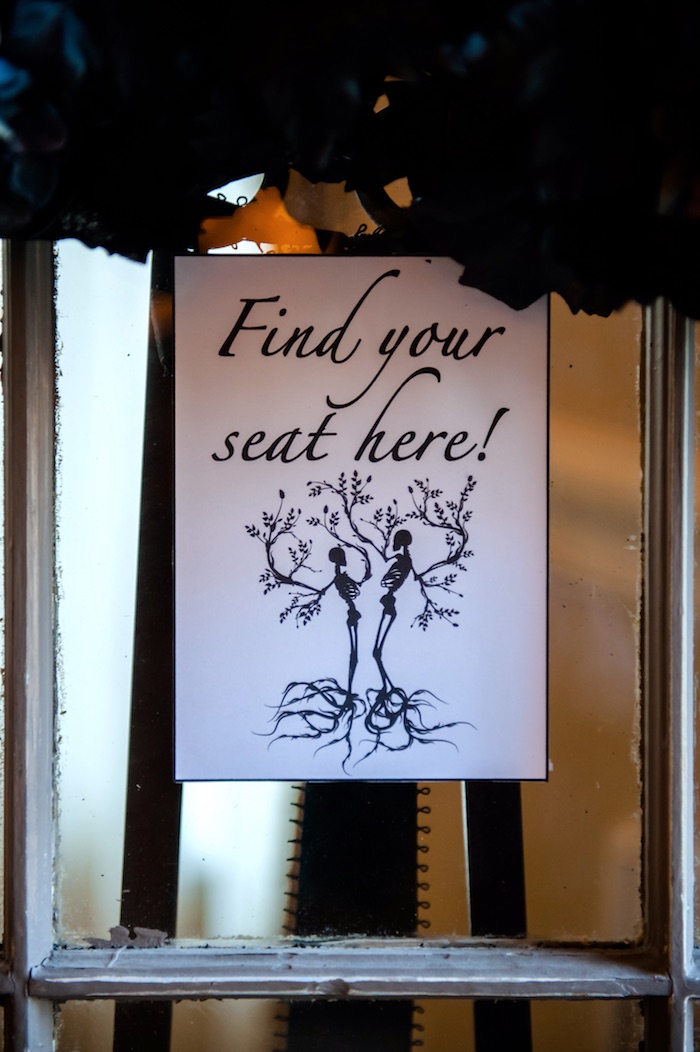 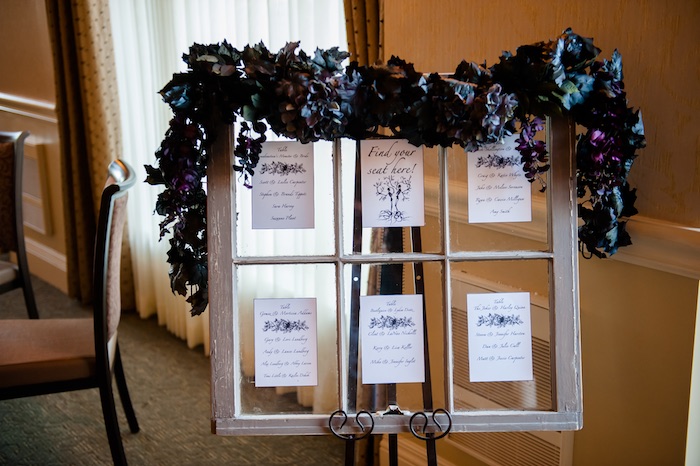 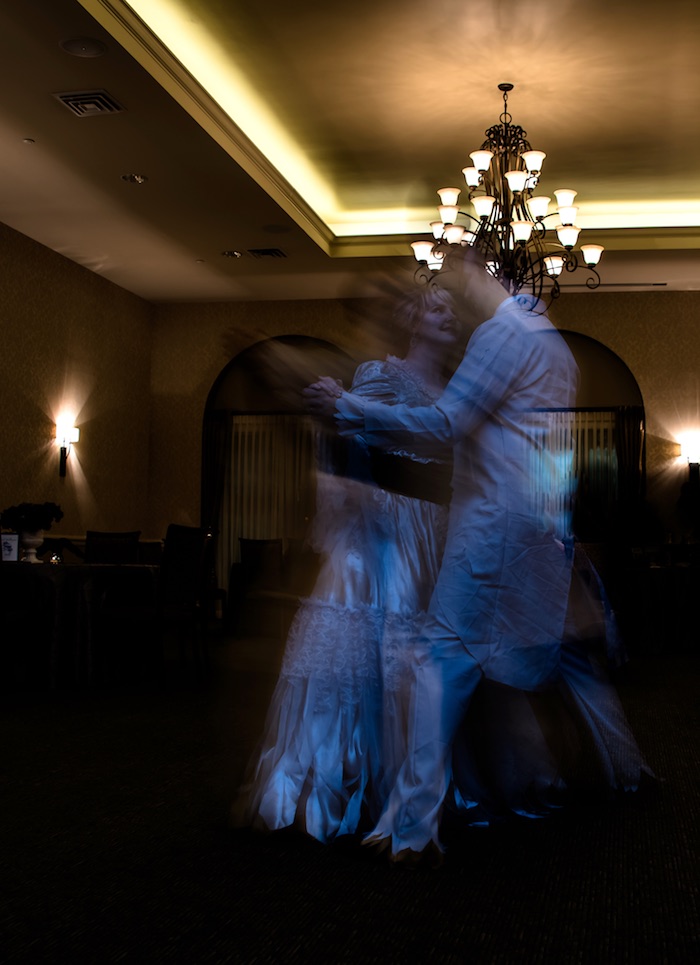 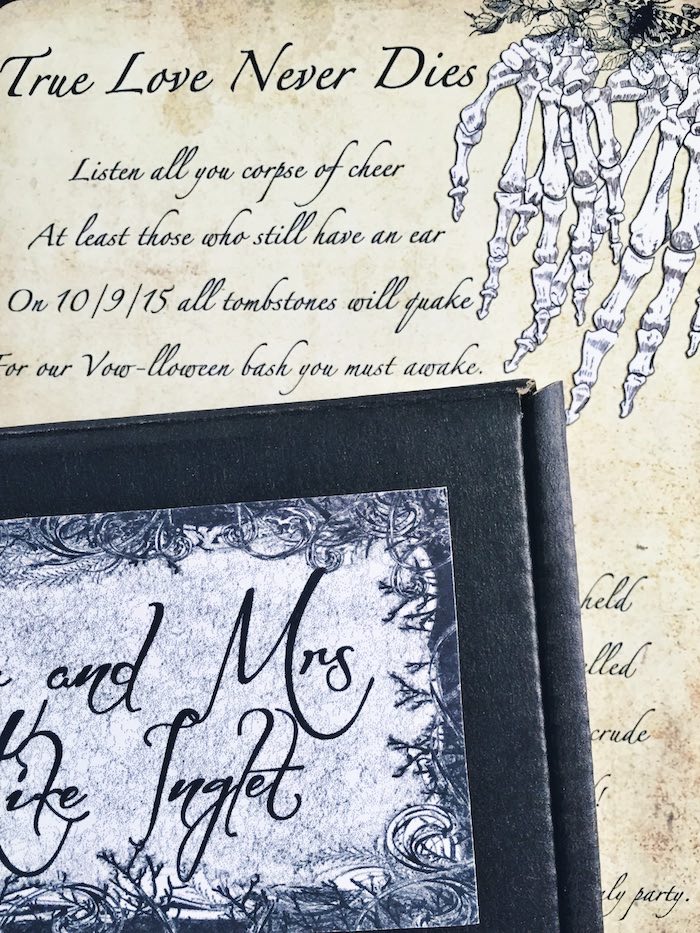 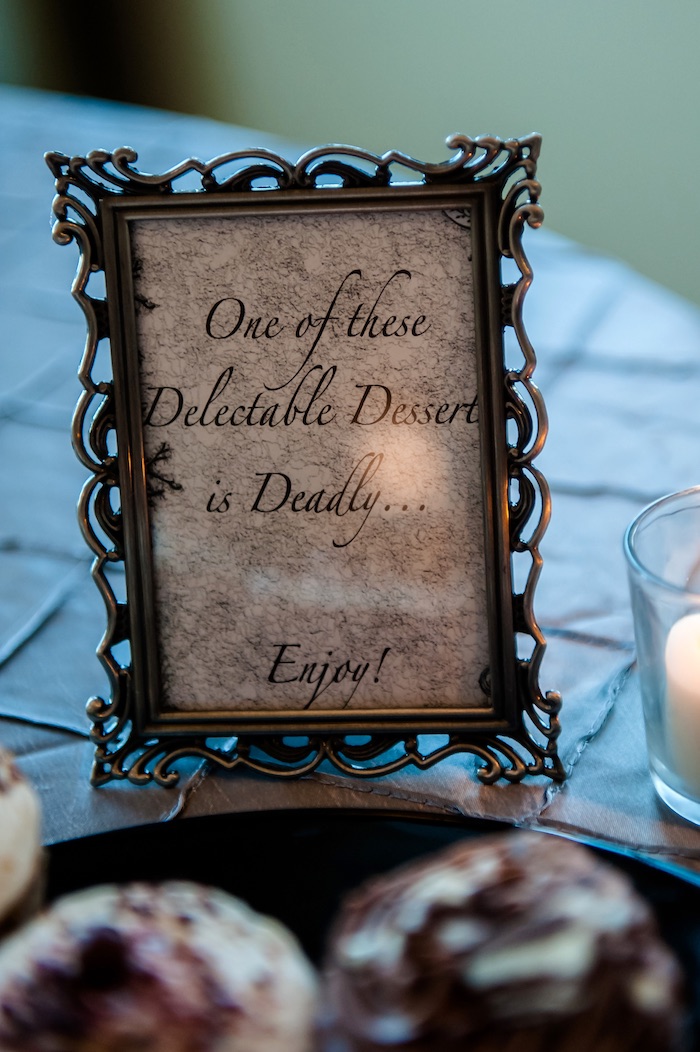 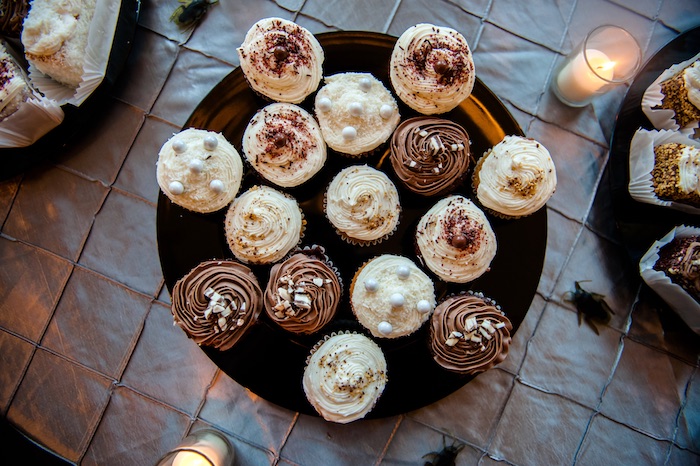 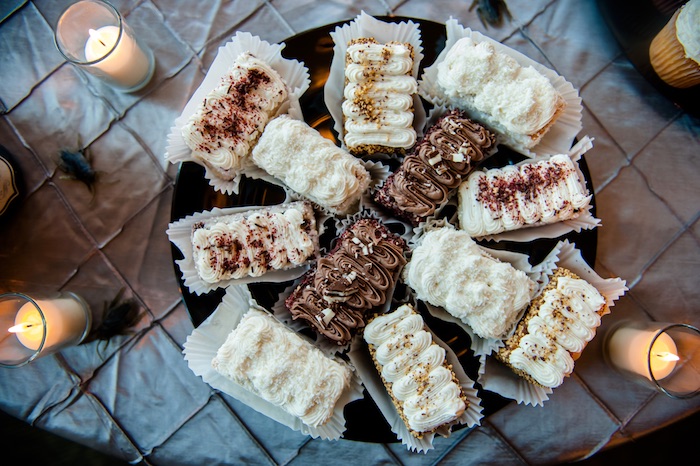 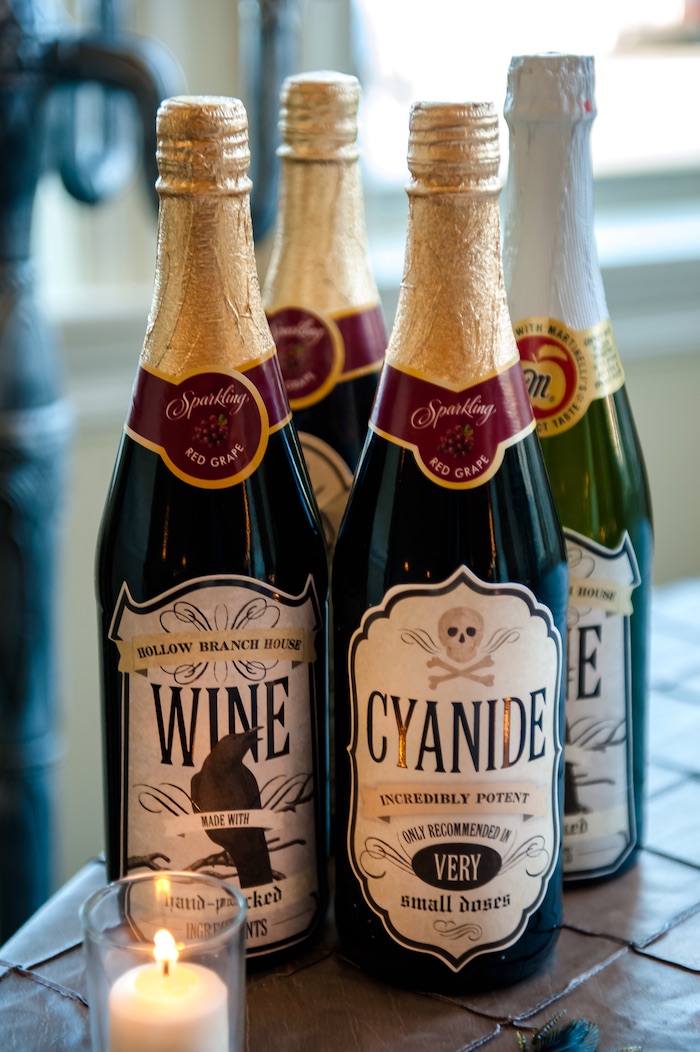 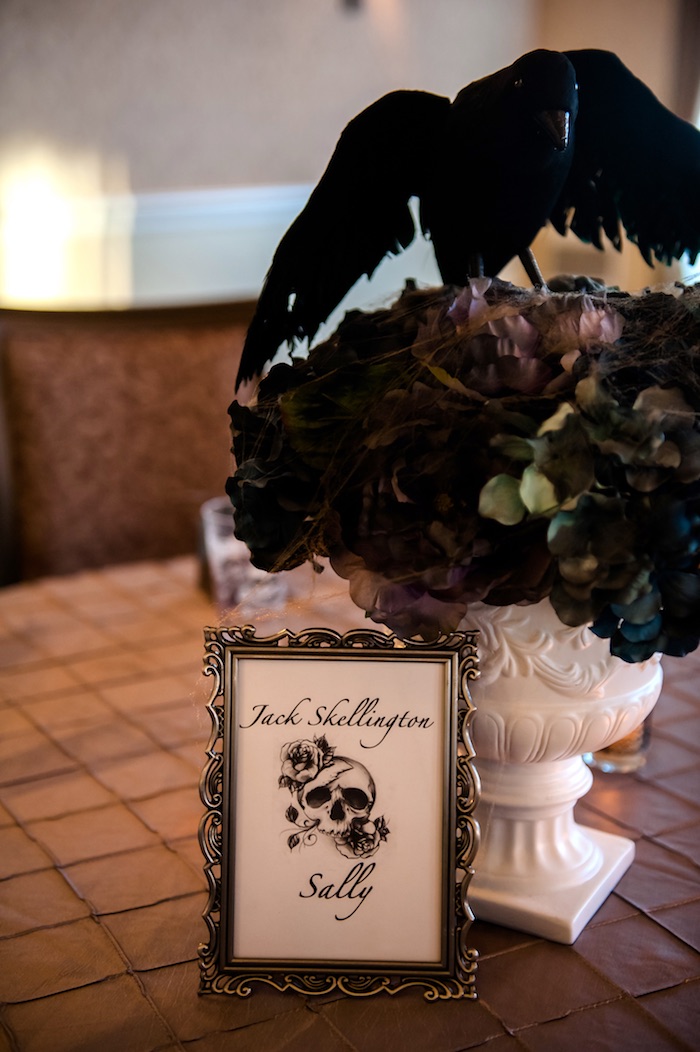 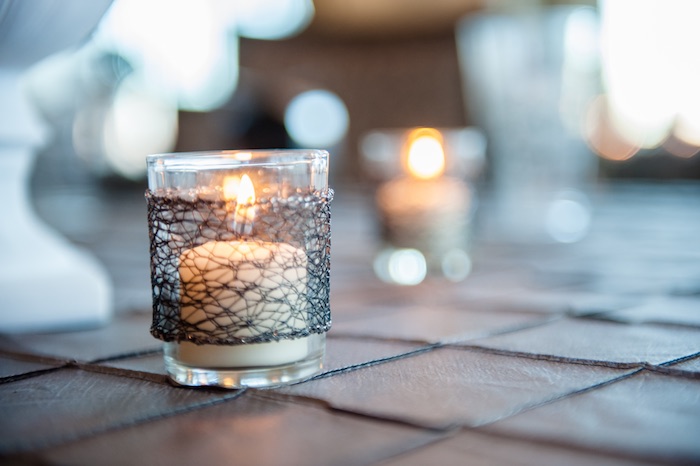 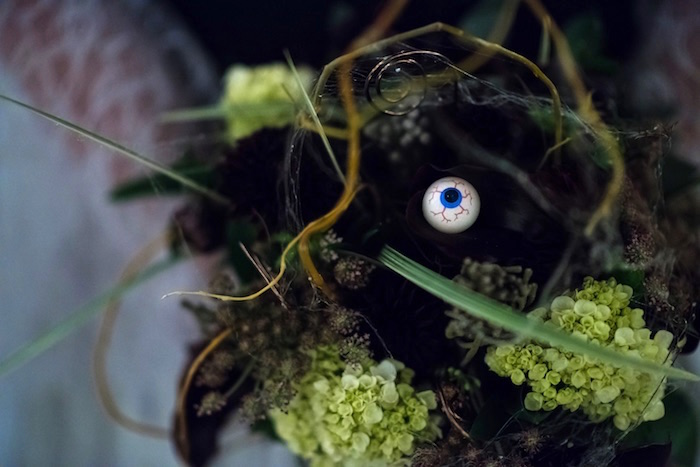 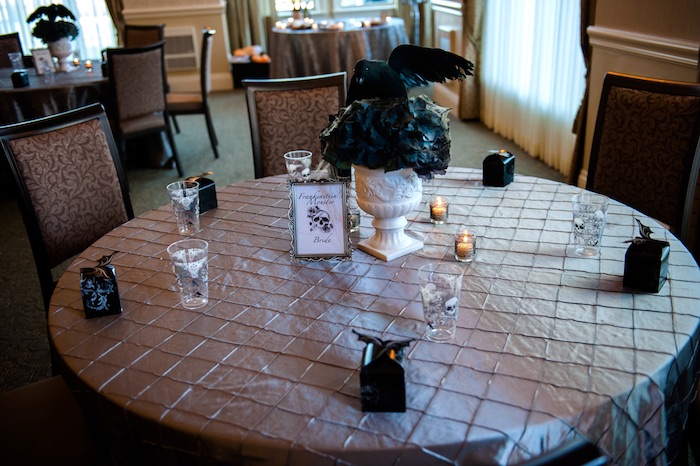 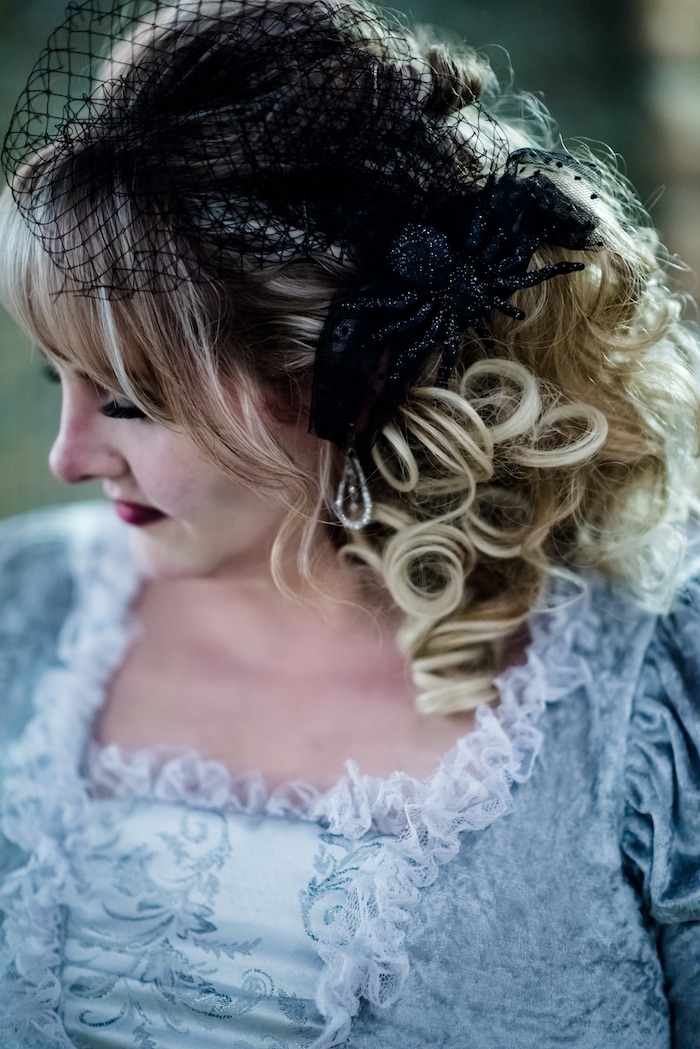 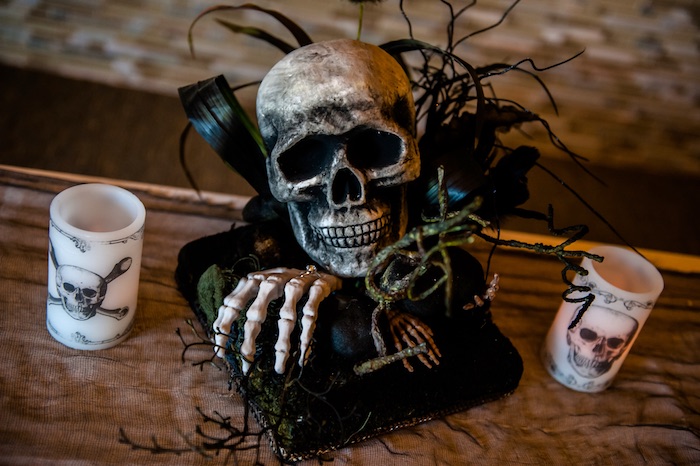 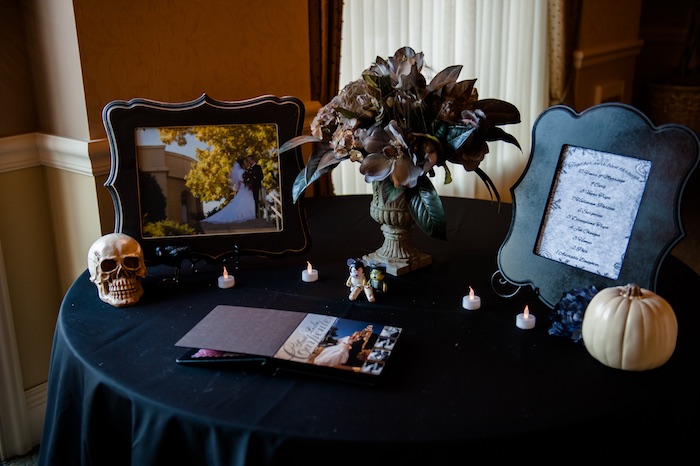 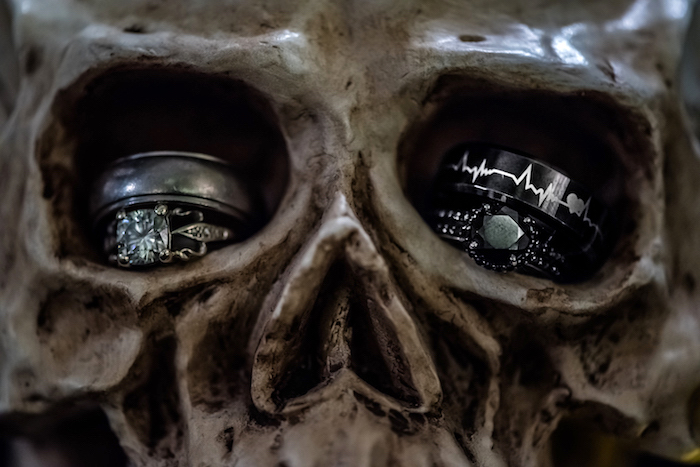 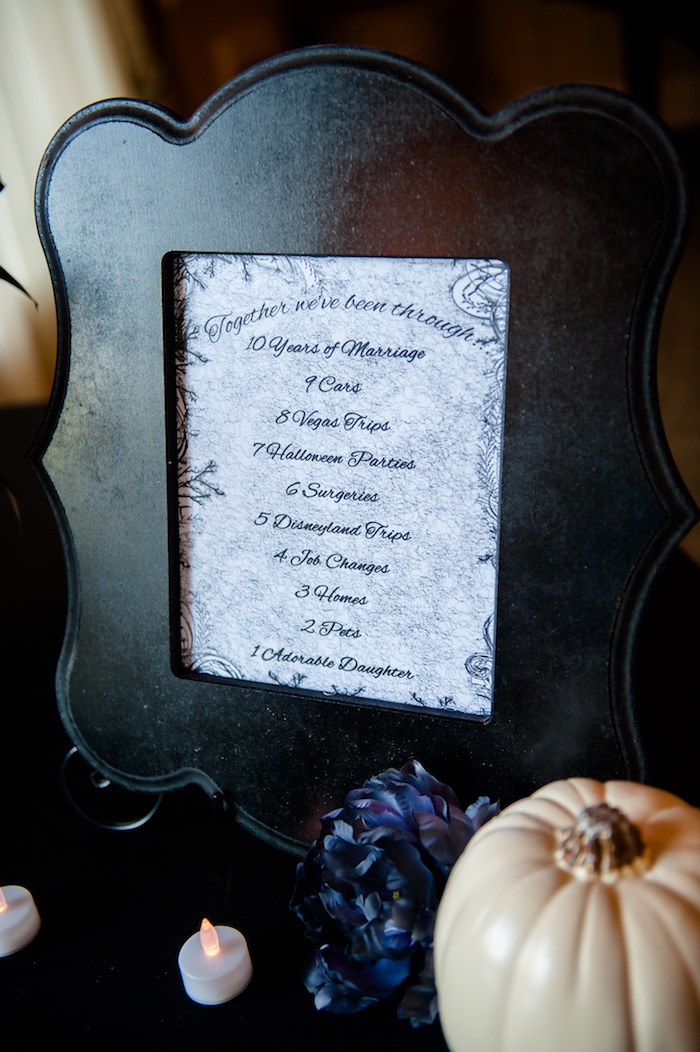 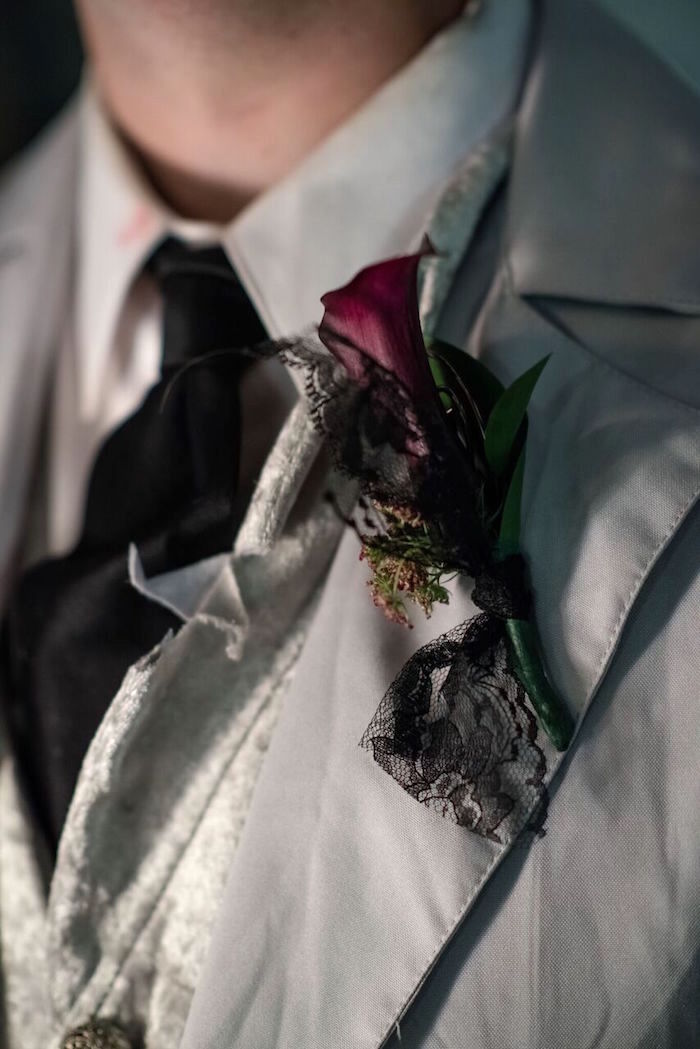 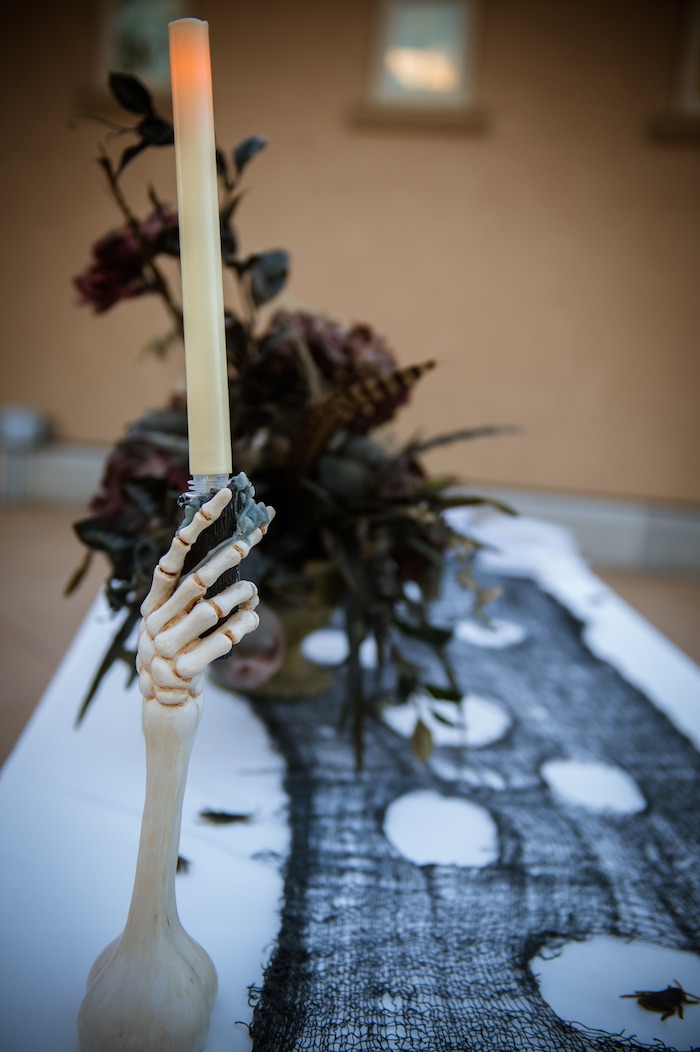 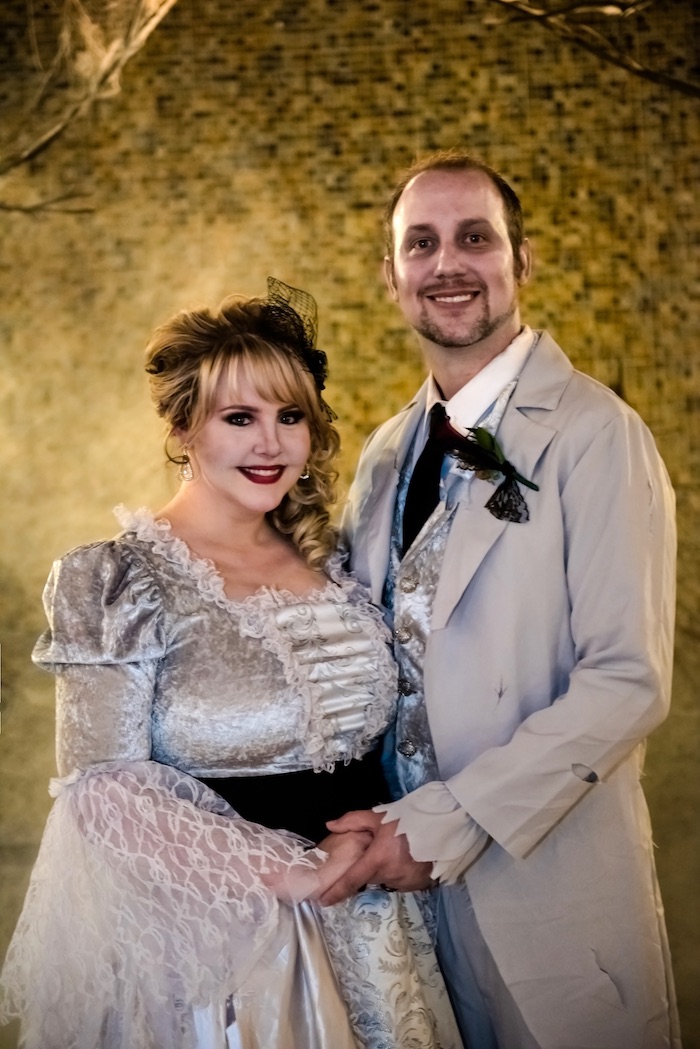 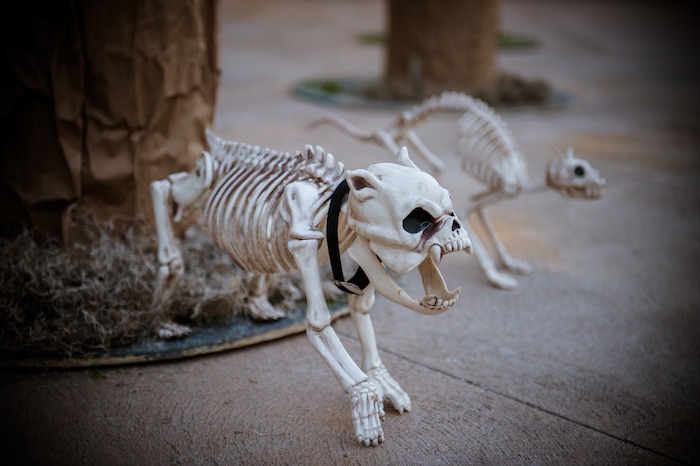 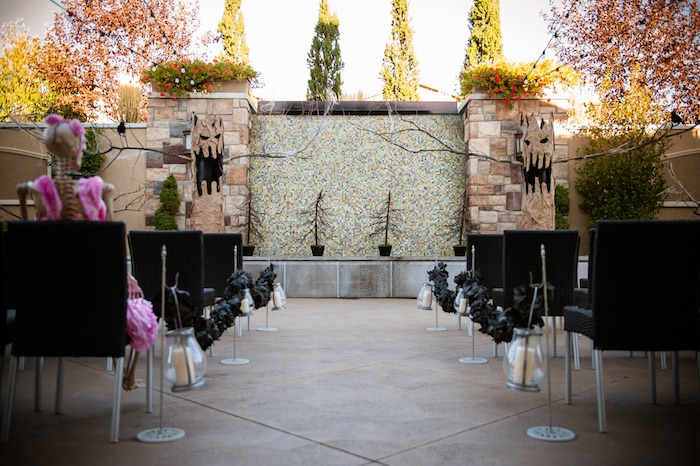 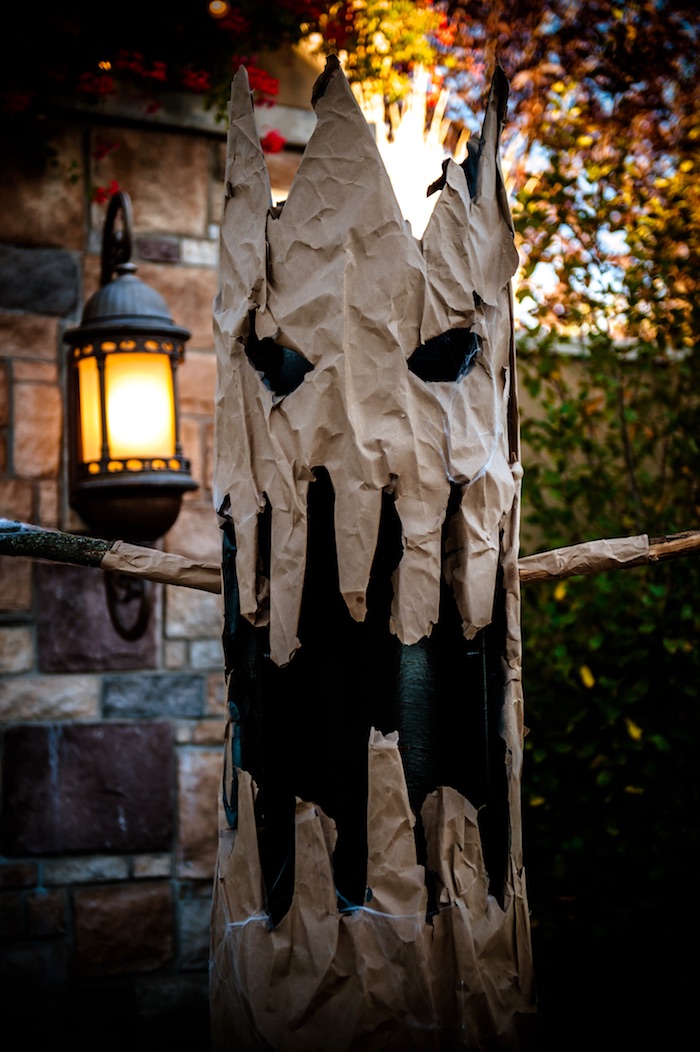 This is what Leslie shared about the event- “My husband and I throw a big Halloween party every year. But the October we celebrated our 10th wedding anniversary I knew that I wanted to do a vow renewal but didn’t want to forgo our annual Halloween party. So, I joined them together as one! Our theme was Corpse Bride! We had all our guests come in costume. We even asked our photographer and catering staff to come in costume as well!

My husband and I took our attire cues from the movie Corpse Bride. We found these incredible Victorian costumes. A seamstress made a few adjustments so they had a bit more customization than a regular costume. Our 16 month old daughter was a fallen angel. She was led down the aisle, dropping silver roses petals out of a pumpkin basket along the way, by her devil. Our officiant was a skeleton.

We spent months making all the centerpieces, props and every tree. Including all 4 of the 8 foot “haunted trees”! We used bags and bags of moss and spray painted cobwebs to create a more realistic color to all the trees and centerpieces. The centerpieces were vibrant blues and purple silk flowers. We gave a them dusting of black spray paint to give them a wilting effect.

The favors were the plastic skull tumblers and these amazing bat favor boxes filled to the brim with taffy and sixlets in our color scheme of purple, icy blue and silver. Before the ceremony we had our guests mingle while snacking on bruschetta, meatballs and stuffed mushrooms while fog covered the outdoor patio creating an eerie atmosphere. We timed the beginning of the ceremony right after the sun set so it was all lit by candlelight, fire warmers and the fire that was on top of the waterfall we used as our backdrop for the ceremony.

After the ceremony our dearly departed guests came into the ballroom where they found their seats at tables named after deadly love affairs like Frankenstein’s Monster & Bride or Beetlejuice & Lydia. We offered multiple soups and salads with warm artisan bread that they could choose from. While all were eating they submitted their votes for the best costume of the night. We played Halloween trivia games we had created and announced the 1st, 2nd, and 3rd place winners of the costume contest. Right after we awarded prizes we cut the cake and ate various flavors of cupcakes and petit fours like red velvet, chocolate, vanilla and of course pumpkin spice! We ended the night with dancing and visiting with our ghostly guests”!