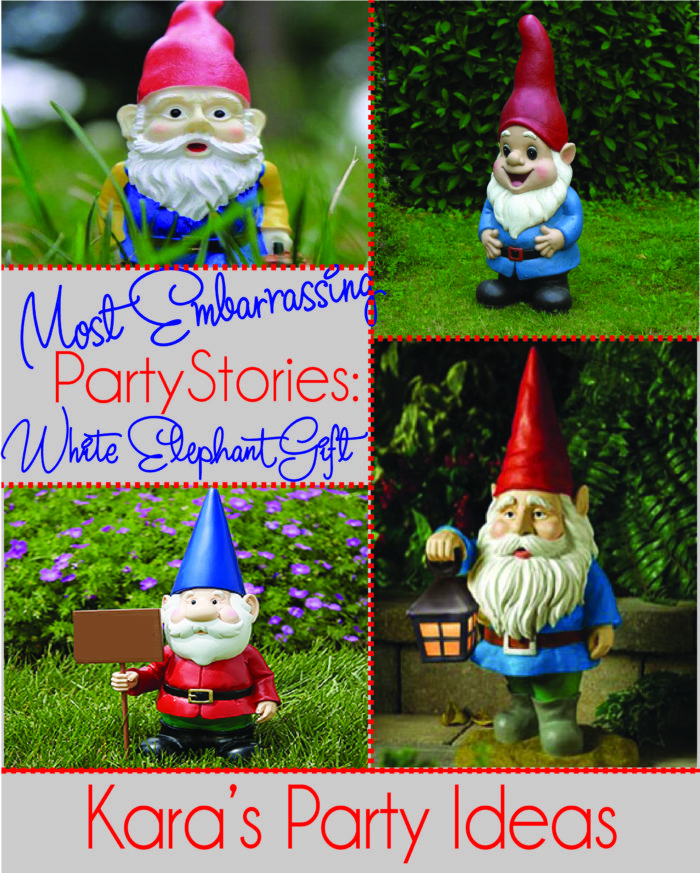 This story was written and submitted by one of our readers, Sarah Holley! Thanks Sarah!

My neighborhood Christmas party was coming up, and, like every year, we were going to do a white elephant gift exchange. Now, the gift exchange is a big deal in my neighborhood – it’s the whole reason people come to the party. People spend weeks preparing silly, amusing presents. I knew that I had to find the perfect gift. Typically, I might have a few ideas, but this year, I didn’t have a clue what I was going to give. As the date approached, and I still had nothing, and a sense of panic set in.

Finally, I resolved to go the store and just choose something. It might not be perfect. It might not be what I had hoped, or live up to the standards I had come to expect from my neighbors, but it would be better than nothing.

With this in mind, I got in my car and set out. I live in a place with more fields than people, and it was when passing one of these that I saw it. The perfect gift, just waiting for me to find it.

I pulled over to investigate. It was a lumpy, weathered garden gnome, coated in dirt, with a cracked nose. About a foot tall, with a pointed hat. It was beautiful. Aside from the crack in his nose, and the grime, he seemed to be in good condition. I figured that after a little cleaning and care, he’d be good as new.

I took him home, abandoning my trip to the store. It didn’t take me long to clean him, wiping away layers of dirt to reveal bright reds and blues. His brows were furrowed in a small frown. I cut a piece of cloth and tied it around his neck, making a scarf. With him finally being presentable, I wrapped him up and put a bow on the box, satisfied that my task was complete.

Then came the day of the party. I had told a few friends that I had the perfect gift, and they were excited to see it. I was excited to show it.

The party was lovely. With good friends, good food, and good music, it had the atmosphere of familiarity and warmth. We ate and talked, played a few games, and talked some more. At last, the time came for the main event.

We gathered in a circle, each putting our gifts in the center. The first few rounds went well, with lots of laughter as gifts were opened. There were books and games, trinkets and toys. I myself won a cheese slicer shaped like a reindeer. Then, the moment I had waited for. Across the circle, a man was about to open my gift and find the gnome, whom I had lovingly named Gregor.

He was pulled from his box and quickly received several chuckles. I tried, unsuccessfully, to hide my grin.

“Whoever brought this wins the night,” the man said, and I felt a thrill of triumph. “What am I going to do with him? He’s hideous! Who’d want an ugly old gnome?”

We chuckled again and prepared to move to the next gift when a voice stopped us.

We turned to look. The speaker, a woman named Mrs. Cartwright, sitting a few places away from the man and the gnome, peered more closely at it.

“It’s mine. It’s been missing for two months! Let me see it,” she added, reaching over to take it. The gnome was passed and flipped over, revealing initials on his base.

“See?” the woman said, pointing. “And he’s got a crack in his nose, from when I dropped him. He was a birthday gift from my mother.”

It was quiet. We all sat waiting to see what would happen next.

The rest of the night went on without a hitch. The gnome was back in possession of its rightful owner, and all was well.

“You stole a gnome? That gift was so perfect, I knew it had to be yours. I just never imagined you’d steal from poor old Mrs. Cartwright.”

I turned and saw Jane, a good friend, standing close by.

“No!” I protested. “I found it in the field up by the highway. Plus, I had no idea anyone was missing it!”

She laughed. “If you say so. In any case, I can’t wait to see what you come up with next year!”

Do YOU have a good embarrassing, funny, or quirky party story to share? Let us know and we might just share it with our fellow party planning friends!