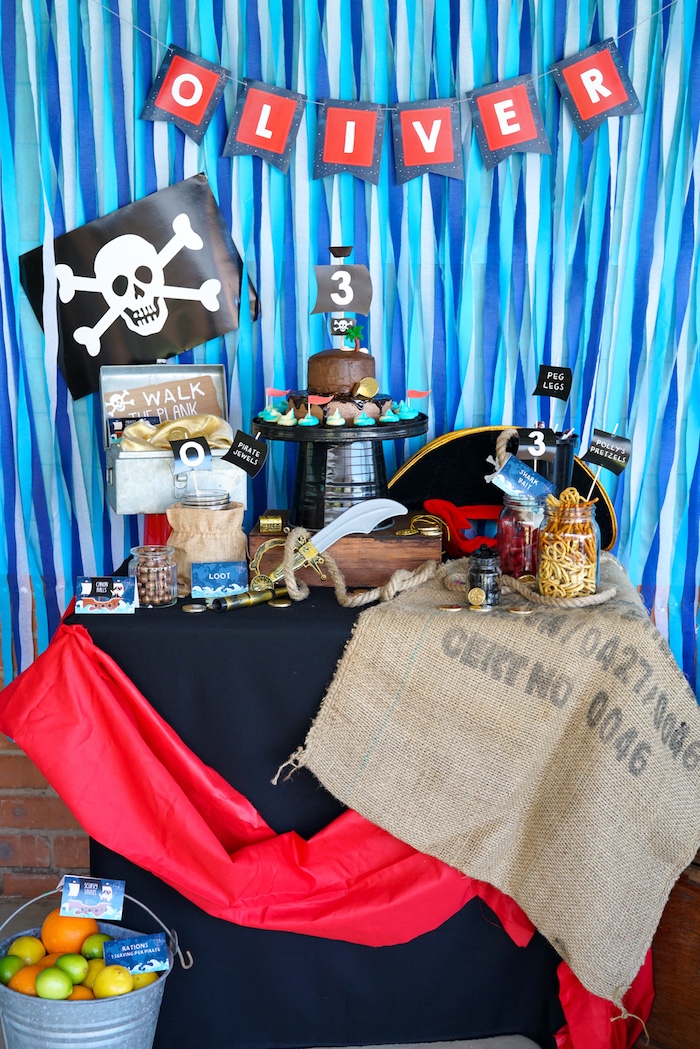 Calling all pirates o’er the land and sea, I’ve got a party full of loot and treasure for thee!

Styled by Louise Sanders of Sunshine Parties, out of Hillcrest, KwaZulu Natal, South Africa; this Classic Pirate Birthday Party is full of ARR-mazing details to pillage!

So grab your sword and come aboard and be sure to check out these favorite elements, which lie in store: 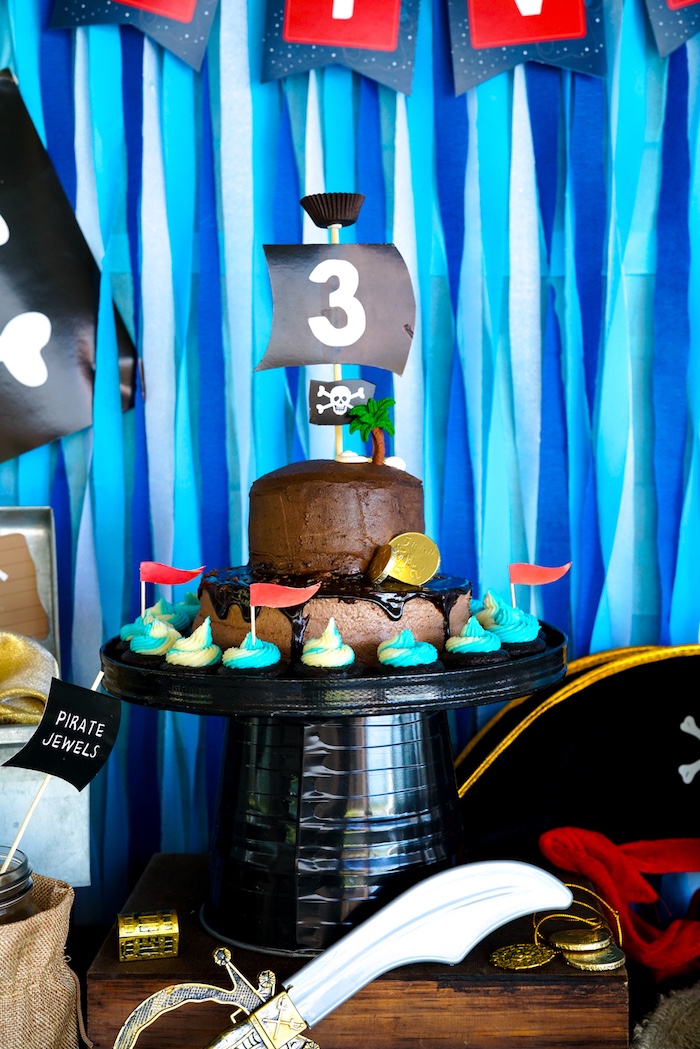 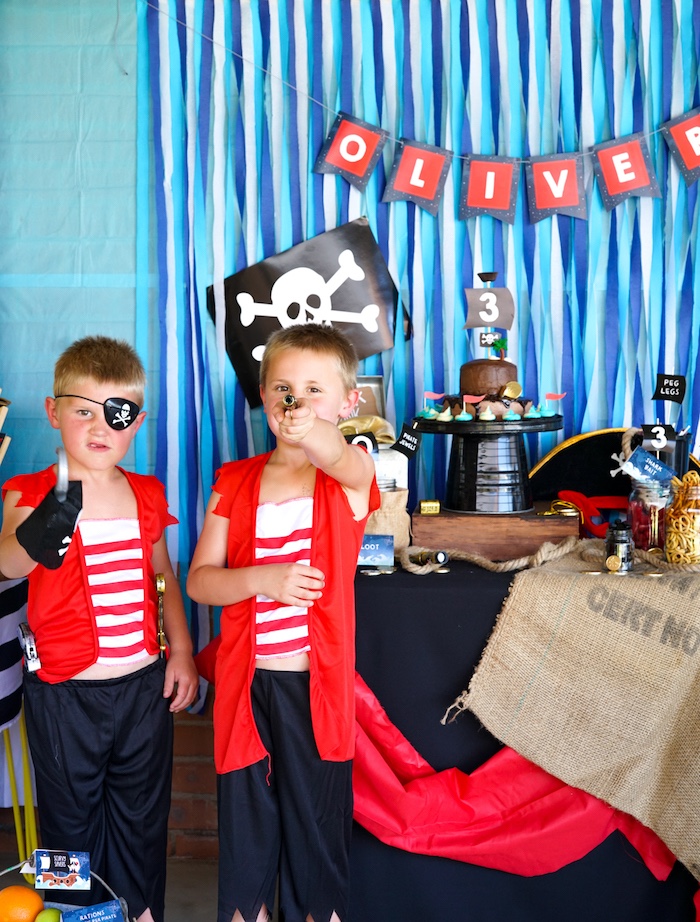 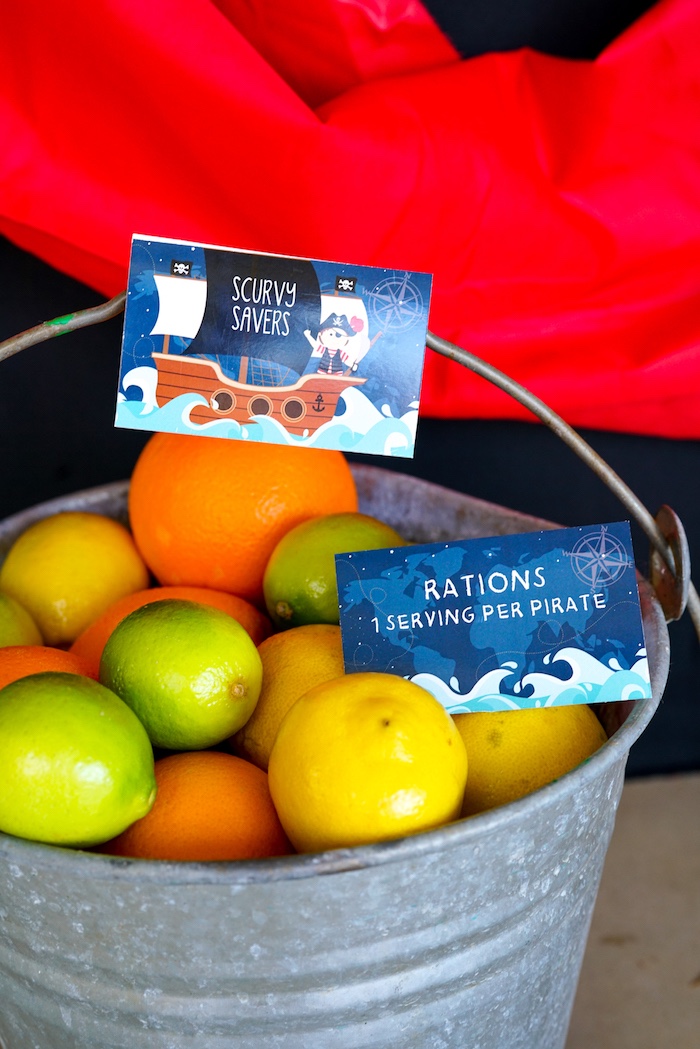 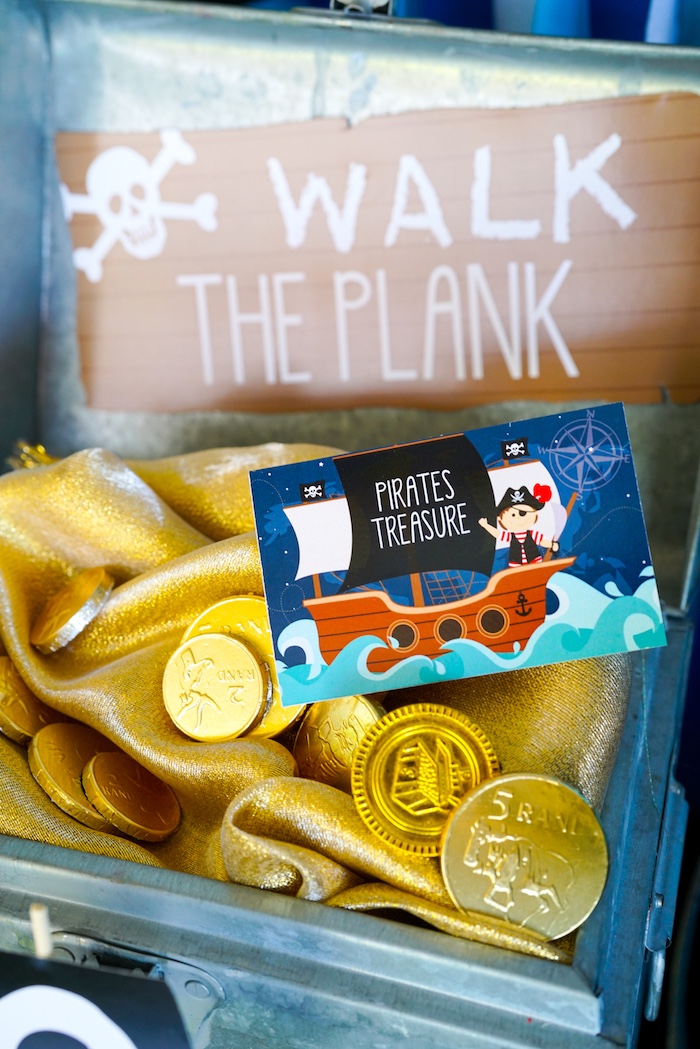 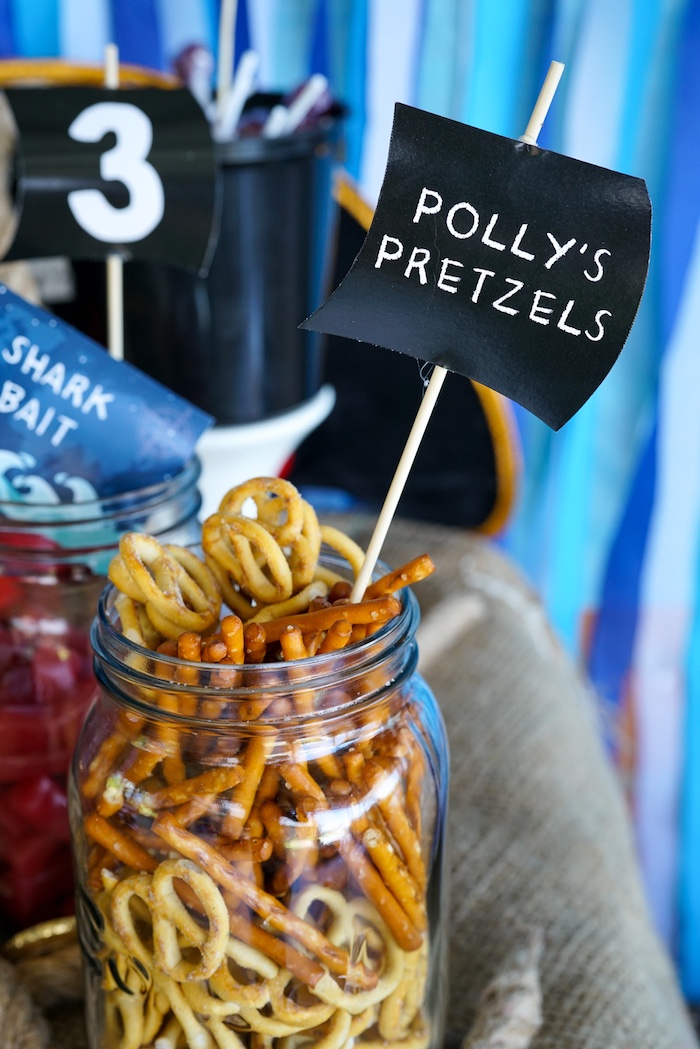 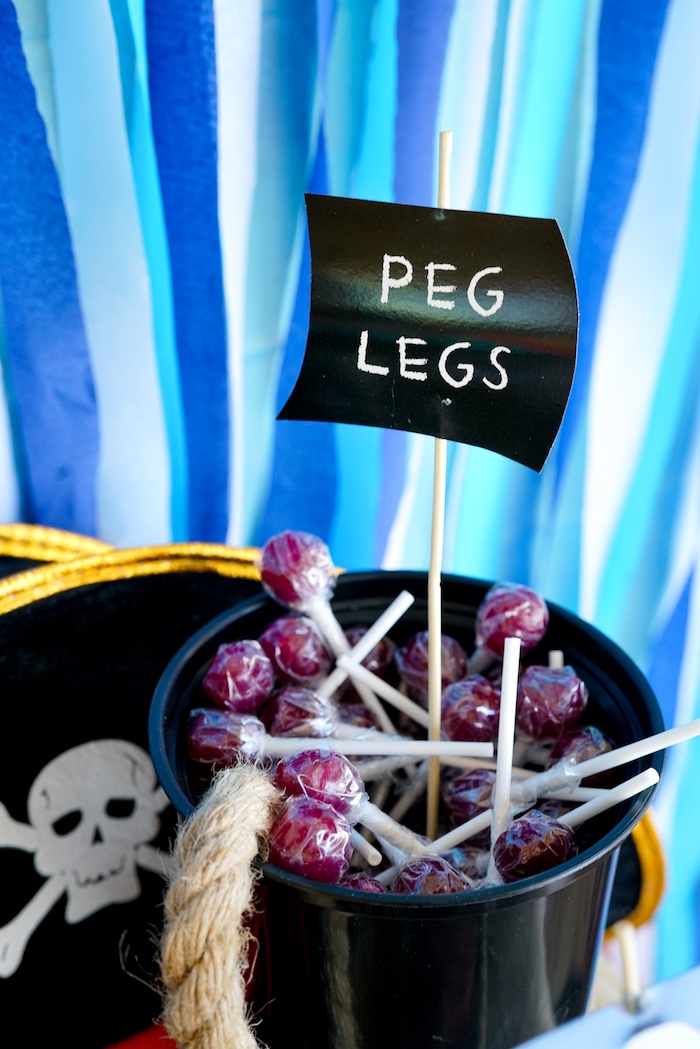 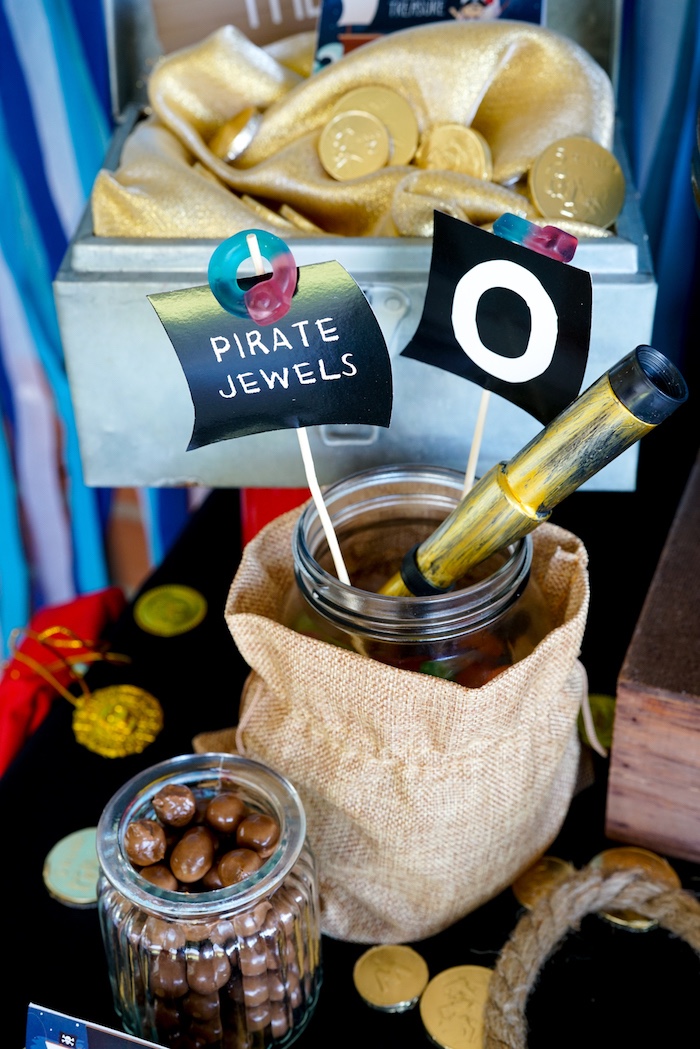 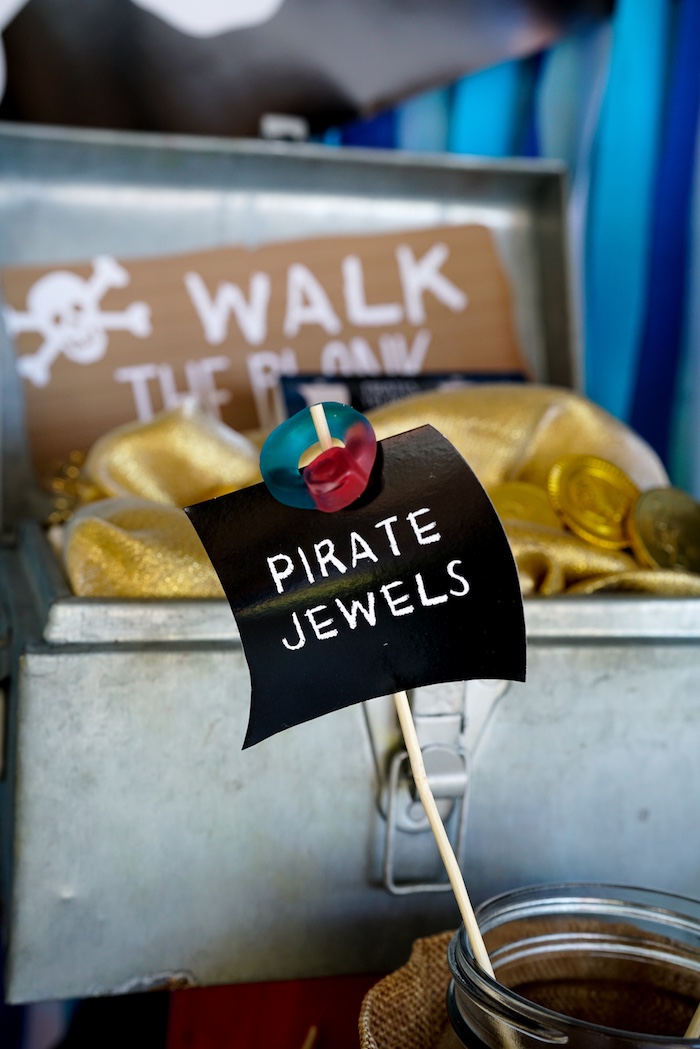 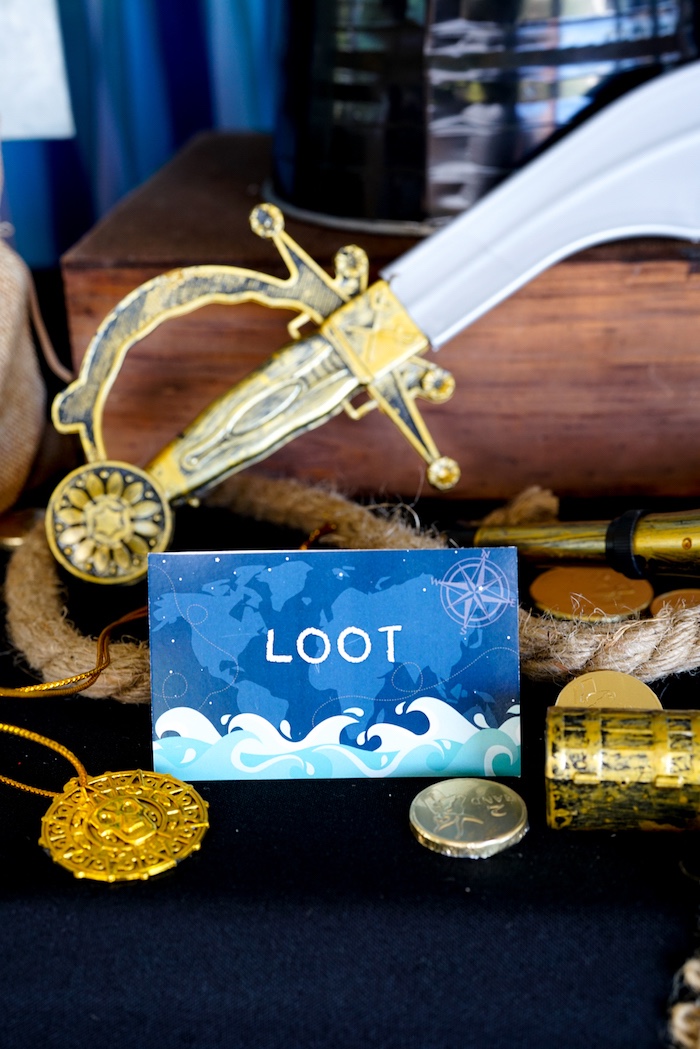 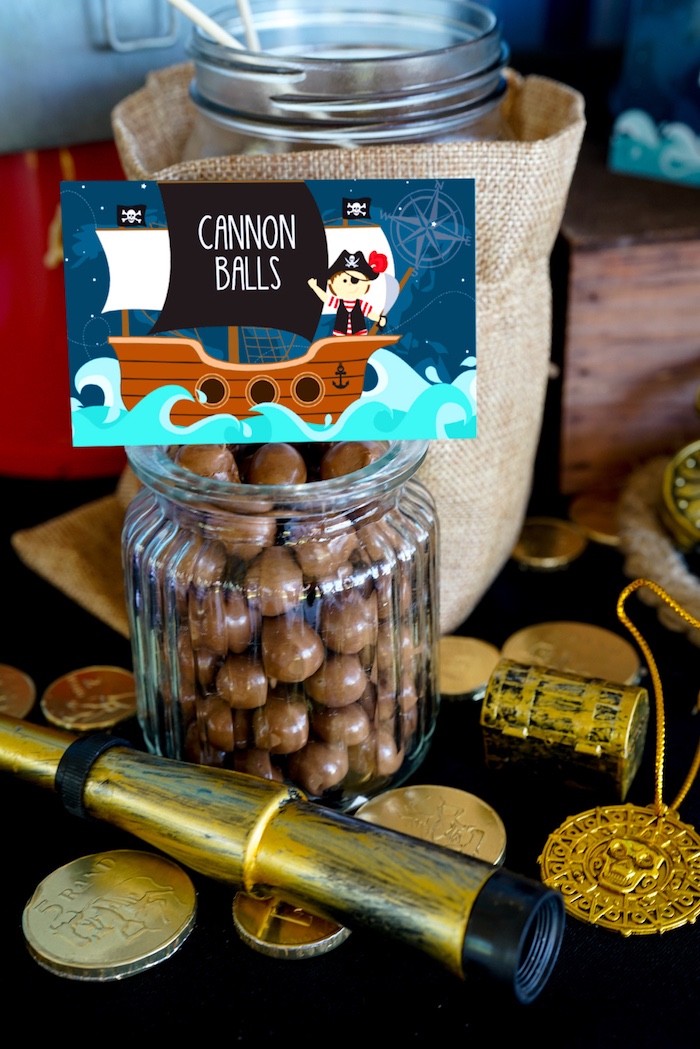 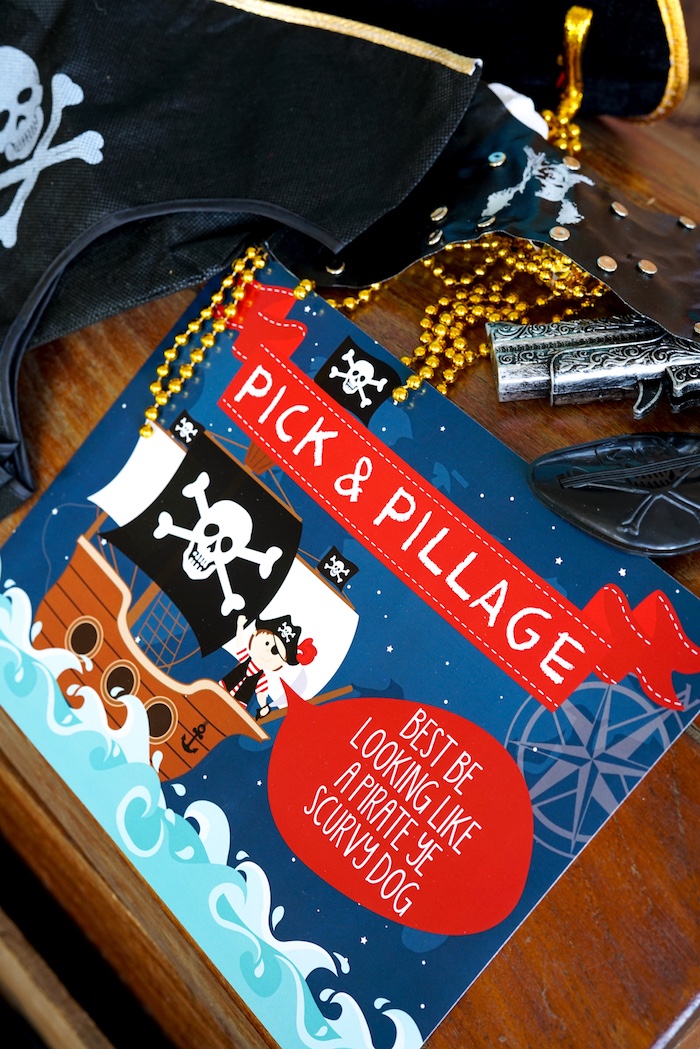 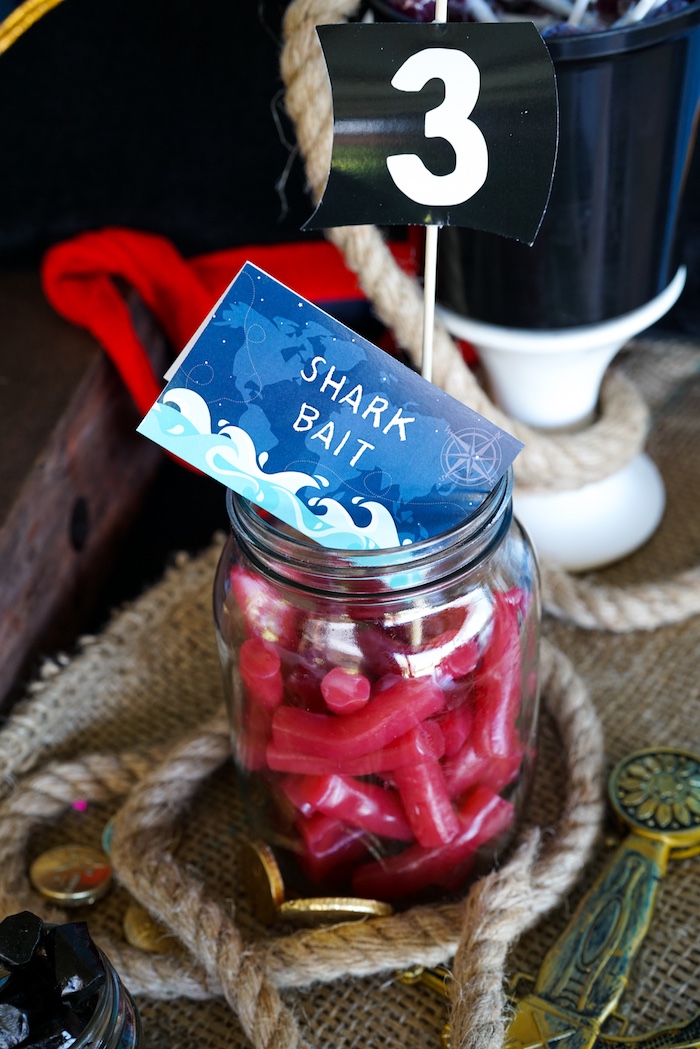 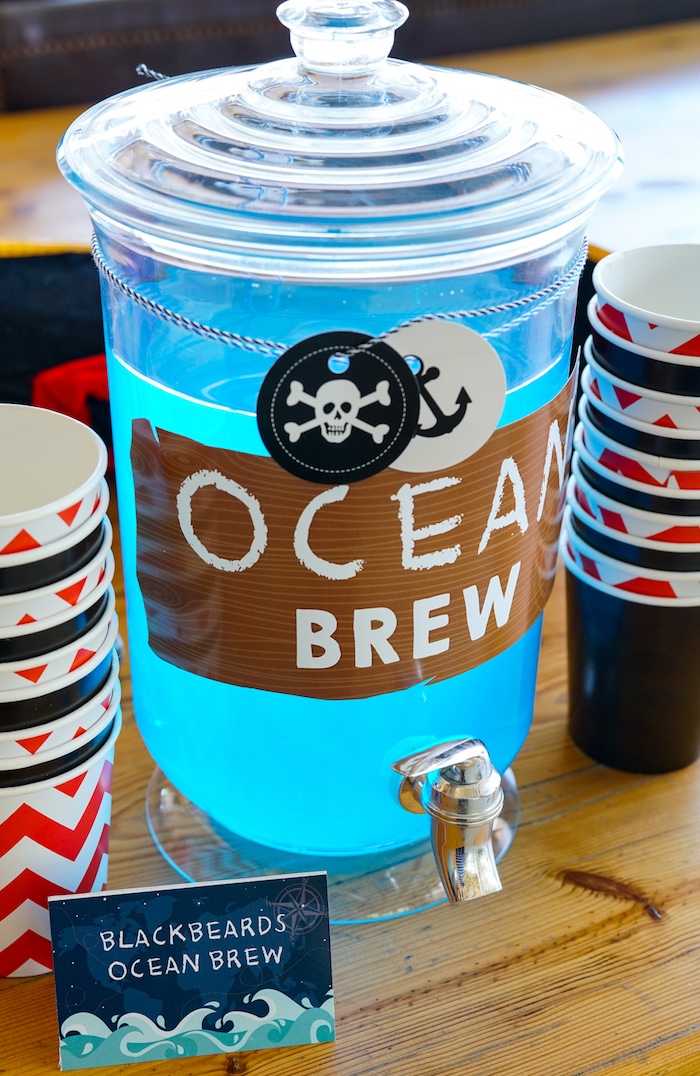 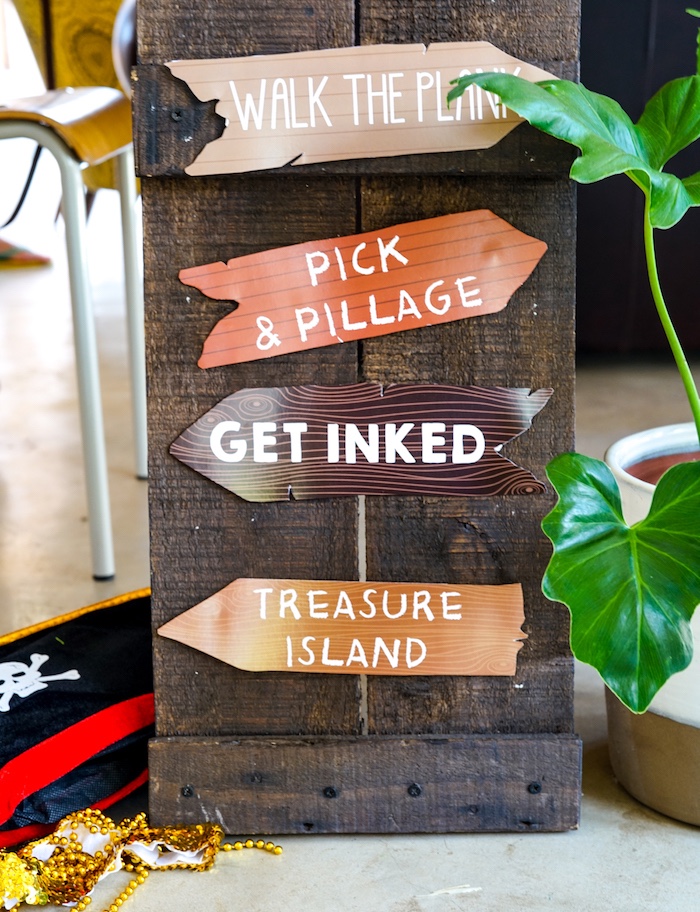 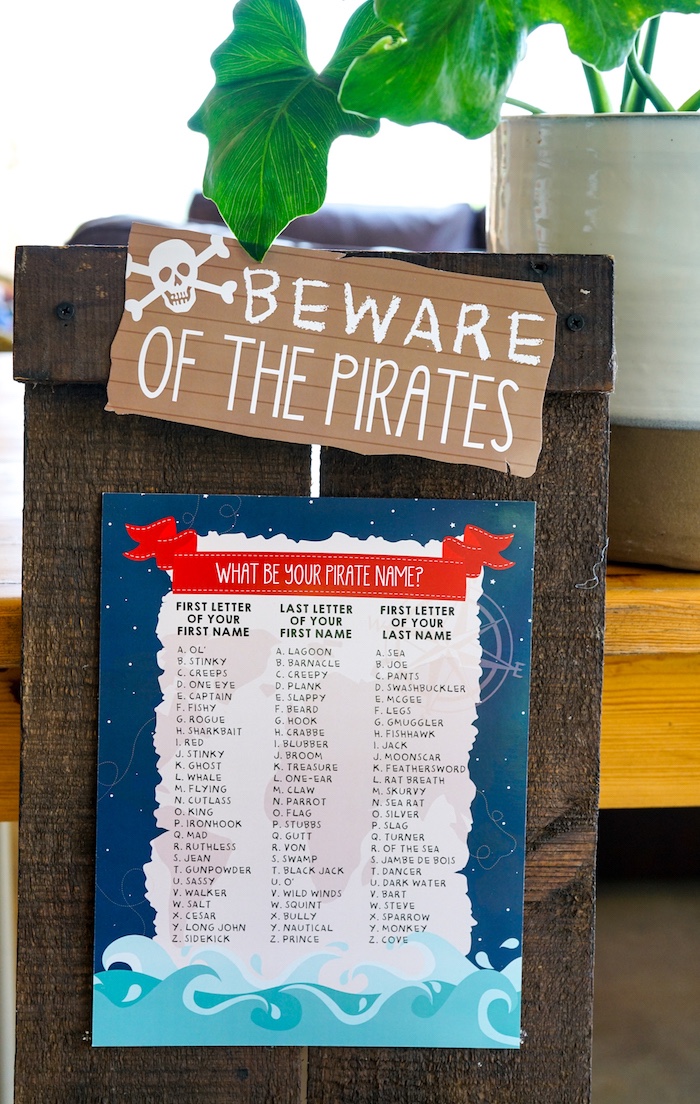 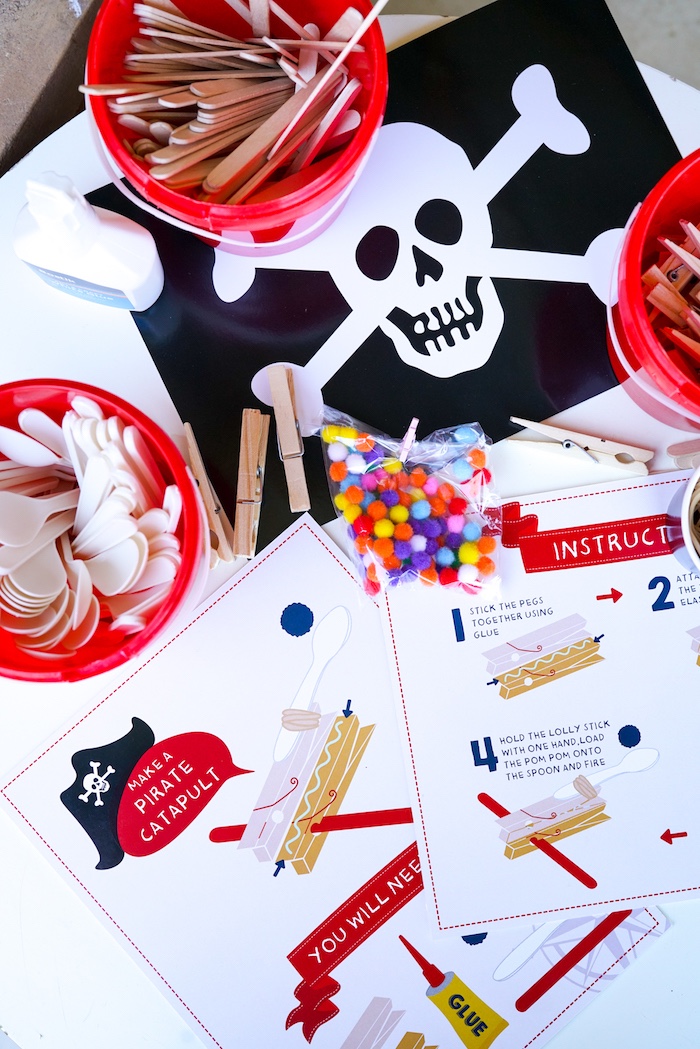 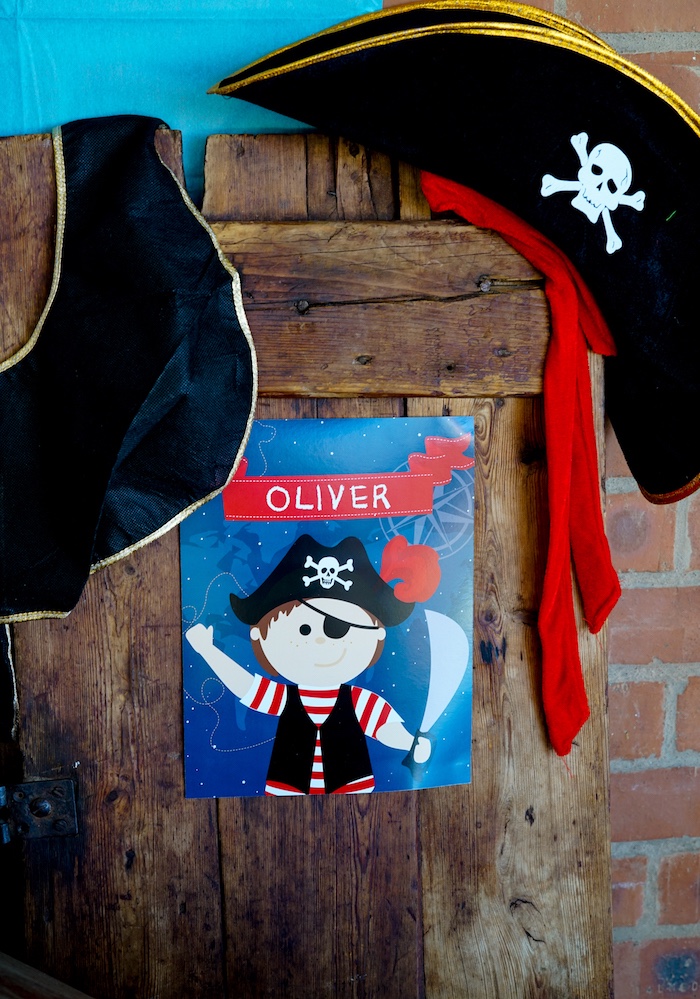 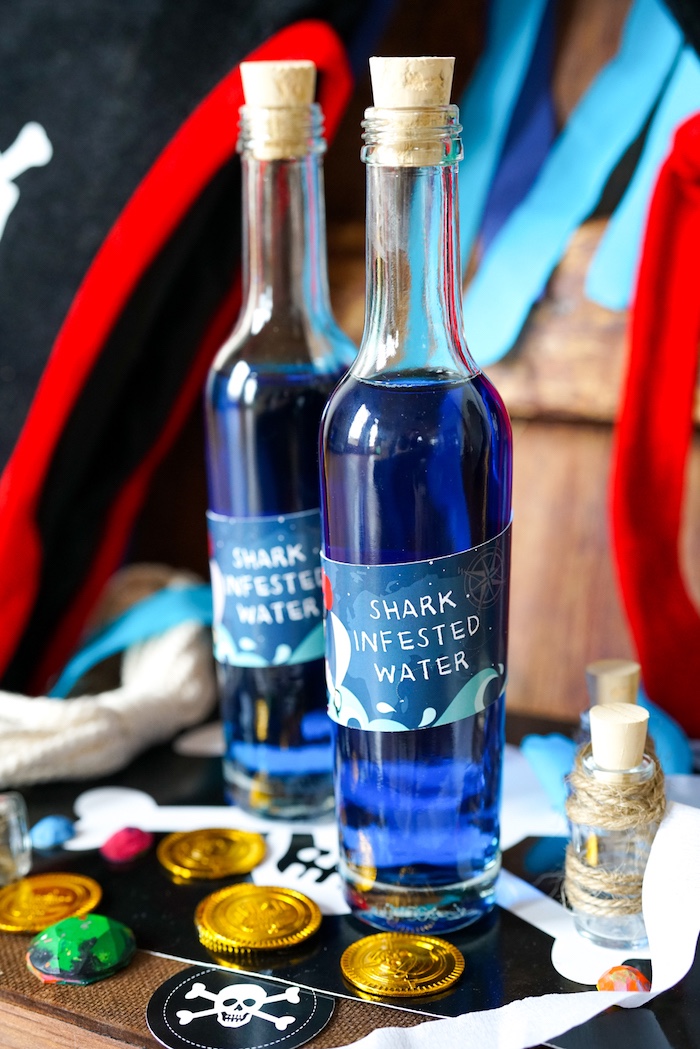 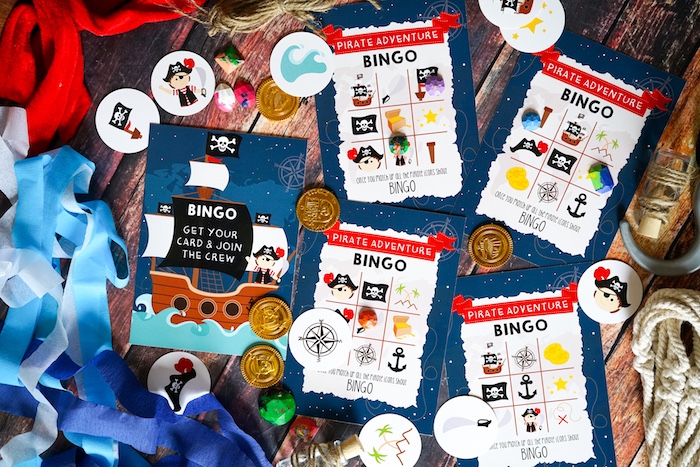 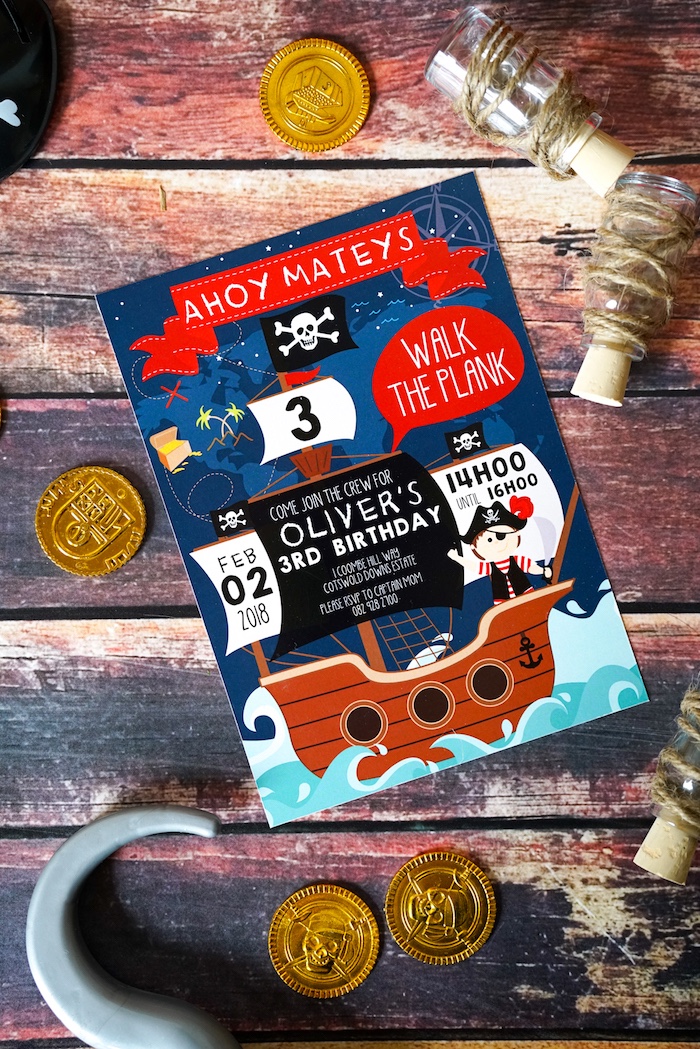 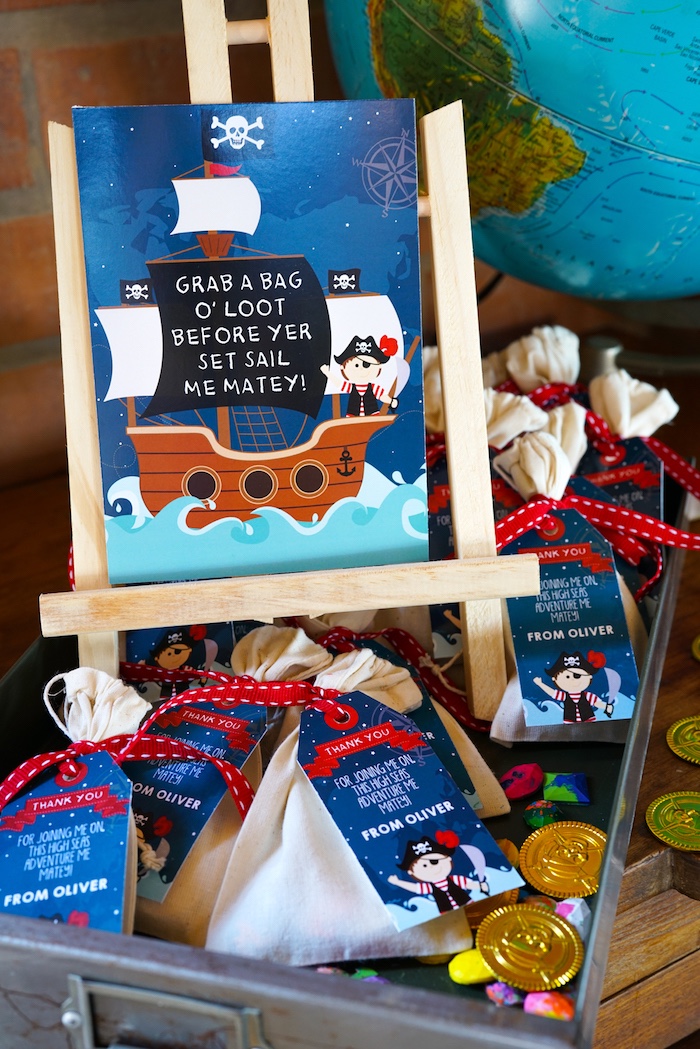 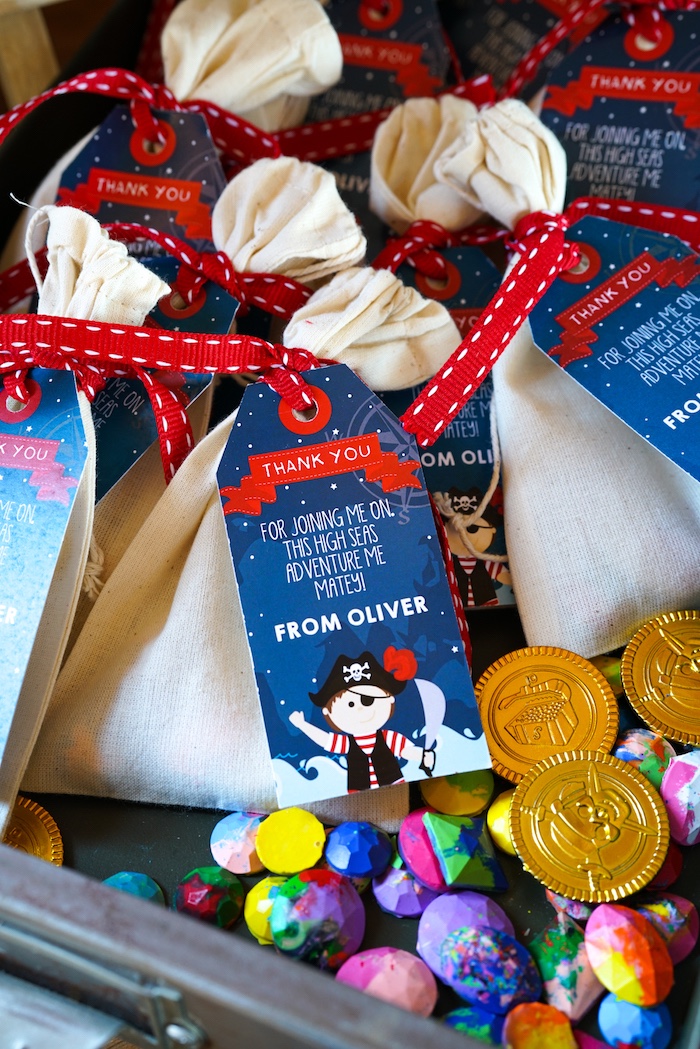 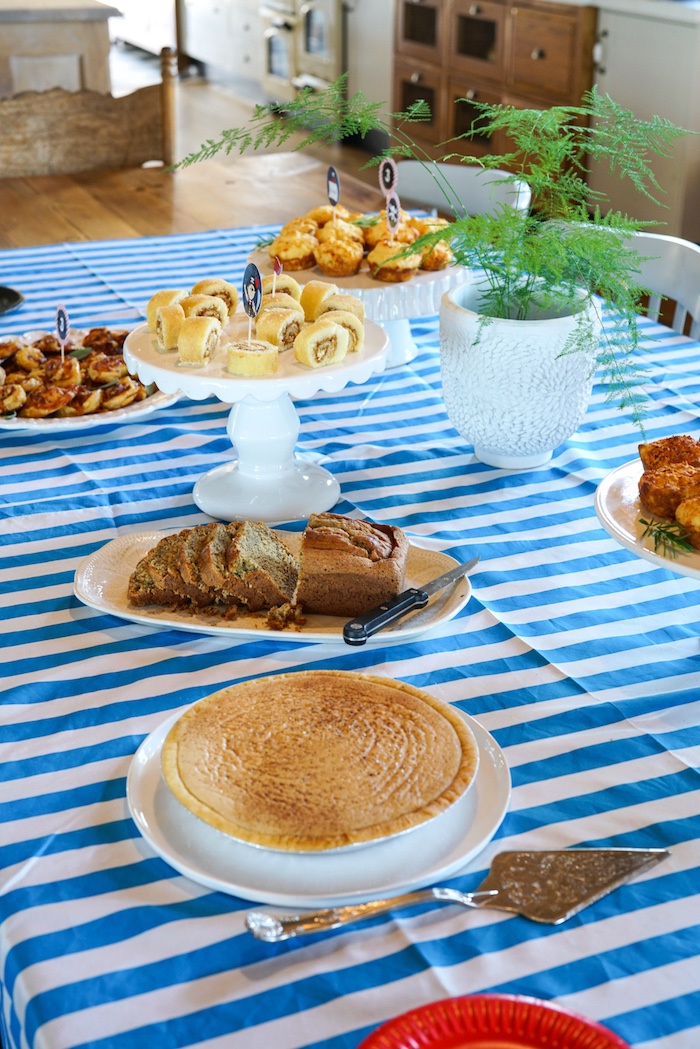 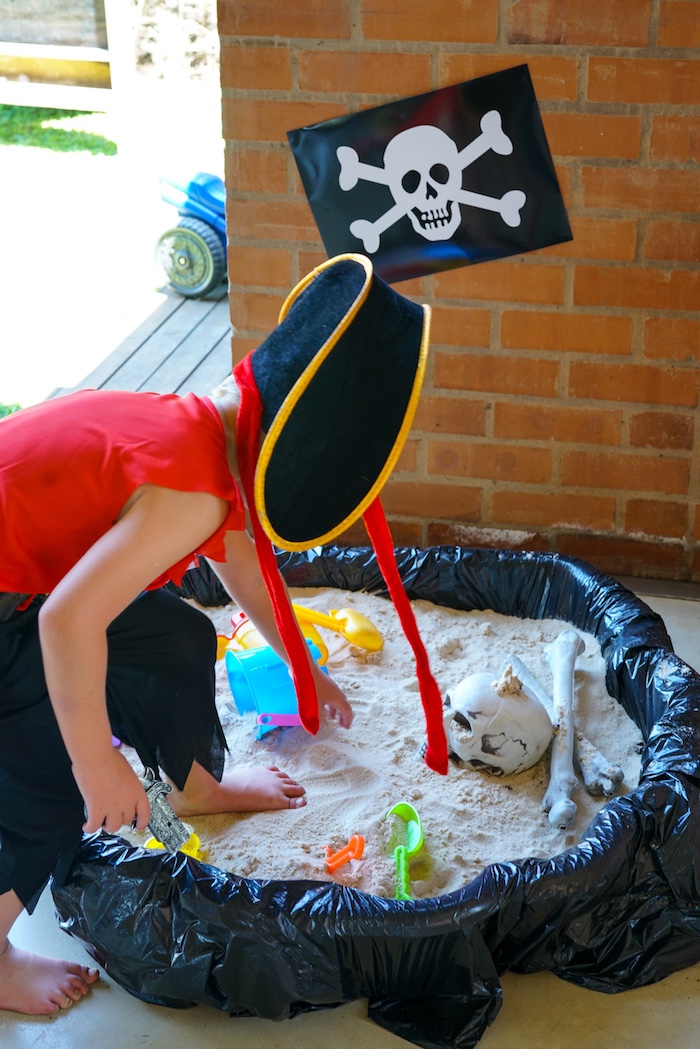 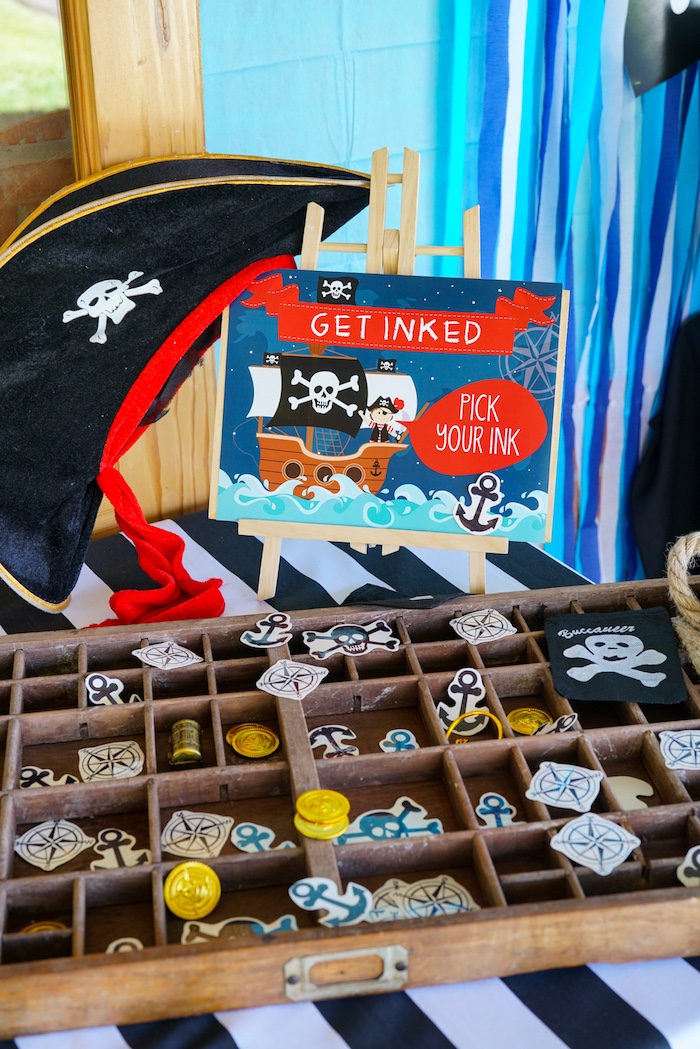 This is what Louise shared about the party- “Ahoy, me hearty!

Some party themes are so enduring – they never get tired. Classic example? PIRATE PARTY!
There is SOOOOO much you can do, it’s really easy to pull off effectively, and such a hit with the kids.
When my cheery little Ollie turned 3, we felt it was high time – for a pirate party! Bring on the dramatic colors, eye patches, bandanas, frayed pants, hooks and mustaches! Bring on the rolling R’s and funny pirate talk, bring on the treasure, bring on the ADVENTURE!

So, we created THIS swashbuckling pirate party set – it includes EVERYTHING you need for pirate party activities, food, drinks, cake and cupcake labelling and ideas, party decor and party signs.
Aye, it’s the main party table. Bold, bright, and none too tidy, ye hear? Using alternating royal blue, turquoise blue and white crepe streamers behind the table gave a great ocean effect. Some hessian, a Jolly Roger (that’s the skull and crossbones to you landlubbers), a cool party banner and props give just the right piratey effect. We used glass jars, tin, wood and various pirate props such as cutlass, gold coins, pirate hat and signage to add all the interest here.

What’s the first thing your mateys will need to do when they arrive? Get inked of course! Print these cool skull and crossbone, compass and anchor designs on tattoo paper, so the lads and lassies can get on with the party! The sign lets you know what you must do, and is editable, so you can change it to whatever your little pirate’s party plan is! Tip: we used this printer’s tray for the display, along with some haphazard gold coins thrown artfully about. The wooden texture and compartments worked well here, along with the sign, bold black & white stripe table runner and pirate hat.

OK, I suppose we need to feed these little Jack Tars and lasses….some food and drink ideas…..
The cake was a simple chocolate sponge base with chocolate buttercream and chocolate sauce drip, topped with a smaller iced choc cake and surrounded by choc cupcakes with blue and white ‘ocean’ piped buttercream. Putting it on a raised stand, and including some flag, coins, a palm tree and props made it look proper piratey! PS – the pirate party set includes an awesome pirate ship topper, ocean cake wrapper and 4 different types of round cupcake toppers (editable) PLUS these cool Jolly Roger flag toppers.
Harrrrr! What be YOUR pirate name?
Throw together some pirate props in a box – patches, hats, bandanas, hand hooks, a toy parrot…you get the idea…and use this sign. Now your mates have a pirate name, they’ve been inked, they’ll need a real Mc Coy pirate look too.
All that time out at sea, and sometimes you’re in the doldrums, yer need some entertaining! You can make a pirate catapult (all printables supplied) or play a jolly ol’ game of bingo!
With all these activities, some pirates might not be savvy as to where it’s all at. So, some signage will help them along with their passage!
And look at Cap’n Ollie’s face as his mates sang a sea shanty (ok, Happy Birthday) to him! Awwwwww….
And when the ol’ lady or the ol’ man (parents) say it’s time to set sail, no one leaves empty handed! We did jewel shaped wax crayons (treasure, of course) made by melting old crayons and setting them in a silicon jewel mold we found! Along with some choc gold coins. Make sure there’s enough for everyone, or there will be mutiny in the ranks!

I have to tell you, the Pirate Party Set is an absolute treasure! Packed full of 43 different party printables, it’s wise to order it now!

Arrrrrrrrrr, there is another party coming soon, so I’ll be off, all hands on deck….” 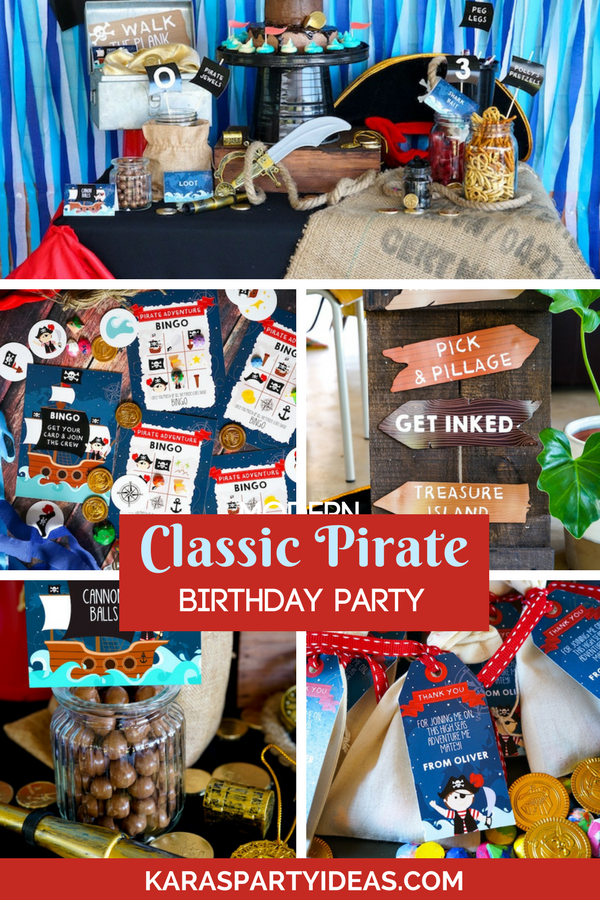