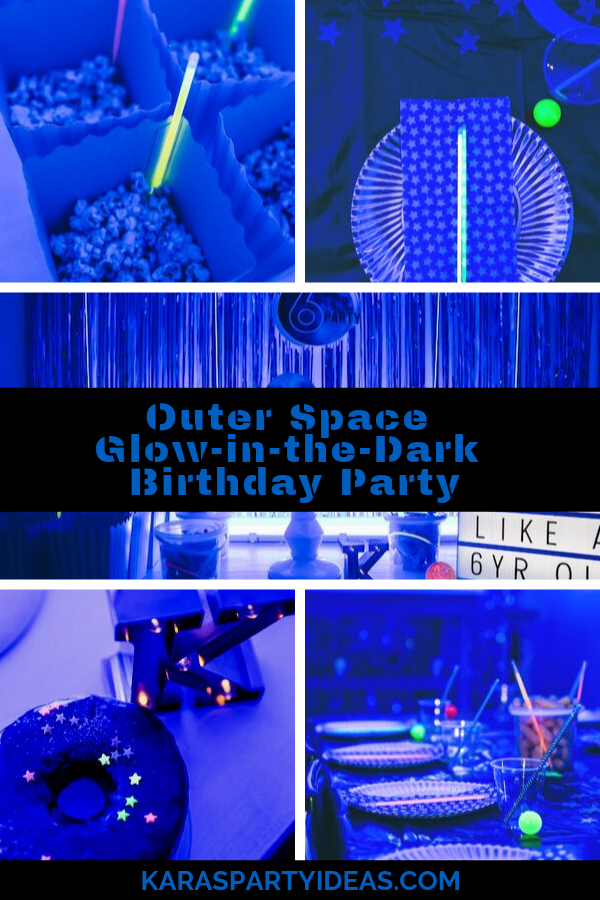 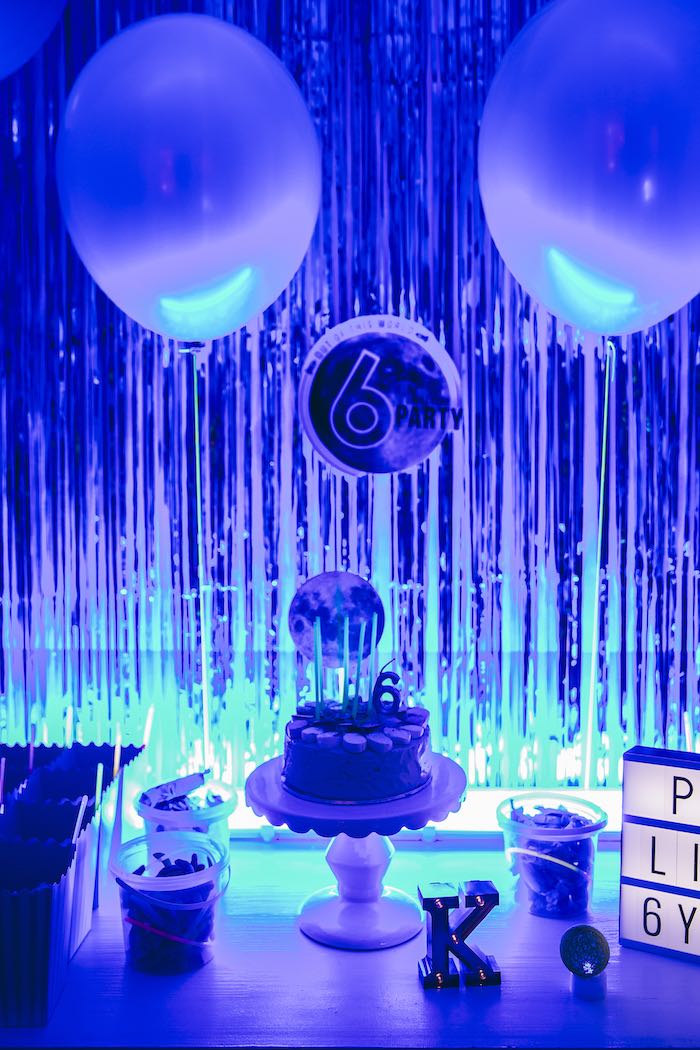 This Outer Space Glow-in-the-Dark Birthday Party by Karen Kelly of Loveilee, out of, Johannesburg, South Africa has such a cool vibe!

Featuring fabulous space themed sweets and awesome glow in the dark decor, this sixth celebration is a space adventure to the core!

So blast off and be be sure to soar above, all of these amazing details, that I just love: 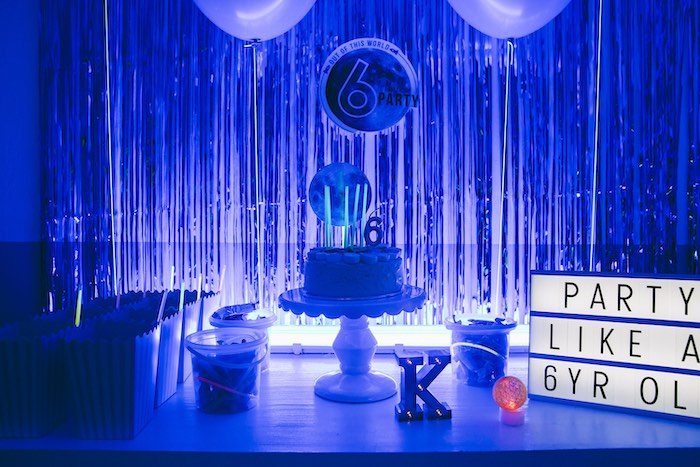 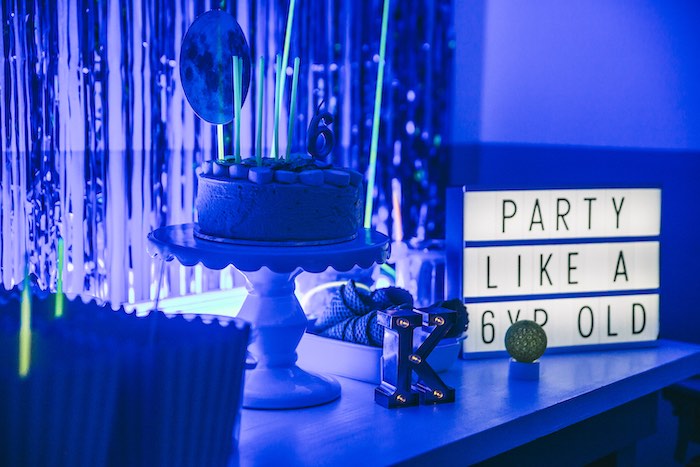 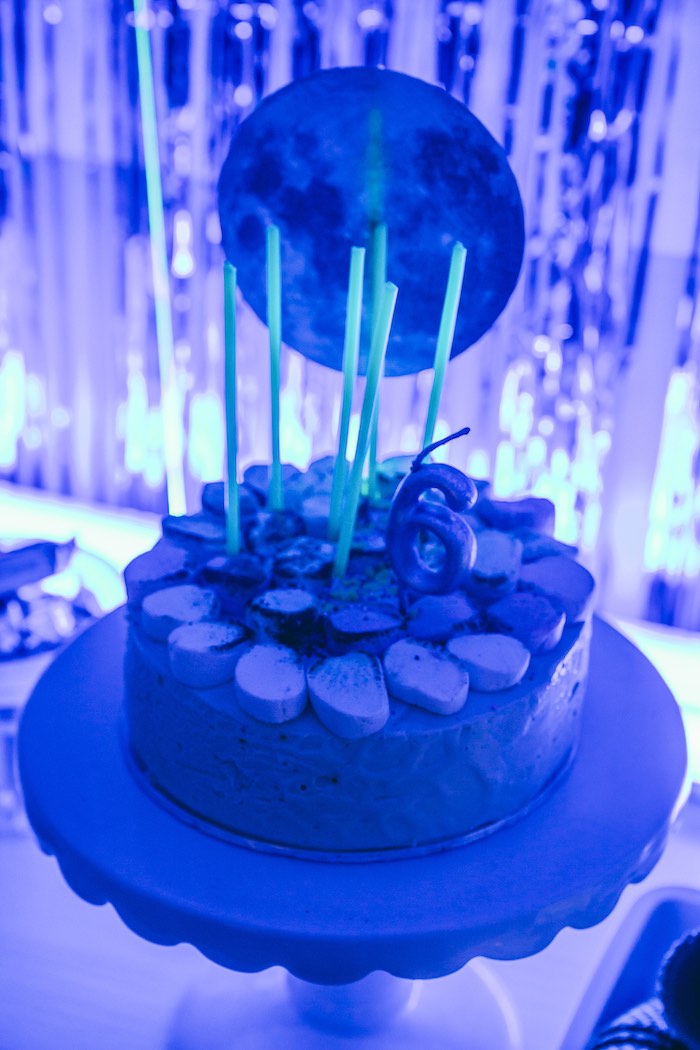 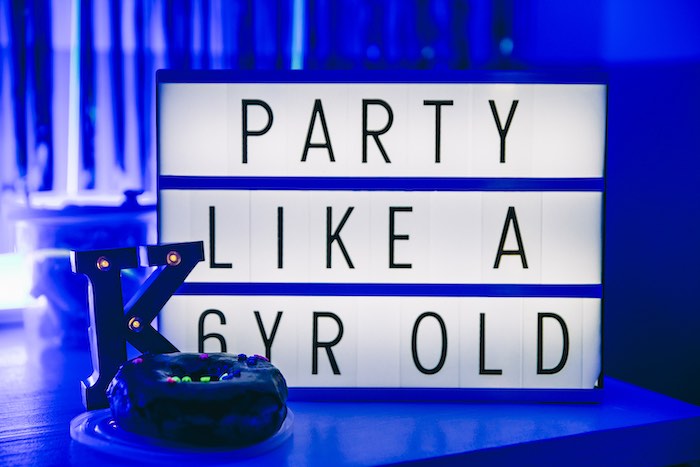 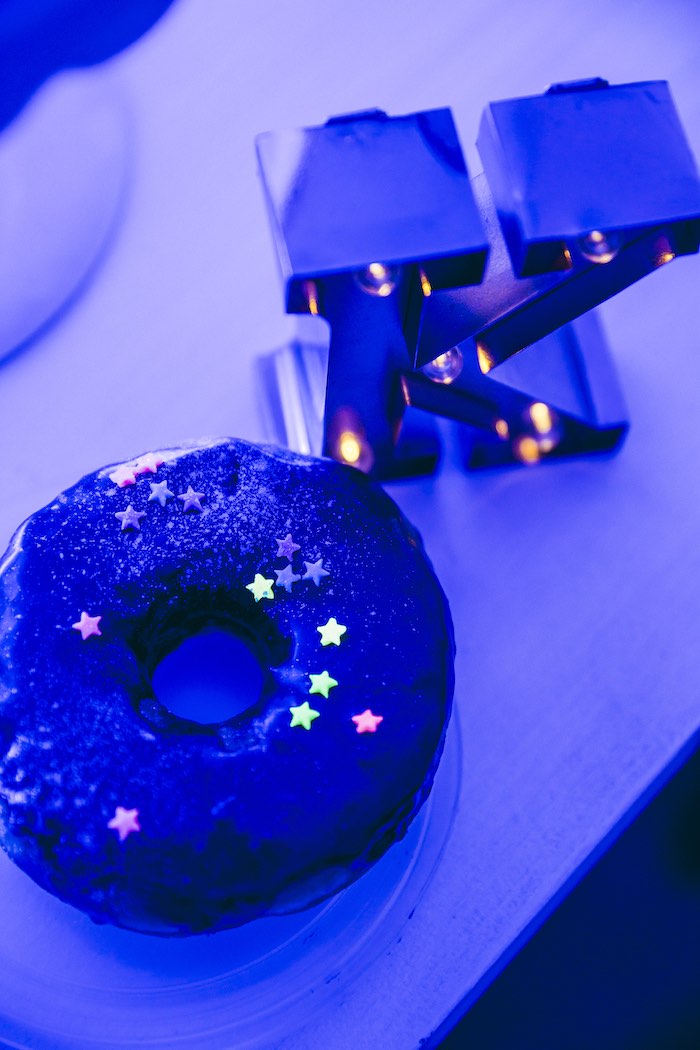 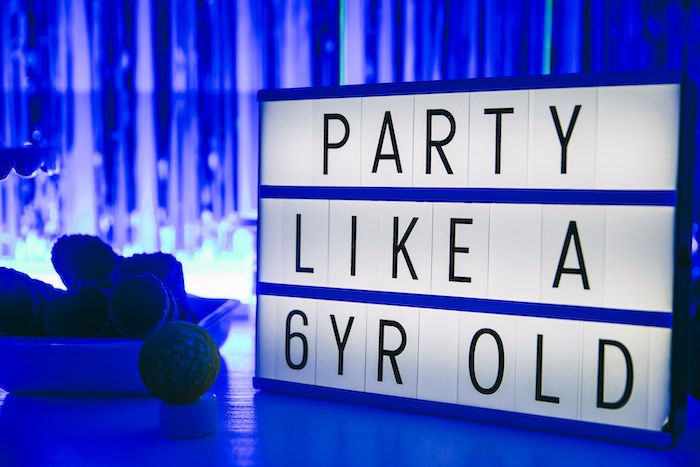 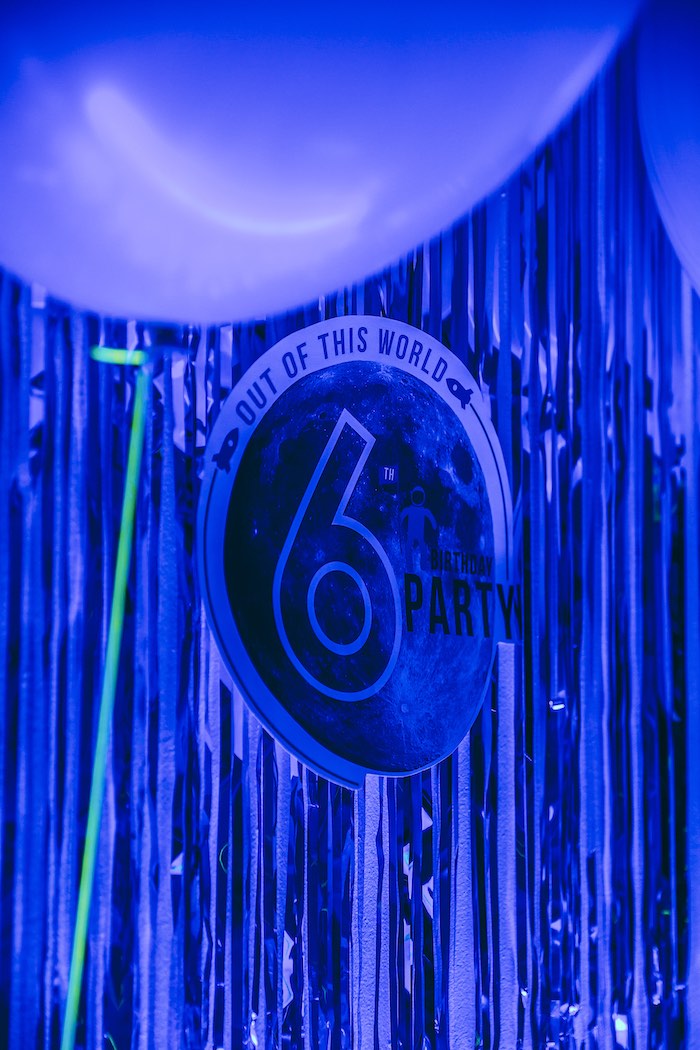 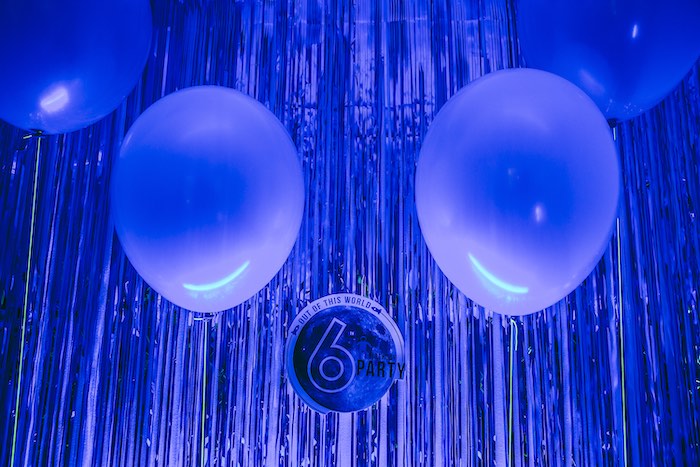 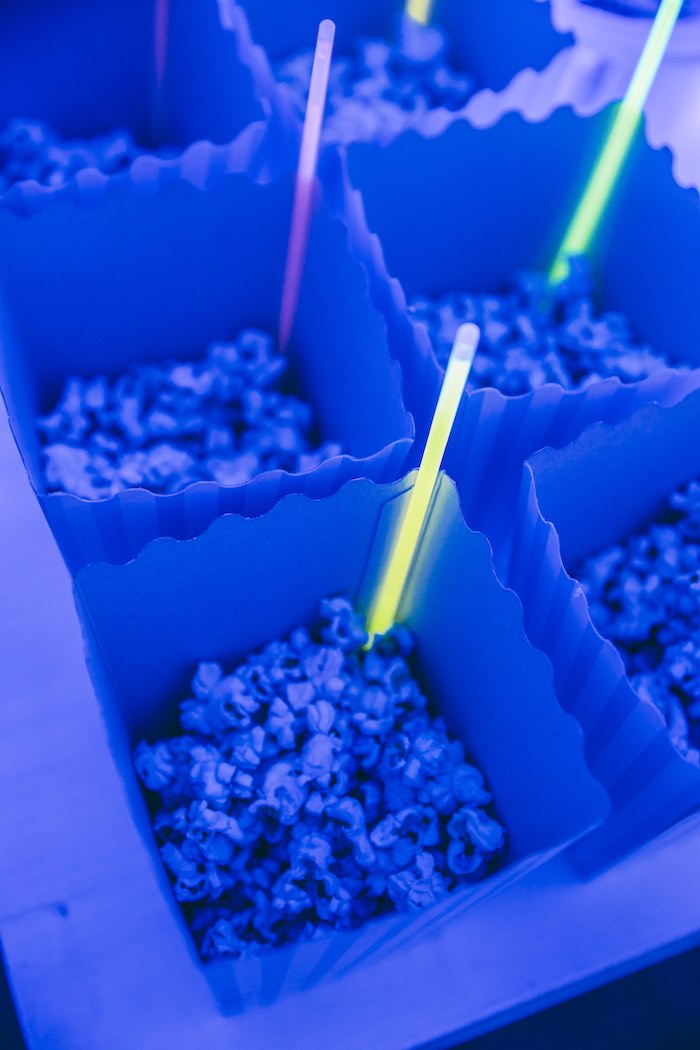 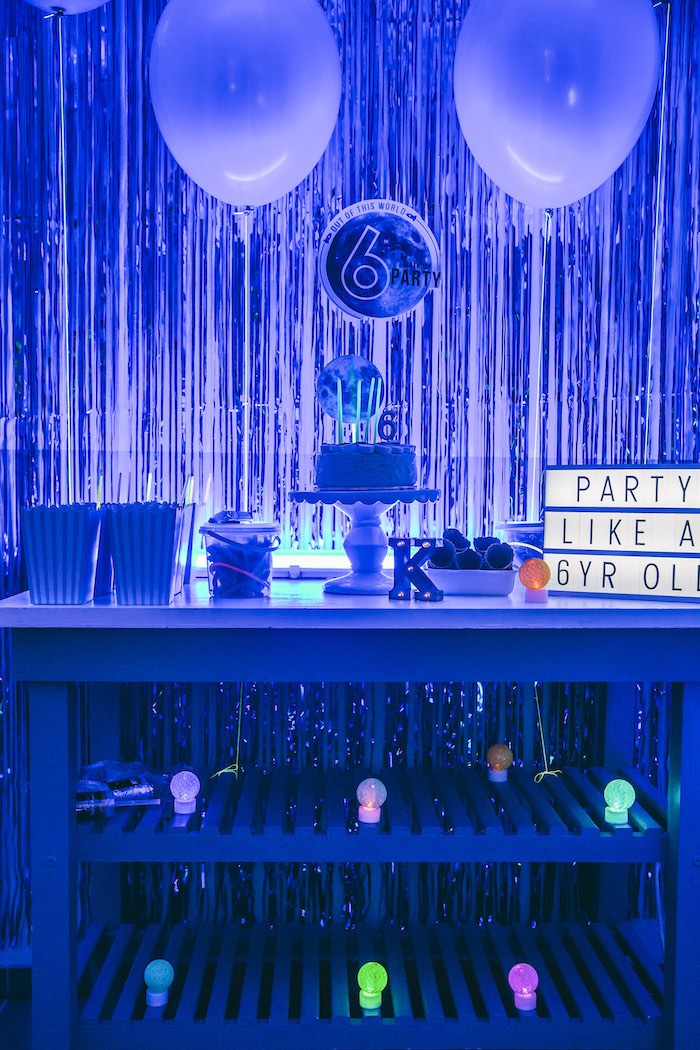 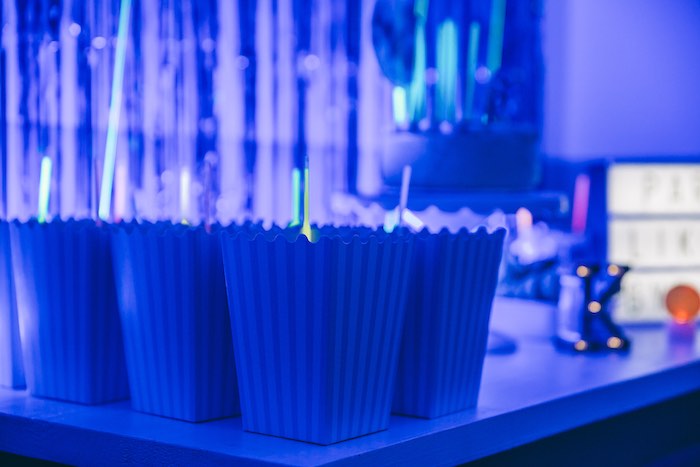 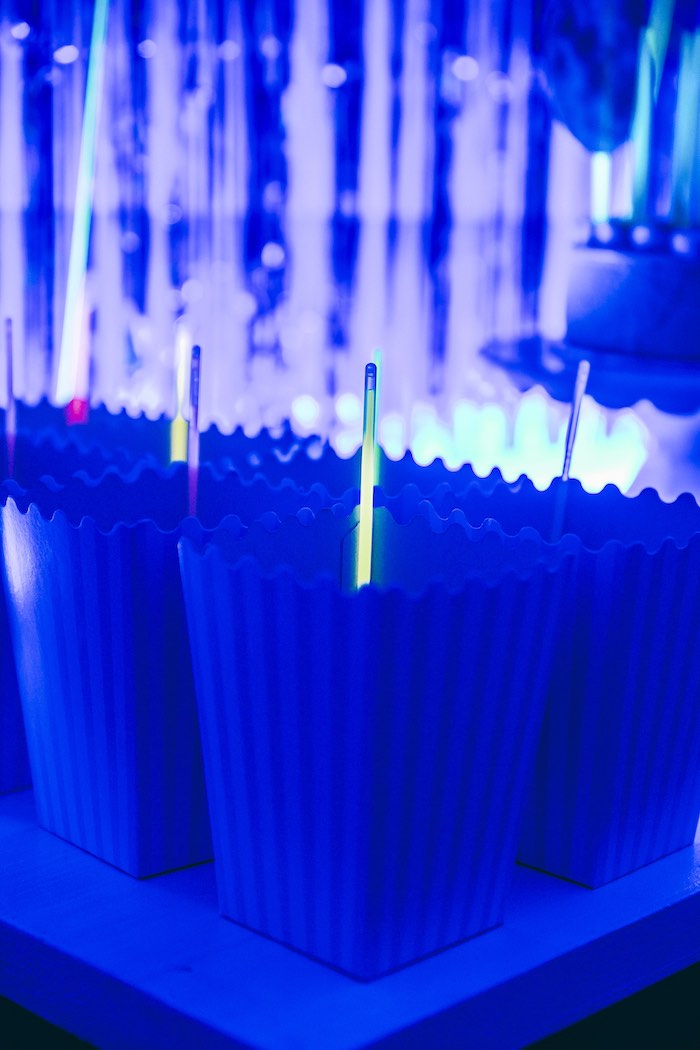 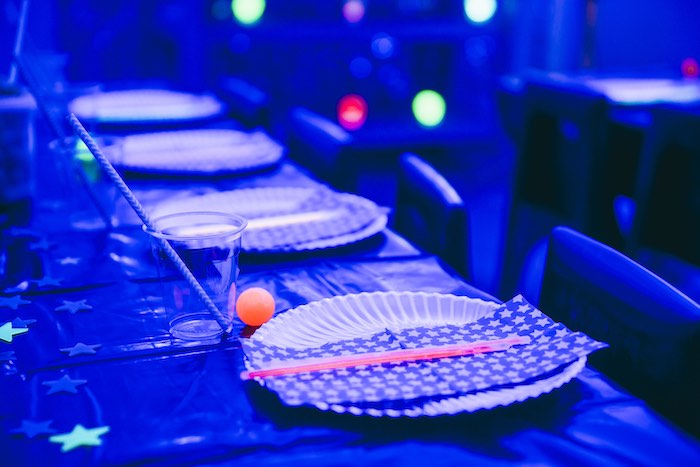 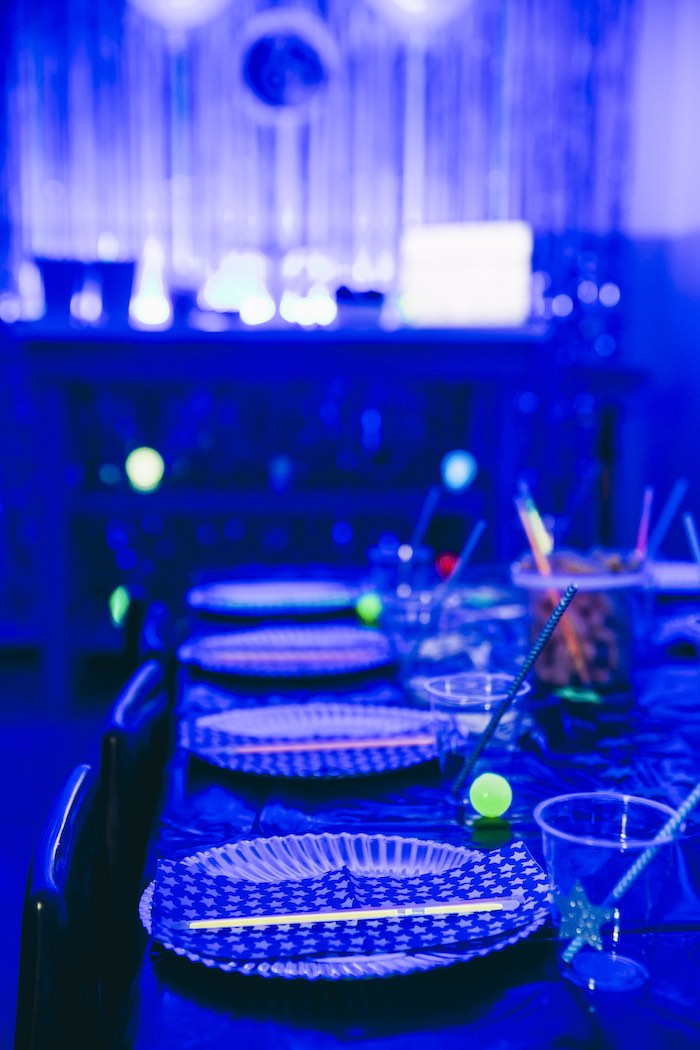 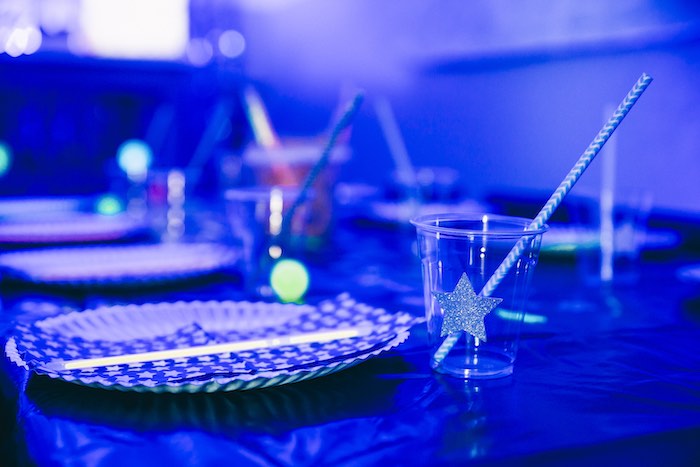 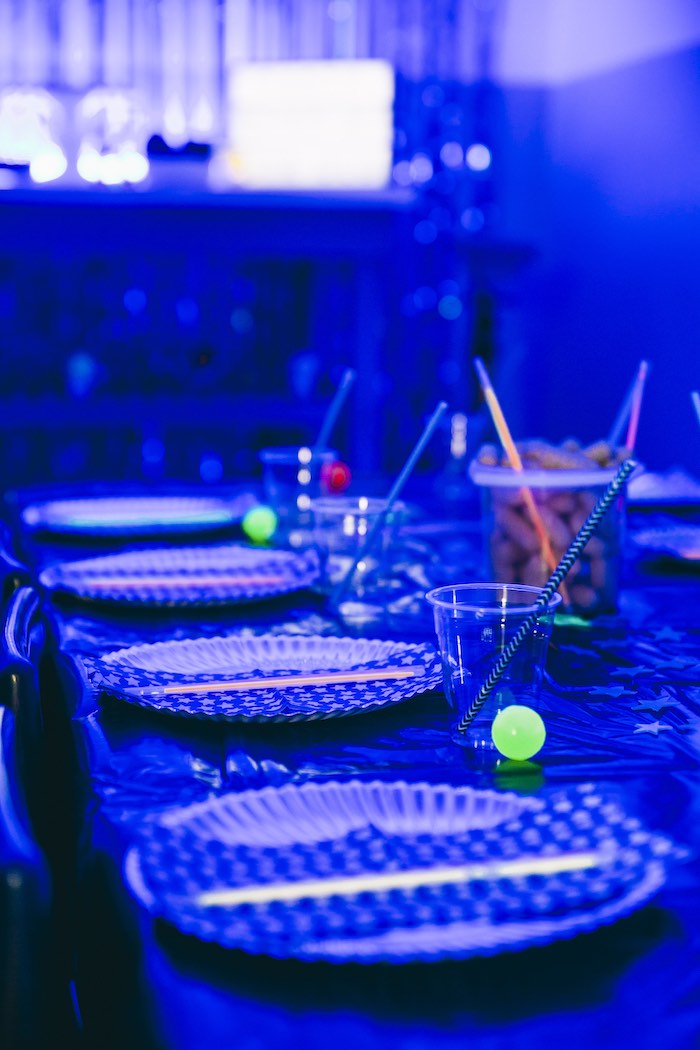 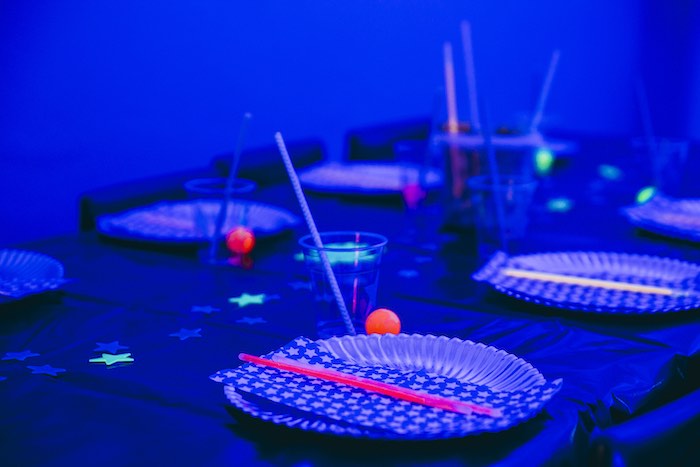 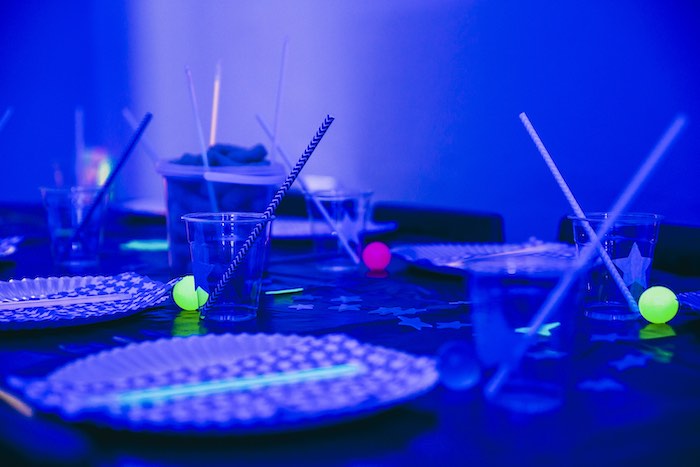 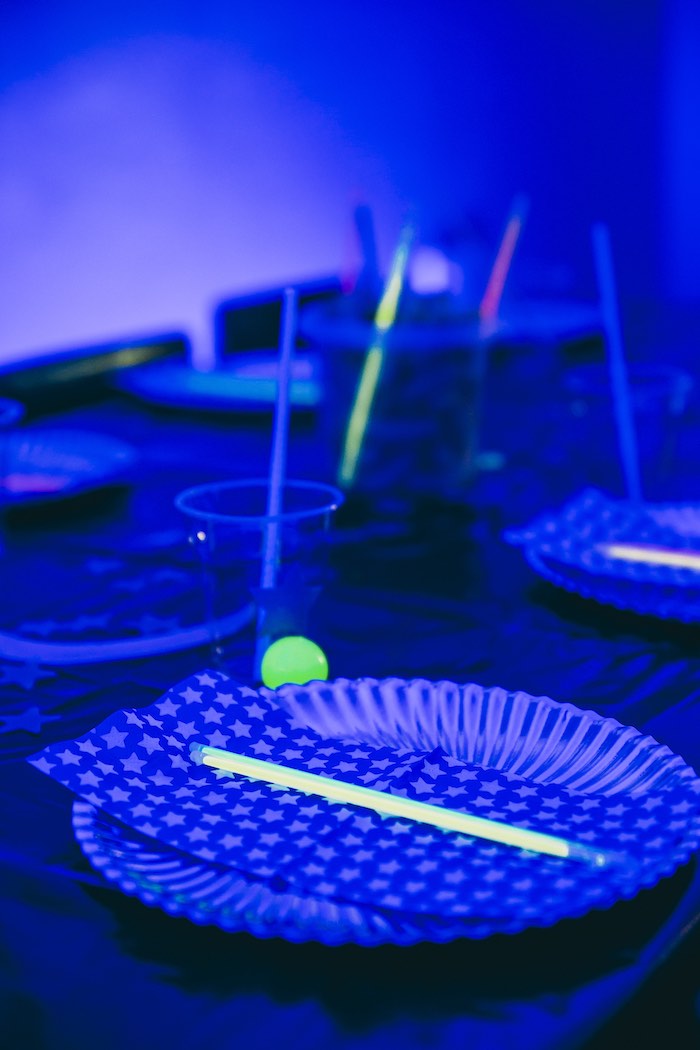 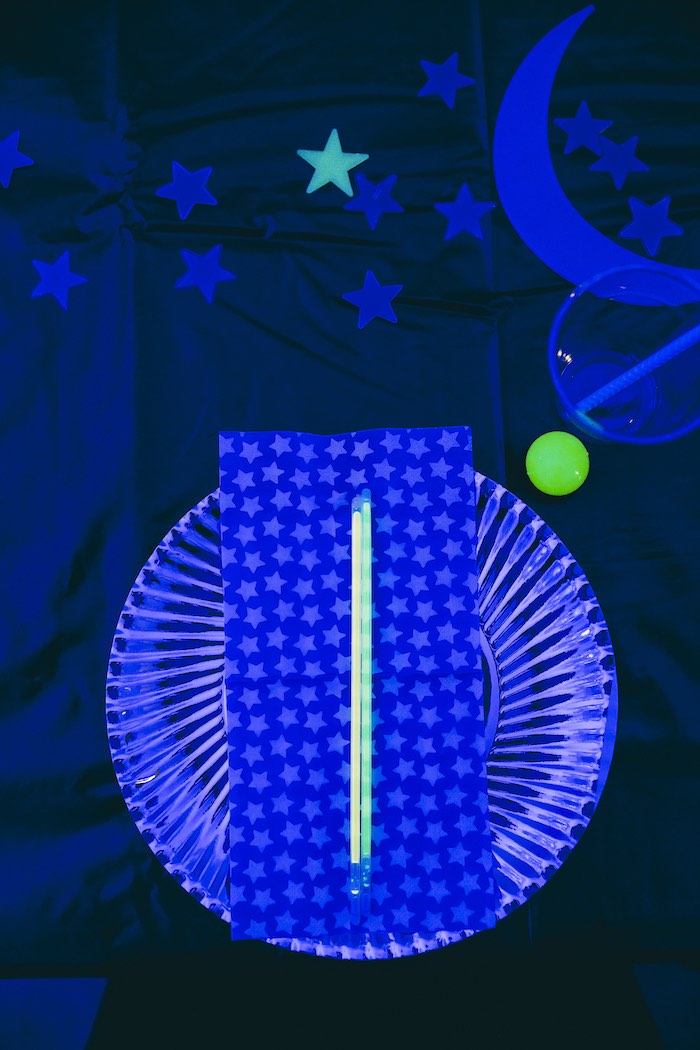 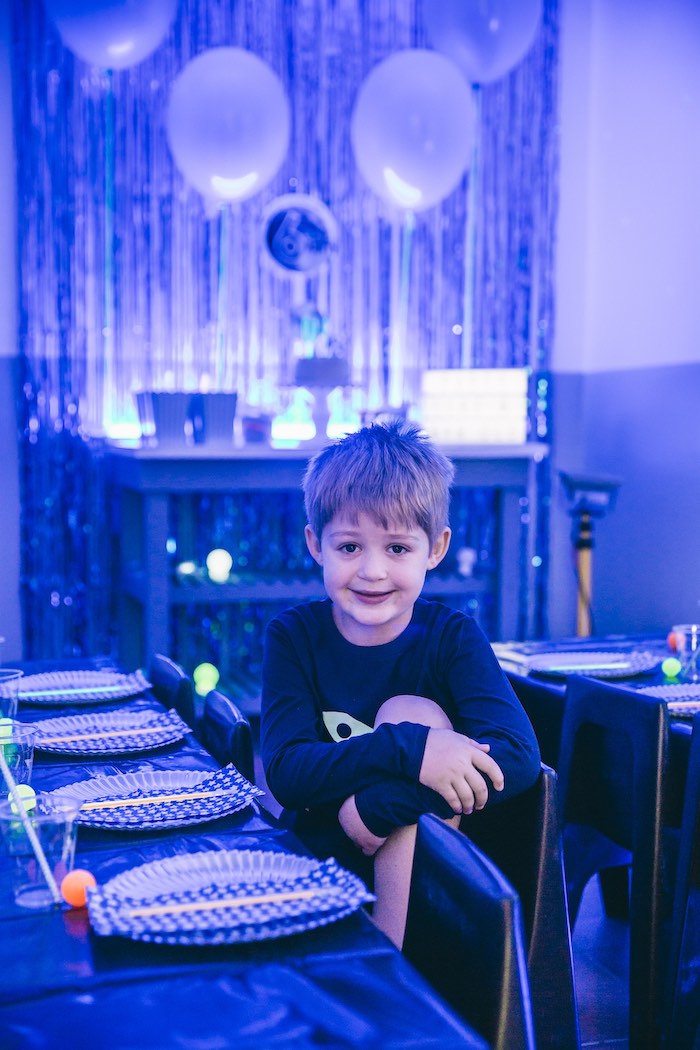 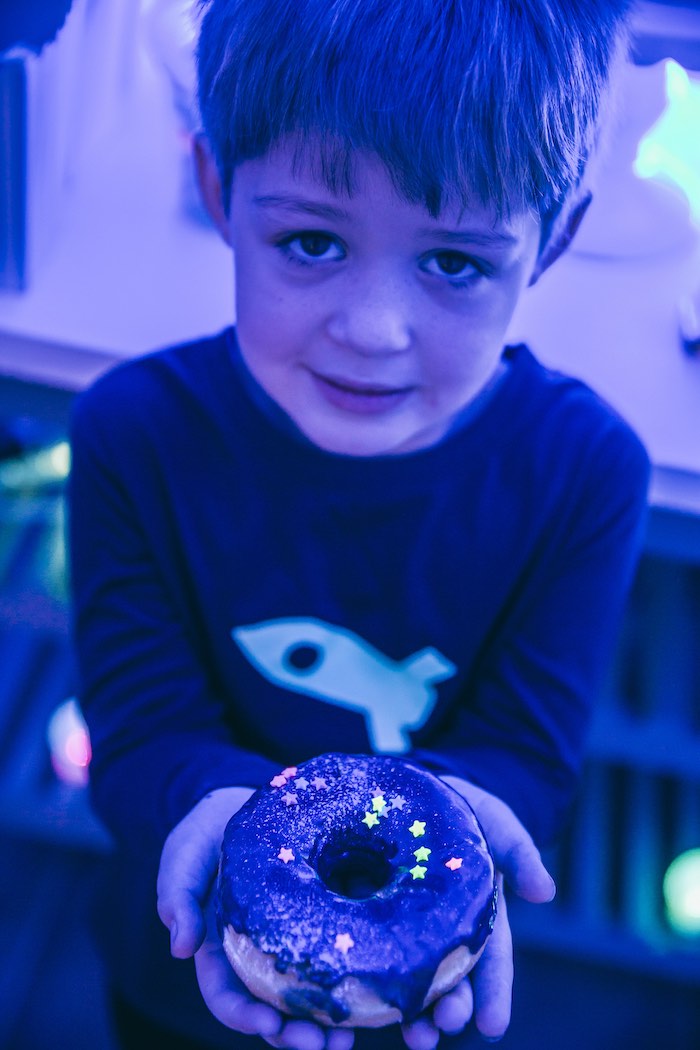 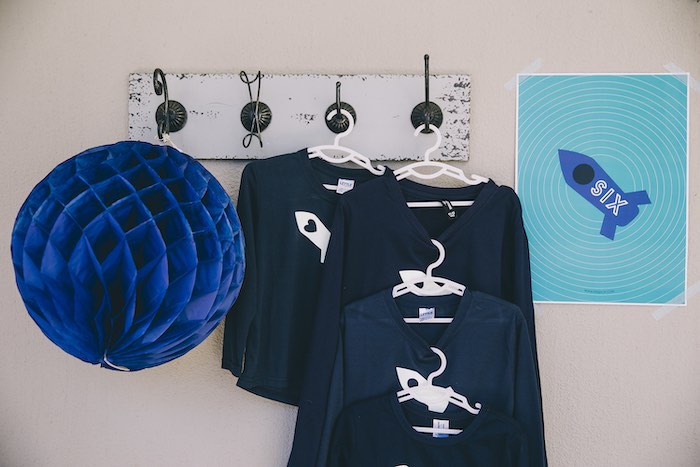 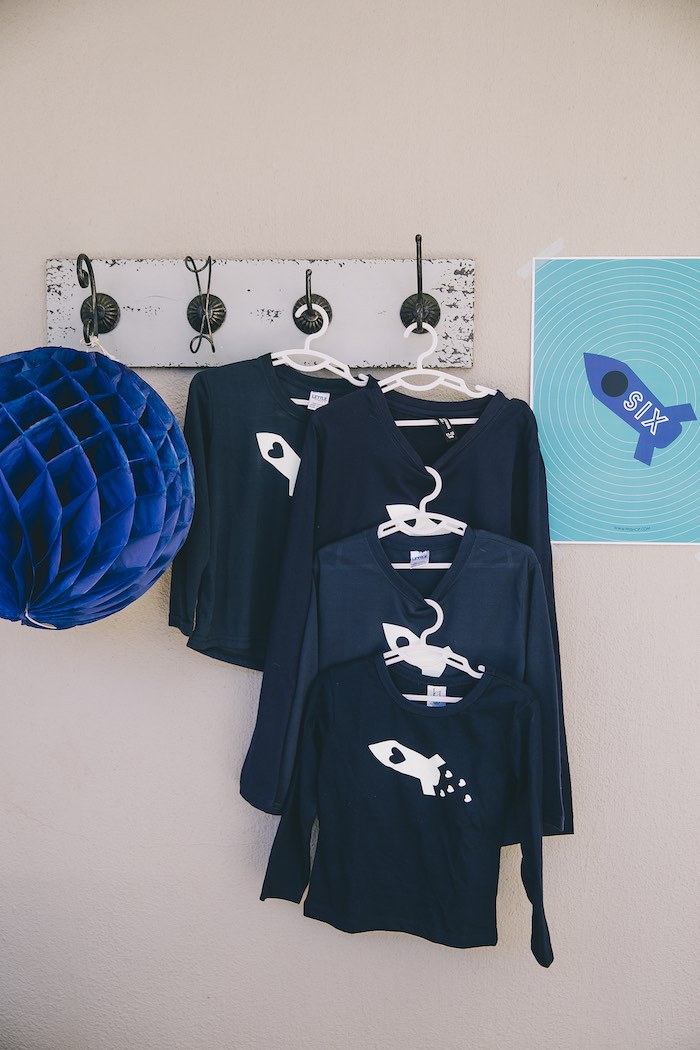 This is what Karen shared about planning/styling the party:

“What to do as a parent when you are totally out of birthday party ideas and your little one wants another car themed party?! The answer is a Glow in the Dark Party and you don’t have to be a professional party planner to ace it. Combining a space theme with glow in the dark party theme just made sense so we threw an ‘Out of this World’ party for our six year old boy.

I researched loads of glow in the dark party ideas on Pinterest and the internet beforehand, there is literally sooooo much that you can do, but I had to contain myself and just start (and stop) somewhere. The process started off with a digital party invitation that I ordered online on Pretty Plane Janes’ Etsy store. I was able to customise some of the colors to match the theme perfectly.

My initial thoughts were that it would be best to throw the party in our garage as it is quite dark inside, even in the daytime, but cleaning it seemed like a huge task and the access to the garage was quite removed from where the adults would be seated. So, I opted to have it our cottage and seal the sliding door as well as the window off with black paint drop sheets. The space was perfect for two long trestle tables that the kids could eat at and then also a candy table set up.

Lots and lots of glow sticks, these are quite readily available at toy stores or party stores.
Neon colored everything! These brightly colored objects will not only pop in natural light but really come to life when exposed to UV light.
UV lights: I was fortunate enough to borrow some from a friend. But you can buy the fluorescent globes at some lighting stores.
A dark room – this goes without saying if you don’t have the dark, you won’t have the glow.
I started preparing the space by adding small glow in the dark stars to the wall (120 to be precise) much better idea than glow in the dark paint. As backdrop behind the candy table I used two foil curtains in a lovilee blue color. I enlarged the image on the invitation and cut it out using it behind the candy table as well. I just had to order some more donuts from Dope Donuts and the neon stars were a hit!

As for the cake, I purchased a mini birthday cake flavored ice-cream cake from Paul’s Homemade Ice cream . It was a HIT! As a topper, I printed out a full moon image. Then, I mounted it on a skewer with some tall candles purchased from Mr. Price Home. And what would a party be without a lightbox?!

Adding some neon bouncing balls and glow sticks to the table setting made the tables pop. I have this thing for gold and silver paper plates and they came in really handy for the tables.

Every year I try to give the friends attending the party something to take home. Something that they can use instead of more sweets. This time around, I made some really awesome (even if I have to say so myself) glow in the dark T-shirts. I used glow in the dark iron-on vinyl. The kiddies just loved it! The shirts ‘charged’ in the daylight and really glowed when they went inside the ‘dark room’ for the festivities.

A big thank you to Carike Ridout who took the photos for me! They were a bit of a nightmare to edit but she aced it!” 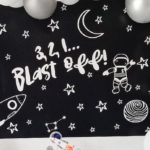 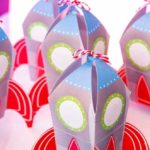 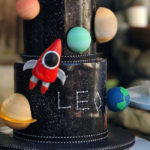