Hey, all of you party animals, check it out! This “ROAR, She’s 4!” Safari Animal Party by Kaylee Brown of Riner & Company is worth talking about!

Swinging in with streaming tassels, sensational safari sweets and the cutest party animal decor, this event will have you roaring out the door!

So, don your party hat and stomp on in because these details are where the fun begins:

“This year, our Paisley Rae celebrated her 4th birthday, and we just couldn’t believe it! We knew we wanted to do something super special for her this year since Covid cramped our party style last year. Paisley loves feeding the giraffes at our local zoo, so her party-planning mama came up with the safari theme to showcase all of Paisley’s favorite ‘party animals!’ The party was titled ‘Roar, I’m 4!’ It was located in Sandersville, GA at Paisley’s grandmama’s house. The guests included her closest friends and sweet family members.

Everyone had the best time selecting their own set of party animal ears from the ‘Let’s Party’ party favor wall. Next, they made their way over to the welcome bar cart featuring snacks from the safari! Snacks included giraffe juice (yellow lemonade), animal crackers with a homemade chocolate chip cookie dip, and peanuts for the elephants.

The cake was a modern, pastel, leopard spotted Art Deco theme accompanied by Paisley’s favorite party animal friends. The cake animals were complete with their own party hats from Chiara Belle Shop on Etsy! Some of the main party snacks included chocolate cupcakes with homemade vanilla buttercream icing topped with the cutest party animal themed Meri Meri cupcake toppers. Locally baked cookies made to match the party decor were all the rage! Also included were the most fun petit fours with leopard and zebra print icing on top.

Partyware included a ‘Party like an animal’ banner, plates, napkins, cups, leopard balloon and party hats. Everything came from the party animal Meri Meri collection. I found it in various party shops including Ellie & Piper Co, The Party Darling and Love of Character. A table setup with Paisley’s closest safari friends was placed in front of the cutest fringe backdrop. It welcomed pieces of this beautiful party ware that inspired the color palette and vibe for the entire day!

Plans were made to hang giant balloons from a tall pecan tree in the backyard for the birthday girl to open her gifts under, but a morning thunderstorm stopped these plans. Instead, the balloon artist and this party planning mama quickly pivoted and decided to hang the balloons on the front porch of the party house. In the end, Paisley had a blast opening gifts with her cousins on the front porch!

It was a great day celebrating this sweet four year old with so many fun details! It definitely was a party we will always remember and cherish!” – Kaylee | Riner & Company 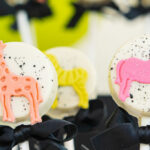 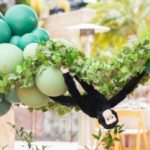